Everything Looks Good in Black & White

Evan Schaeffer of Notes from the (Legal) Underground is being threatened with frivolous litigation by a gentleman who seems not to have enjoyed having his name -- already in the public record -- mentioned in the context of a court decision quoted on Evan’s weblog. Apparently, if this goes badly, Evan expects me to join him in jail for a bit of a kaffe klatch, but that’s getting ahead of ourselves. 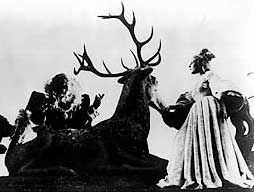 The original reason that Evan reproduced the decision was that its author had secreted multiple references to songs by the band Talking Heads about its person. Clever enough, to be sure, but I cannot but be reminded of Judge Alex Kozinski, of the 9th Circuit U.S. Court of Appeals, who back in 1990 injected some 204(!) film titles in the text of this antitrust decision involving, naturally, a dispute between theater owners.

Finding all 204 titles is, as they say, left as an exercise for the reader.

And while we’re on the subject of film, Michael Blowhard and Rick Coencas (among many others) are singing the praises of movies in black and white. Neither seems to have cited the most gorgeous and magical of all black and white films, Cocteau’s Beauty and the Beast.

La Belle et la Bete. A wonderful addition to the list. My only regret is that I did not think of it first, but I was trying to limit myself to a half dozen or so. Other worthwhile additions might be Sullivan's Travels, Les enfant du Paradis, and Manahttan. And I'm sure Terry Teachout might toss in Rules of the Game.

This is too much fun.

I can't help it - I must add Captain Blood especially on a list of movies to encourage young people to try out black & white movies. It's got everything - a great ship, great swordfighting aboard ship and on the beach; Flynn and Rathbone were never more handsome, DeHavilland more beautiful, the score was great, the fabrics and treasure looked lush and desirable, great cast of smaller roles...Captain Blood, my favorite.