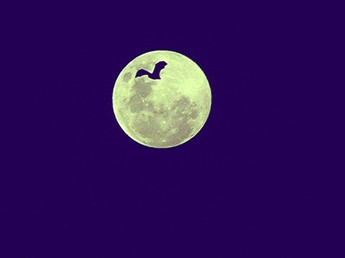 I'm not nearly the fan of Halloween that I once was.  Ever since beer sales became as important as candy sales to the occasion, it just hasn't been the same.  But enough harrumphing from me:

Here, for your All Hallow's Eve pleasure, we offer a tune from Howe Gelb and his Tucson-based band/collective Giant Sand.

This is not a particularly spooky tune -- though the band originally used the more spooky moniker Giant Sandworms -- but it has a fine bleak empty desert quality to it, and begins with the slightly nervous observation that

Something's in the water
Besides a moon that don't know when to quit....

Submitted for your approval,

Bonus Tricky-Treat: By happy coincidence, Alan Williamson has just posted a link at Sixeyes to a live version of "Shiver," recorded in early September.  This is a slightly more scary performance, particularly if you live in morbid terror of feedback, distortion or the artistic influence of Neil Young.

As You Lycanthrope It:  All right, one more, somewhat more directly apropos of the day.  stereogum points the way to Bars & Guitars, whence comes this ruralized cover of the late great Warren Zevon's paean to manicured nails and extra-long sideburns:

[Moon and fruit bat photo by macduncan, via stock.xchng.  Original source for the live Giant Sand recording is here.]

I have a good friend that plays in a band on weekends who can do a perfect WOL, and I find his better than the original...true.

Thanks for the Sanhaimish selections!

That's an old Gerswhin tune, isn't it? "Samhain to Watch over Me"?

Oh lordy, you make me laugh!