The Wharton School of Poetics 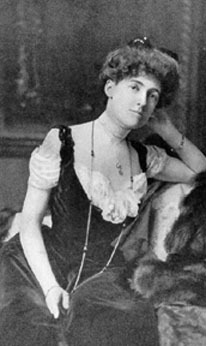 , much better known as the close friend of Henry James and, like James, a tireless fictional chronicler of the oft-cruel workings of human nature, culture and class in the forum of The Novel.  This collection is edited and introduced by the patrician Manhattan attorney-novelist Louis Auchincloss.  this is an appropriate choice of editor: Mrs. Wharton and Mr. James draw several references in the New Criterion's 1997 profile of Auchincloss on the occasion of his 80th birthday.  (Note, if you will, that Mr. Auchincloss stands as a reminder that attorneys who turn to fiction are permitted to write something other than Grisham-style thrillers.)

As a poet, Mrs. Wharton was no trailblazer.  Readers of this volume will not discover some hitherto unsuspected kindred spirit to the likes of Baudelaire or Whitman or Pound.  The poems here all work within well settled and received forms, including the occasional archaisms that marked out the "poetic" voice of the late 19th and early 20th centuries and that work so well to irritate many contemporary readers.  Mrs. Wharton proves to be a highly skilled wielder of those highly traditional tools, with a particular gift for Robert Browning-style dramatic monologue.  In his introduction, Louis Auchincloss goes so far as to claim that Mrs. Wharton's "Vesalius in Zante" "can stand up against almost any monologue of Browning's; only 'My Last Duchess' is its superior."  Well all right then, if you say so.

"Vesalius" appeared in the 1909 collection, Artemis to Actæon, and Other Verse, which is overall a strong collection of verse of its kind.  The title poem posits that the hunter Actæon, far from being punished for his overreaching when his own dogs tore him apart for having looked upon Artemis at her bath -- Titian helpfully provides both "Before" and "After" versions of the usual version of the myth -- was the essential component of the goddess' very existence, one who perceived the goddess' presence in all things natural, who could only achieve his own purest moment by seeing her essence plain, and without whom the goddess (and by extension all the Olympians) comes to nothing, literally bored to death.  The poem, in the voice of Artemis, explains:

For immortality is not to range
Unlimited through vast Olympian days,
Or sit in dull dominions over time;
But this -- to drink fate's utmost at a draught,
Nor feel the wine grow stale upon the lip,
To scale the summit of some soaring moment,
Nor know the dullness of the long descent,
To snatch the crown of life and seal it up
Secure forever in the vaults of death!

And this was thine: to lose thyself in me,
Relive in my renewal, and become
The light of other lives, a quenchless torch
Passed on from hand to hand, till men are dust
And the last garland withers from my shrine.

My personal favorite in that 1909 volume is probably Mrs. Wharton's paean to the cathedral at Chartres, which drives her to a Keatsian, Eve of St. Agnes-style piling up of luxuriant verbiage while simultaneously absorbing the vastness of the empty sacred space (cf. Dover Beach):

Immense, august, like some Titanic bloom,
The mighty choir unfolds its lithic core,
Petalled with panes of azure, gules and or,
Splendidly lambent in the Gothic gloom,
And stamened with keen flamelets that illume
The pale high-altar.  On the prayer-worn floor,
By worshippers innumerous thronged of yore,
A few brown crones, familiars of the tomb,
The stranded driftwood of faith's ebbing sea --
For these alone the finials fret the skies,
The topmost bosses shake their blossoms free,
While from the triple portals, with grave eyes,
Tranquil, and fixed on eternity,
The cloud of witnesses still testifies.

The crimson panes like blood-drops stigmatize
The western floor.  The aisles are mute and cold.
A rigid fetich in her robe of gold,
The Virgin of the Pillar, with blank eyes,
Enthroned beneath her votive canopies,
Gathers a meagre remnant to her fold.
The rest is solitude; the church, grown old,
Stands stark and grey beneath the burning skies.
Well-nigh again its mighty framework grows
To be a part of nature's self, withdrawn
From hot humanity's impatient woes;
The floor is ridged like some rude mountain lawn,
And in the east one giant window shows
The roseate coldness of an Alp at dawn.

To judge by this collection, Mrs. Wharton flirted only once with a shorter line, nudging herself in the direction of imagism or semi-haiku in this piece, not collected in her lifetime, published in the January 1920 issue of the Yale Review:

I
My little dog:
A heart-beat
At my feet.

II  Spring
A winter wind,
Primroses,
And the new furrow.

III  Friendship
The silence of midnight,
A dying fire,
And the best unsaid. . . .

V
A blunt steeple
Over round trees --
Rural England.

VI  Soluntum
Across these giant ruins
The greatest cloud-shadows
Dart like little lizards.

Of Mrs. Wharton it may also be said that she had rather a nice house.