Alfred the Butler Tends to His Gardner

"The lyf so short, the craft so long to lerne"

Matthew Perpetua's FLUXBLOG is usually a pretty-darned-good MP3 weblog, but Matthew recently took a moment to indulge his fondness for The Art of the Comic with a nod [here] to 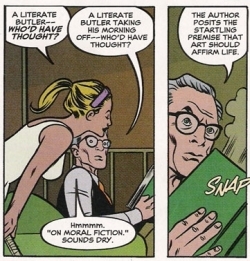 [Michael Allred's] brilliant 'Batman A-Go-Go!,' an ambitious story that makes a strong case for the upbeat, flamboyant Batman of the 60s over the dreary, oppressive Batman of the past twenty years.  The story is as much about Batman's cultural evolution as it is about Allred's pro-joy philosophy of art.  He totally nails it on this page [also accessible by clicking the excerpted detail at right], as Alfred Pennyworth challenges the popular notion that the only valid depiction of reality in art is ugly and relentlessly negative.

The treat here, for me, is the notion that Stately Wayne Manor contains, if only in the butler's private library, a copy of the late John Gardner's On Moral Fiction

, an imperfect but worthy book that I make it a point to revisit every few years.  Gardner was last mentioned here in connection with the operatic adaptation of his novel, Grendel

; I have held Gardner's writing in high regard since I first read that book over 30 years ago.

On Moral Fiction is frequently criticized by people who have never read it, not unlike Allan Bloom's Closing of the American Mind

(though Gardner's book has never sold remotely the number of copies as Bloom's).  Gardner held strong opinions and, as strongly opinionated persons will, not always with basis in fact.

A good portion of the book is taken up with clouting various of Gardner's contemporaries in the fiction game about the head and shoulders for their sins.  Many of those writers are hardly heard of anymore -- meaning either that Gardner was right or that he was wasting his time critiquing minor practitioners.  Of the writers who still appear on the lit'ry radar, Gardner got it wrong as often as he got it right.  Broad swaths of his critique of John Barth are unjustified, to take a prominent example, and he is much too harsh on Thomas Pynchon.  His essential premise, however, was sound and while it may not be the only commendable way in which to approach the writing of fiction, it is certainly one of the most commendable.

As Gardner acknowledged at the time, he let himself in for no end of trouble when he elected to incorporate the M-word -- "MORAL" -- into his title.  Well before the book was first published in 1979, "morality" had come to be seen as the province of prudes and self-important puritanical sorts, and any number of well-read readers had developed a near-allergic reaction to the very idea that the moral and the immoral were worth identifying and separating from one another.  Gardner never held a brief for puritanism (despite his own chronic inability to write a credible sex scene).  His notion of The Moral had more in common with The True and The Beautiful than with Conventional Right Thinking or Good Behavior.  (Alfred's comic-book synopsis above is a major oversimplification.)

In a long posthumously published interview with The Paris Review, downloadable [38 pages, in PDF format] from this page, Gardner gave one of his better thumbnail statements of what he was on about:

INTERVIEWER:
You've recently had essays appear on the subject of what you call 'moral fiction' and 'moral criticism.'  Some readers might have trouble with the word 'moral.'  Could you explain what you mean by 'moral?'  The word, as you've acknowledged, has pejorative implications these days.

GARDNER:
I know.  It shouldn't.  I certainly don't mean fiction that preaches.  I'm talking mainly -- though not exclusively -- about works of fiction that are moral in their process.  That is to say, the way they work is moral.  Good works of fiction study values by testing them in imagined/real situations, testing them hard, being absolutely fair to both sides.  The real moral writer is the opposite of the minister, the preacher, the rabbi.  Insofar as he can, the preacher tries to keep religion as it always was, outlawing contraceptives or whatever; his job is conservative.  The writer's job on the other hand, is to be radically open to persuasion.  He should, if possible, not be committed to one side more than the other  -- which is simply to say that he wants to affirm life, not sneer at it -- but he has to be absolutely fair, understanding the moral limits of his partisanship.  His affirmation has to be earned.  If he favors the cop, he must understand the arguments for life on the side of the robber.

INTERVIEWER:
What would be 'immoral' fiction?

GARDNER:
Mainly, fiction goes immoral when it stops being fair, when it stops trusting the laboratory experiment.  You lie about characters, you make people do what you want them to do.  This is characteristic of most hot-shot writers around now.  I would agree with people who get nervous around the word 'morality,' because usually the people who shout 'immoral' are those who want to censor things, or think that all bathroom scenes or bedroom scenes or whatever are wicked.  That kind of morality is life-denying, evil.  But I do think morality is a real thing that's worth talking about....

[Gardner completists will want to visit the John C. Gardner Appreciation Page, which includes a reproduction of a business card he used while a Visiting Professor at the University of Detroit in the early '70s -- "medievalist, novelist, banjoist, lyric and epic poet - consultant on all subjects" -- and an annotated map [PDF] of Batavia, New York, Gardner's birthplace and the setting for The Sunlight Dialogues, which appears to have fallen out of print.]

In On Moral Fiction, the one of his contemporaries for whom Gardner reserved the most praise was John Fowles, who died earlier this month at the age of 79.  Alan Sullivan's post was the first to bring Fowles' passing to my attention; a good collection of Fowlesian links can be found, naturally, at The Elegant Variation.  Most of the obituaries for Fowles focus on The Magus

and The French Lieutenant's Woman

(which gives the obituarists the added bonus of another opportunity to drop a curtsy to Nobel Laureate Harold Pinter, who wrote the screenplay for the film version

, which was just being published at the same time as On Moral Fiction.  Daniel Martin was Fowles' attempt -- successful in my view -- at the old-fashioned Serious Novel of Character and Ideas, and is notable for the excellence of its descriptions of nature and for the lengths to which Fowles goes, without ever resorting to cheap plot trickery, to keep his two principal characters out of one another's beds until very near the end of its pages.  Daniel Martin's opening sentence would be a good summation of the goal of Gardner's "moral" writer:

WHOLE SIGHT; OR ALL THE REST IS DESOLATION.

You assignment, should you choose to accept it....

Please report back. I may need to come down to LA before March.