Home Archives Profile Subscribe
It is the Best of Times, It is the Versed of Times
One Ringy-Dingy . . . , Two Ringy-Dingies . . .

It's the End of the Year as We Know It

I can't explain how it is that I fell into the habit of posting the work of Thomas Nast for these last few holidays, but it's too late to turn back now.  As 2005 slips out the back looking bleary and sheepish and 2006 jumps out of the wardrobe and shouts "Boo!" there is time for one Last Fast Nast Blast from the Past: 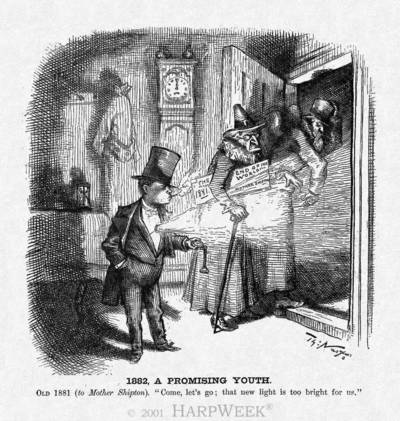 The cartoon is from Harper's Weekly for January 14, 1882.  The online version explains Nast's now-obscure reference:

This January 1882 cartoon in Harper’s Weekly by Thomas Nast confidently closes the door on a false prediction that the world would end in 1881.

Mother Shipton is England’s most well-known prophetess, a British version of Nostradamus, the sixteenth-century French astrologer.  Born Ursula Southeil in 1488, at the age of 24 she married Toby Shipton and became known as Mother Shipton.  She died in 1561.

As with Nostradamus, Mother Shipton's prophecies were written in rhyming couplets; most were highly ambiguous, permitting them to be construed post hoc as having "predicted" notable events of the reader's choice.  The "end of the world" prediction was an exception to the ambiguity rule:


This Harper’s Weekly cartoon refers to the failure of Mother Shipton’s prophesy that the world would end in 1881:

Tis world to an end shall come
in eighteen hundred and eighty-one.

The Old Year angel of 1881 ushers out Mother Shipton, as the New Year youth of 1882 jauntily looks at his pocket watch.  The diamond stud worn by the formally-attired young man lights the exit for the departing elderly couple.  Today, about 100,000 people per year reportedly visit the Mother Shipton Cave and Historic Park in her hometown of Knaresborough, North Yorkshire, England.

I dare say the number of annual visitors to Mother's Cave would be much lower today had the world actually ended in 1881, so her error seems to have paid off in the long run.

Thanks for reading, and a Happy New Year to all.

Mother Shipton is so so scary! ohhh! the end is coming! flee for your life! whatever?!