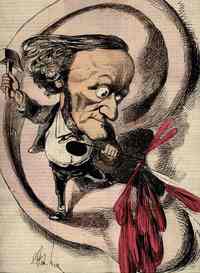 The weekend that I have been anticipating since last July has come and gone and, friends, it was well worth the wait.  I spent Saturday and Sunday alongside my father in the darkened confines of the Center Theater, Long Beach -- in unexpectedly fine seats, second row, dead center -- attending Long Beach Opera's reduced version of the four operas comprising Wagner's Ring of the Nibelung.  In consequence, I am a happy man today.

Alfred Hitchcock was famously disdainful of motion pictures that offered little more than "photographs of people talking."  The equivalent sin in opera, committed all too frequently in many a major opera house, is "striking a pose and singing."  Long Beach Opera has always been a small shoestring sort of an operation, and it has made a virtue of necessity by preferring to emphasize the drama in opera, to present opera on a relatively intimate scale in a fashion that serves the theatrical integrity of the libretto at least as well as it serves the musical demands of the score.

That philosophy places a significant portion of the standard repertoire beyond the Long Beach pale, either because the minimum demands of the work are simply too large to afford or because there is no credible drama to be found once you look beneath the musical trappings.

One would think that the Ring would be emphatically non-LongBeachian on both counts.  If the physical requirements of Wagner's text are taken at all literally, only the most well-heeled of companies can think to attempt them.  There are onstage transformations of characters into creatures large (dragons) and small (a toad), a menagerie of actual beasts including horses and a bear, and scenic locations ranging from mountaintops to riverbottoms with feasting halls, forests, caverns, and fortresses in the sky thrown in for good measure.  Compounding the apparent obstacles, the work is written for an orchestra in the 110-piece range and the vocal strength required to maintain the major roles in competition with that orchestra in a hall of any substantial size is such that the list of singers supremely qualified for those roles has been a very short one in any given generation.  Supply and Demand being the iron taskmasters that they are, those supremely qualified singers are never inexpensive, if they are to be had at all.

Most synopses of Wagner's plot, meanwhile, are sufficient to convince the casual reader that the work is Absurd, and not in a good way.  Wagner's storyline almost succeeds in placing itself beyond parody.  The comedian Anna Russell famously assured listeners in her parodic Analysis of the Ring that she was "not making this up, you know."  And yet . . . the Ring has continued to be sought after and performed around the world since 1874 in large part because beneath its grandiose accoutrements and ridiculous surfaces Wagner's story turns out to be filled with a resonant insight into the human condition that, honestly, warrants its placement alongside the tragic drama of Shakespeare or the Greeks.  And, oh yes, that drama comes wrapped in some of the most extraordinary and subtle orchestral music ever devised.  Richard Wagner was a dreadful, even detestable, human being, but he was nevertheless a supremely gifted creator.  It is a genuine pity that the popular imagination, if it thinks of Wagner's Ring at all, thinks first of perhaps its least subtle musical passage, "The Ride of the Valkyries," and then turns immediately either to attack helicopters or Bugs Bunny.

So, you may ask if you have read this far, how was the show?  In brief, it worked: the production did what it set out to do, and did it exceptionally well.

The four operas were presented over two days.  The orchestra was reduced from Wagner's 110+ players to 25 and was placed at the rear of the thrust stage behind a scrim, at least partly in view throughout.  Large choruses were dispensed with, as were elaborately literal sets.  The action took place on a single set dominated by an expanse of reddish clay/sand and a similarly colored stony ring-like disk --an earthy, earthbound cousin perhaps to the glowing Grail-donut featured in Robert Wilson's recent Los Angeles Opera production of Wagner's Parsifal.  Different locales were created through a flexible lighting scheme and the manipulation of a few movable scenic elements: what director Jonathan Eaton referred to as the "explosion ball" -- a glowing sphere with skull-shaped particles flying away from it (it features in this photo from the earlier Pittsburgh production) --  glowing cloud-like structures and, particularly, a collection of variously-sized headless, Giacometti-esque torsos that served as needed to protray walls, trees and, with the addition of heads, a giant or two.  Masks and puppetry supplied the necessary dragon, toad and chatty forest bird.

Musically, any but the purest of Wagner purists should agree that Jonathan Dove's small-ensemble edit and orchestration does a laudable job of preserving the essential tonal, textural and structural sophistications of the original, and the LBOpera orchestra played it with enthusiasm, subtlety and remarkable stamina.  The sound was as fresh at the conclusion, after ten hours of playing over two days, as it had been at the beginning, and the ovation the players received was duly earned.

Dramatically, the production was a wonderment.  LBO held to its longstanding policy of casting "singing actors," and was able to make use of performers with lungs of a more supple grade of leather than is required to fill a larger space.  As a result, it could cast singers who credibly looked and acted their parts in addition to being able to sing them.  The smaller setting also permitted direct interaction among the performers: conversations between characters could take place at actual conversational distances rather than over the length of a city block, and the closeness of the audience permitted gradations to stance and facial expression that were recognizably human and that could be registered in real time, rather than the broad strokes required to "read" in a more cavernous space.  Underneath all the narrative machinery, the Ring is concerned with recognizably flawed characters -- the Wagnerian gods have at least as diverse a collection of imperfections as his mortals -- confronting, with wildly varying degrees of success, central problems of the human condition, among them love and power, subjection and free will, and the prices to be paid for each.  The smaller scale, and the fact that the text was sung in largely-decipherable English, brought the audience into close contact with those confrontations and concerns.  [Oops: Wagnerian alliteration is apparently contagious.]

There really were no weak links among the performers, no one whose singing or acting detracted from the whole.  A few of the highest high points:

I could go on -- I have nice things I could say about literally every member of the cast if asked -- but this post is already reaching near-Wagnerian length.

To conclude: No one, least of all the principals at Long Beach Opera, would claim that this was any sort of definitive Ring.  What the company attempted, I think, was to present the dramatic essence of the work in a direct and compelling way, enveloping the audience without overwhelming it, aiming for urgency and intimacy rather than raw tectonic power.  In that, I say that they succeeded beyond even my optimistic expectations.  When they recover from their exhaustion after next weekend's final performances, everyone involved has reason to be well pleased.

Or, as they say in the vernacular: Wow.

Incidental and elsewhere:  Checking Technorati to see what any other weblogs might be saying about this production, I discovered that Marc Danziger -- who posts as "Armed Liberal" and draws frequent links in the political weblog world from the likes of Instapundit and Mickey Kaus -- is a member of the Board at Long Beach Opera.  He posted a plug for the LBO Ring in early January, and managed while I was crafting this one to post his own report on the past weekend's performance.  He is exactly right in his description of the Time Suspension Field generated by Wotan and Brünnhilde's farewell on Saturday evening.

At his AOL Journal, Class Act, freelance music critic Robert Thomas was hesitantly optimistic in a January 6 preview of the production.  I suspect he will have a follow-up in due course.  I will link it, and such other reports as I find, in updates to this post.

UPDATE [2055 PST]: Well, now: Mark Swed's review for the Los Angeles Times is up, in advance of Tuesday's print edition, and it is mixed at best.  I don't ask for anything close to my own level of enthusiasm -- Mr. Swed is no fool, and is without a doubt better informed and more experienced in all things Wagnerian than I will ever be -- but the piece still seems unduly underenthusiastic to me.  We do agree on a few central points: he raves for Dierdra Palmour Gorton ["a Brünnhilde of one's dreams"] and is partial to John Duykers' Mime (pointing out Wagner's anti-Semitic sentiments toward the character, which are thankfully nowhere to be perceived in this production).  There is a very nice photo of Karen Driscoll and Gary Lehman as Sieglinde and Siegmund, and you can do a comparative study to see how well disguised Ms. Driscoll was by the tight red curls and tight green dress she sported as Gutrune in Twilight of the Gods.

(Given that he apparently accommpanied Marc Danziger to this weekend's performances, perhaps arch-Times watchdog Patterico will have something to say about this.)

Further Update [011706, 1210 PST]: Patterico's initial thoughts are here; he promises to try to post more when the opportunity presents itself.

Great review, and thrilled that you could come.

Your sister, BTW, is a dear friend of my wife's...small world indeed.

Now if only Long Beach were Dallas, I might have a chance to see the production.

Then again, I usually avoid any and all travel to Dallas, so perhaps it would serve me better at the Granbury Opera House.

The Opera Theater of Pittsburgh production of The Ring, staged by Jonathan Eaton for both Long Beach Opera and Opera Theater, is on stage again, July 14-23, 2006, in Pittsburgh. Wagnerites--new and old--can experience this production on the East Coast when OTP revives The Ring with many accclaimed singers described here and a pit orchestra that last year included members of the Pittsburgh Symphony. Write otp@operatheaterpittsburgh.org to review more info.