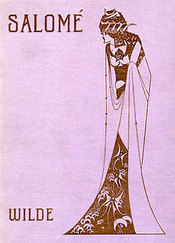 Speaking of lush and decadent works from the late 19th Century, as we were in the Klimt item below, a promotional e-mail alerts me that the Wadsworth Theatre in West Los Angeles is about to play host to a limited engagement of Oscar Wilde's Salome in a "production with music" (not by Richard Strauss) to be directed by Estelle Parsons and starring Al Pacino, presumably in the role of Herod.  Jessica Chastain casts modesty to the winds and essays the title role.

The run will consist of 26 performances from April 14 to May 14.  Tickets become available for public purchase on March 26 -- and are being offered for pre-sale at the moment to those who have purchased a membership in to the theatre proprietors' preferred-playgoer club -- an elite group that does not include this Fool.

It is unclear whether the production has any direct connection to Pacino's 2003 "reading" version of the play in New York, the cast of which included three other past or future Academy Award nominees or winners: Marisa Tomei, Diane Weist and David Strathairn, or the 1992 Circle in the Square staging in which Sheryl Lee was the naughty titular princess.

Of Pacino's 1992 turn as Herod the New York Times reported:

Bejeweled and spangled, Al Pacino swaggers onstage as King Herod in "Salome" and raises his voice almost to a falsetto.  He does not edge into this role; he dives headlong.  It is a daring performance that flirts dangerously with camp but stays strictly within the character, at least the character as Mr. Pacino envisions him.

In the end, his Herod is close to Caligula or Nero.  He would have been right at home on television's "I, Claudius" as a maddened monarch who is so accustomed to having his way that he is stunned when someone, in this case, Salome, challenges him. . . .

As a feat of acting, Mr. Pacino's performance may remind one of Marlon Brando's more eccentric characterizations, his foppish Fletcher Christian in the remake of 'Mutiny on the Bounty,' for example.  But it is heightened by Mr. Pacino's own particular virtuosity and gift for black humor.  It is a performance that obscures everything else on the stage.  This is a good thing. . . .

For added decadence, this is another one of those productions only accessible to those with a currently active VISA® card, a dreadful exclusionary practice of which I have complained once before.

Actually sounds like fun. As a young man, I used to go often to the Silent movie theater on Fairfax (you know the place), and I remember semi-vividly seeing a silent version of Wilde's play, though I don't know if it was the Theda Bara version(1918) or the Nazimova version (1923).

Fool - don't you just have to love Pacino? He is always a joy to watch, even in bad roles.