Let This Be Thy Goal:
Shoot Thou Not the Cyber-Moose

A Pugwash Junction man has been banned from hunting for 20 years and lost his car after pleading guilty Monday to attempting to kill an endangered species last fall.

Robert Lee McLaren, 49, became the first person in Nova Scotia to be found guilty of the crime after shooting Bullwinkle, a full-sized robotic decoy the Natural Resources Department started using last fall to help combat the poaching of mainland moose.

[Link via Sploid.]  No actual moose were harmed in the making of this arrest.

For unrelated robot moose fun, browse the product line of The Robot Factory of Colorado Springs, Colorado, for this fellow, who is also available to drive your Zamboni.  (Scroll to mid-page.)  Frightening video of Robot Factory character products in action (although seemingly none of the robot moose) available here.

That Zamboni-driving robomoose sports the logo of the Rochester Americans, aka "The Amerks", of the American Hockey League.  Indeed, The Moose is team mascot of the Amerks, as can be seen here: 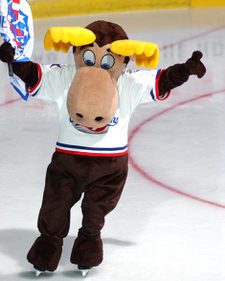 Confusion reigns, no doubt, when the Amerks play the rival Manitoba Moose, and the good-natured Rochester moose must share the ice with Winnipeg's more attitudinal mick e. moose: 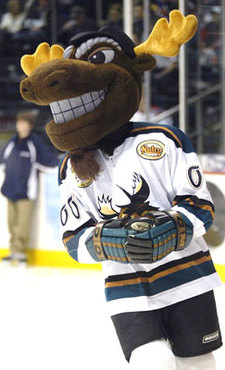 Hey, George, the Amerks were my hometown hockey team, when I was growing up in Rochester, NY. They were formed in 1956, when I was six years old. I probably saw my first Zamboni at the home of the Amerks -- then known as The War Memorial, now known as Blue Cross Arena (subject for another post).

Back in the 60s and 70s, I'm pretty sure there were no mascots skating around in silly costumes at Amerks games. Moose are not, to my knowledge, an important part of the geographic or historical legacy of Rochester. Maybe your crack research staff can find out the origins of the Amerk Moose. (My best guess: Clearance Sale at the Costume Store.)