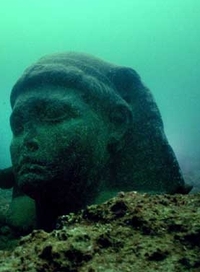 Pointers at 3quarksdaily and Arts & Letters Daily lead to the English language online version of DER SPIEGEL, where we find a long and interesting article on the occasion of the public display in Berlin of a variety of artifacts excavated from the sea floor where much of the antique metropolis now lies.

The 13-part photo gallery accompanying the article features some simply gorgeous underwater photography of artifacts in place beneath the deep.  At left, by way of example, a detail from a larger photograph of a head of Ptolemy XV, also known as Caesarion -- yes, he's the original "little Caesar" --  the son of Julius Caesar and Cleopatra.

The article provides a juicy rundown of Alexandria at its height, of its Ptolemaic rulers and of their various familial, political and sexual scandals, and includes the revelation that the Alexandrian state for a time adopted the worship of Dionysus and seemingly invented Mardi Gras in his honor.  Here is how one parties like an Egyptian:

In 275 B.C., the Alexandrians gave the god of wine a parade, the likes of which the world had never seen -- a procession attended by crowds from as far away as Athens, Thebes, Crete and Ionia.  Some 57,000 soldiers and 1,600 boys carrying costly vessels marched at the head of the procession, followed by 24 elephant-drawn carts and an assortment of exotic animals.  At the center of the caravan, 180 men carried a statue of the god Dionysus wrapped in a purple embroidered coat.  Bringing up the rear was a rolling wine press where 60 satyrs pressed grapes and served wine to the masses through a giant hose.

Lying on the seabed, Ptolemy XV's statue recalls the shattered visage of our old friend, Shelley's Ozymandias, and on the subject of fleeting earthly glory poor Caesarion -- after defeating Anthony and Cleopatra at Actium, Octavian (later the Emperor Augustus) was quick to dispatch his potential rival for the title of Caesar's heir -- and his half-siblings (fathered by Marcus Antonius) feature in several sad poems by their latter day fellow Alexandrian, C.P. Cavafy.  In "Caesarion" (1918), Cavafy imagines himself imagining the young ruler, and is visited by him in a dream as the poem concludes:

And so fully did I envision you,
that late last night, as my lamp
was going out -- I let it go out on purpose --
I fancied that you entered my room,
it seemed that you stood before me; as you might have been
in vanquished Alexandria,
pale and tired, idealistic in your sorrow,
still hoping that they would pity you,
the wicked -- who whispered 'Too many Caesars.'

In "Alexandrian Kings" (1912), Cavafy captures the polyglot vibration of Alexandria in its prime, as Cleopatra's children are presented to the citizenry:

But the day was warm and poetic,
the sky was a light azure,
the Alexandrian Gymnasium was
a triumphant achievement of art,
the opulence of the courtiers was extraordinary,
Caesarion was full of grace and beauty
(son of Cleopatra, blood of the Lagidae);
and the Alexandrians rushed to the ceremony,
and got enthusiastic, and cheered
in greek, and egyptian, and some in hebrew,
enchanted by the beautiful spectacle --
although they full well knew what all these were worth,
what hollow words these kingships were.

Wow! Your pictures are really cool to the eyes. It must be because of the green coloration which is prominent in your work of art.

Is it really the real picture or was the background masked?

May I request for some self portraits of the great men from Alexandria? It will also be more substantial if you include some historical and ancient places.