UPDATE 2010:  This post from May 16, 2006, has been receiving a lot of search-related hits this week in light of the 2010 World Cup in South Africa.  For that reason -- and as a reminder that I have been at this blogging thing for a while -- I temporarily re-published it atop the blog.  It has now disappeared back into the archives.

Here, by the way, is Zakumi, the 2010 World Cup Mascot. He is what you get if poor old Goleo had worked hard for four years to turn "mascot" into one of those much-vaunted "Green Jobs." 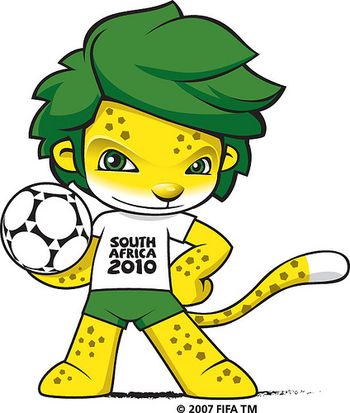 I am no sports fan -- that two southern California teams (the basketball-bouncing L.A. Clippers and the slapshotting Mighty Ducks of Anaheim) are actively in the hunt for their respective sports' championships raises barely a blip on this fool's mental radar-- and among popular sports, perhaps the least interesting of all is soccer.  Sports mascots, however, are a frequent source of amusement (or amoosement, as the case may be).

From Der Spiegel, a sad story of mascot-based marketing gone bad in Germany:

A German stuffed toy manufacturer that has exclusive rights to produce the official World Cup mascot -- Goleo VI, a shaggy-maned lion in a football shirt -- has filed for insolvency because no one wants to buy it.

'The loveable lion', as football's world governing body FIFA describes it, has had a mixed response since he was introduced in late 2004.  Designed by Jim Henson Company, which made the Muppets and Sesame Street characters, the clumsy looking figure has more than a fleeting resemblance to Big Bird.  It has also been ridiculed for lacking football shorts.

Even his debut on a German game show backfired when show host Thomas Gottschalk wondered out loud whether Goleo's grandmother was a llama.

Deutsche Welle also reports the story, contributing its own selection of anti-Goleo insults:

Somebody should have seen it coming.  We live in a superficial age, in which Joan Collins and Linda Evans, who recently got together for a Dynasty reunion, look exactly the same as they did 20 years ago at the peak of the international shoulder-pad mania.  Good looks are important. Good looks will get you anywhere.

Goleo, on the other hand, is not exactly what you'd call an attractive fellow. He could easily pass for an out-of-the-wedlock child of mumbling Star Wars monster Chewbacca and US 80's sitcom teddy-bear starlet Alf.  And now, it turns out, nobody wants to hold him, hug him, and call him George.

The fine gentlemen of FIFA probably couldn't care less.  For all their declared love of sport and international understanding -- which sometimes makes them sound as if they were running a charity founded by Mother Theresa and not an international money-making machine with a surplus of 138 million euros ($178 million) in 2005 alone -- FIFA officials were clever enough to diversify into the obsessive-compulsive world of computer games.  Teddy bears are so 20th century. But the German company, which licensed the European rights to Goleo, filed for bankruptcy on Tuesday.

(Read on to learn more of Goleo's childhood and his deeply Freudian aversion to . . . fishnet stockings.  The German national fondness for nudism is also discussed.)

Here, from the official FIFA Mascot Zone, is the lion in question, settling a dispute of some kind with his pal Pille, an anthropomorphized cephalocentric soccer ball: 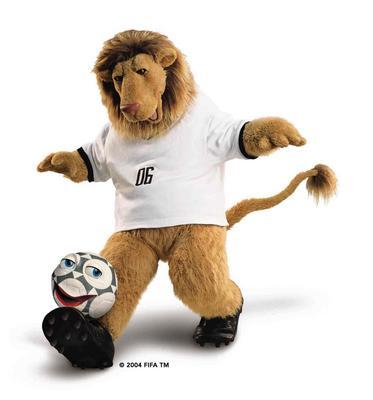 And here are examples of the poorly-selling toys, from the site of the suffering manufacturer: 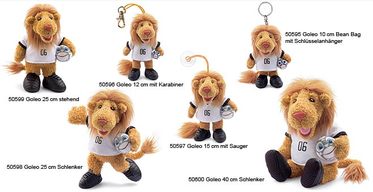 This is such a sad story, George. Even though I, like you, am not much of a sportsfan, one little pantless tear is running down my cheek.