I was a Friedman in Paris (Texas)

Alice Bachini-Smith has joined those who proclaim "Go Kinky!" in the race for Governor of Texas, encouraging the independent candidacy of singer-mystery writer Kinky Friedman. 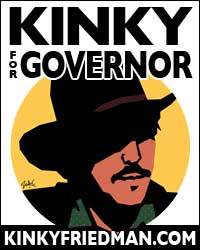 Loyal visitors will recall that last October I noted that the Kinkster was gleaning support from our longtime reader, commenter and most favored Texan, Cowtown Pattie, and from the hardest working haijin in Schenectady,
David Giacalone (whose weblog formerly known as "f/k/a" has just begun to reemerge in its new manifestation as "the haibun pundit . . . . . . ," as David explains here).

I am at a safe remove from Texas politics -- which seems much more exotic than the current brand of California electoral fooferah portions of which I have been reporting at Declarations and Exclusions -- so I do myself no harm by lobbing my own foolish endorsement in the general direction of the Kinkster.  After all, Kinky's not the celebrity governor that I'll be stuck with if he prevails in November.

And one cannot but feel affection for any candidate who engenders this kind of support:

Friends: I love Kinky Friedman!
Kinky is wild, crazy and free
Kinky is a real Texas American nutjob
Kinky is truly independent
A poet, a libertine, a free spirit
A truth-speaker
The last Lone Star in a Sea of Mendacity
I'm talkin' 'bout Kinky -- Kinky -- Kinky .......

Mojo knows whereof he speaks: he heard it from the bats under the bridge.

There aren't too many liberals here in Texas (or hadn't you noticed) so Kinky needs to get the word out that he's got lots to offer Texas Republican voters.

Here's my official list of 10 reasons Texas Republicans should vote for Kinky (I stole this list from a whiney liberal, but I fixed it to take out the whining):

(1) Kinky has run for office in the past as a Republican,

(4) Kinky's public voting records confirm he was mistaken when he said he voted for Gore in 2000,

(6) Kinky wants to take time during the school day for prayers in schools,

(8) Kinky is not obsessed with political correctness,

(9) Kinky knows how to deal with illegal aliens from Mexico, and

(10) Kinky’s immigration policy of hiring Mexican generals to police our border is a great idea that John McCain has endorsed.

If nothing else, the Kinky campaign might de-politicise people a bit, and that would be a good thing. It really is interesting how many people on both sides get upset about him.

Funny that you see Kinky upsetting people on both sides. From what I see, Kinky only upsets the liberals.

PS I enjoy your blog.

Kinky will still get my vote, although I smell a faint odor of politician coming from the Kinkster gubernatorial dream machine - he is selling $1000 a plate intimate "dinner with Kinky" for a fundraiser.

In Texas, everyone knows you dance with them that brung ya...