Strung Out and Parched at the Airport

Among the sufferers under new airline security rules: small winemakers and the peripatetic wine drinkers who love them.  The Los Angeles Times reports:

Passengers jamming multi-bottle wine carriers into overhead bins and under seats were a common sight on flights departing from San Francisco, Oakland and Sacramento airports until [last] Thursday's ban — sparked by the British authorities' foiling of an alleged plot to blow up jetliners.

Since then, unwitting oenophiles have been chugging prized vintages or dumping full bottles of wine into bins with lipstick, sunscreen and other banned liquids.

Each year, hundreds of thousands of cases of wine travel across the country as carry-on luggage, a small but important part of California's $16.5-billion wine industry.

The concourses are slick with the tears of oenophiles as their prized bottles are unceremoniously confiscated and destroyed.  The nation's crazy quilt of laws restricting direct shipment of wine to consumers -- you know, to protect the children -- don't help the situation for thirsty tourists far from home:

Stopping off at a shipping company service on the way to the airport won't help.  UPS and FedEx won't knowingly accept wine shipments from consumers out of fear of violating one of the many regulations that govern the transport of alcoholic beverages.

'If we find out the shipment is a box of wine, we will just hold it wherever we discover the fact,' UPS spokesman Steve Holmes said.  'It might be in the middle of Kansas.  You would have a couple of days to retrieve it or else we are going to dump it.'

If you are prepared to risk the perils of the cargo hold, transporting wine in your checked luggage is still permissible, and some wineries are trying to salvage sales by making that option more convenient.   Per the San Luis Obispo Tribune:

Tablas Creek Vineyard in Paso Robles posted fliers around its tasting room this weekend to alert visitors of the changes and to offer foam packing containers to allow wine to be safely checked in.

The containers — which are given free to customers — cost the winery $2.73 a piece. 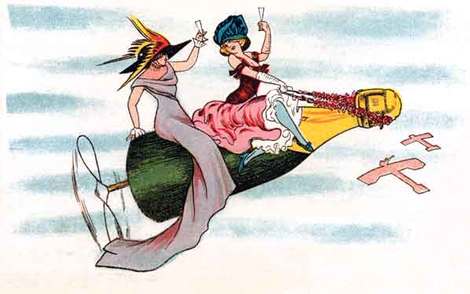 Wine lovers are not the only aesthetes suffering in these troubled times.  Writing at Samizdata.net, Brian Micklethwait points to musician/weblogger Jessica Duchen's report on heightened airline security and the persecution of the performing arts:

I'm sorry to say that the latest on carrying hand-baggage on flights to/from Britain is that violins appear to be a no-no.

Tom has been carrying his violin into the cabin as hand-luggage for 25 years.  Yesterday we hung on for about ten minutes to get through to the airline on which we are meant to fly to France next month, listening to pre-recorded platitudinous messages about their wonderful customer service.  Finally Tom was told by some idiot of a rep that he can put his violin in the hold.  He explained that he can't: it's liable to be smashed by those shot-putting bag handlers, being 150 years old and worth a five-figure sum.  'In that case you can afford to buy another ticket for it,' said the rep, who evidently hadn't listened to the platitudinous messages about their wonderful customer service.

The news is not all bad: "There's no problem with the French internal flight from Nice to Nantes - the rep we spoke to there seemed to think that Britain and the US have gone completely bonkers . . . ."