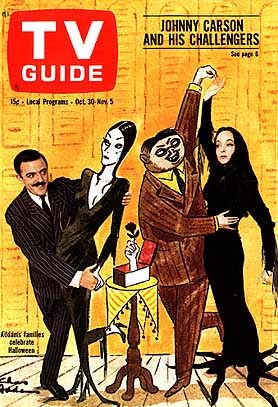 Daytrotter, taking time away from its usual musical orientation, checks in on the earthly avatar of Gomez Addams, John Astin:

'Aristotle said, "Know thyself."  The Addams’ knew who they were.  We were weird on the outside and we were strange, but when you looked closer, you saw that this was really a very healthy family.  There wasn’t a lot of conflict in the family.  We were never telling anyone else how to live.  Moralizing was absent,' [Astin] said.  'They were all about the joy and wonder of life.  It was a creation of magic and wonder that’s rare even today in motion pictures.'

I once met John Astin. It was in the Rexall's parking lot on Beverly and LaCienega shortly after the Addam's Family was cancelled. I must have been around 8 years old and he was a very nice man who spent a few minutes chatting with a young fan. I also had the worlds biggest crush on Morticia (Carolyn Jones).

Several generations have succumbed to Morticia's charms by now.

In the biography referenced in my post, it is revealed (if the reviewer can be trusted) that Charles Addams himself thought he had fallen in love with "the young looking witch," Morticia's pen-and-ink original.  Can you believe she first appeared in the New Yorker in 1938?  Good taste really is timeless.