Home Archives Profile Subscribe
These Spuds for View
Kids! What The Heck'd You Do to Those Kids Today?

The small world of cultural weblogs and the vast spaces of the Dorothy Chandler Pavilion synchronicitized Saturday night.  I attended (with thanks to my parents) the closing performance of the Los Angeles Opera's production of Monteverdi's L'incoronazione di Poppea (The Coronation of Poppea) and I have since discovered that the performance was also attended, all unbeknownst to me, by Meg of xoom, who on Sunday posted a detailed report, well worth the reading. 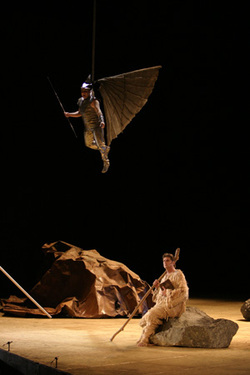 I join in Meg's pronouncement that the production was "stupendous."   I am more enthusiastic than she is over the costuming, which was a beautiful fever dream of  fibers and textures.  Costume designer Emi Wada  has a long and impressive resumé, including Kurosawa's Ran

. (The link through her name is to Wada's own site, which is in Japanese; for readers limited to English, the Los Angeles Times profiled her as she prepared this production.)

I am less troubled than she by the man on man smooching in the Nero-Lucan scene, because it struck me as of a piece with the characterization of Nero as a man who is at all times under the rule of his passions.  He is waxing rhapsodic over his desire for Poppea -- and its more certain consummation now that the pesky sage advice of Seneca is out of the way -- and needs an outlet; Lucan happens to be the object immediately available for acting upon his desire.  Meg is right, though, that a more restrained directorial decision at that point might have avoided undue tittering.  (And you thought opera-goers were "sophisticated," didn't you?)

The opera itself is a wonderment, in which the principal thrust of the plot is the blissful bringing together of two lovers -- the emperor Nero and his mistress Poppea -- who we absolutely know are just the most dreadful people, the sort who will come to bad ends themselves and who will cause the bad ends of many others in the meantime.  The piece opens with a meeting of allegorical figures, in which Love proclaims its superiority over both Virtue (pretty much a laughingstock around here) and Fortune.  For the remainder of the evening, Love is never on the side of the virtuous, but instead intervenes -- occasionally with flames -- on behalf of the lust-driven Nero and Poppea.  In the end, the bad ones triumph and all of the ostensibly better characters -- rather a bad lot themselves, to be sure -- are either dead or in exile.  To top it off, one would expect one of those gleeful, chortling arias typically reserved for Mephistopheles, but no: awful as we know the characters to be, Monteverdi leaves us with Nero and Poppea meltingly swearing their eternal love and devotion to one another.  It is impossible not to succumb to the beauty of the closing duet, for which Monteverdi wrote some of the most purely gorgeous music imaginable.  Cheeky.

I agree that the costumes were really impressive (well, except for Seneca's friends -- I don't follow that reasoning). And even when I disliked the part they played (Arnalta, Arnalta, Arnalta), I still thought they looked great. It's just that I want them to fit into the grand narrative arc, and they didn't always.

Now that you've mentioned it, I can imagine the Lucano-smooching scene done well -- to bring out Nero's derangement and alienation from those who had been friends. But you would have staged it more tellingly than they did, I think. With no titter factor, for a start.

Funny that you were there saturday too. You weren't the handsome man next to me in the front loge with a date who kept begging to leave early, were you? Nah -- you wouldn't have knuckled under and absconded before the final duet was over. Nor, I think, would you take someone who so clearly disliked opera.

I'll let you know if I go to Tannhäuser; I think Mahoganny's not my teacup of gin.