Home Archives Profile Subscribe
"You Keep Using That Word . . . .
I Do Not Think It Means What You Think It Means"
Ash Wednesday Falls on Shrove Tuesday This Year

Weill Bodies:
Mahagonny, but No Ecstasy

Nothing you can do will help a dead man.

Nothing will help him or us or you now.

Those are the bleak twinned messages of the massed chorus that ends The Rise and Fall of the City of Mahagonny.  Several of the principal characters do not join in that chorus, because they are dead and, it follows as the night the day, nothing can be done to help them.

The Los Angeles Opera has mounted a new production of Mahagonny, running through March 4, and I was in the audience on Saturday night.  LA Opera audiences tend to be prodigal in the handing out of standing ovations, but Saturday night was an exception.  A lone patron two rows in front of us stood during the curtain call, but it turned out she was simply cajoling her companion to head for the door, as a number of attendees did even before the house lights came back up.  The downbeat ending is probably not to blame.  (As a critic famous for his sharp ear observed 50 years ago, "What do you expect from an opera?  A happy ending?")  Instead, the fault has to lie with the production, which is not actively bad but which contains an array of false steps that prevent it from gelling into a satisfactory whole.

Mahagonny is the collaboration between composer Kurt Weill and playwright Bertolt Brecht that followed on the heels of their success with The Threepenny Opera.  A short version -- the "Mahagonny songspiel" -- premiered in 1927, the full opera was first performed in 1930, and by 1933 the work had been banned by the Nazis.  "Alabama Song" from Mahagonny is reasonably well known, having been included on the 1967 debut album of The Doors. As with Threepenny Opera, Mahagonny has one foot firmly set in the world of Weimar era political  cabaret, but Weill's score is so much more ambitious and sophisticated Mahagonny that it legitimately qualifies as an opera.  Brecht's text is a true-to-form Brecht text: mordant wit, a dash of decadence, a view of humanity that is profoundly cynical if not outright nihilistic, all washed down with hefty doses of Marxist didacticism.  At this point, the reader may wish to meditate upon the contradictions inherent in putting on such a vigorously anti-capitalist work in a spare-no-expense production with admission prices beyond the reach of all but the scurviest of . . . capitalists.

The plot and characters?  Here goes:  Fugitive criminals Leocadia "the Widow" Begbick, Trinity Moses and Fatty the Bookkeeper found the city of Mahagonny on the spot where their getaway car breaks down. Their plan is to fleece travelers of their money, because "it is easier to mine gold from men than from rivers."  We are somewhere in America, but the geography is decidedly odd: Mahagonny is in the plains or desert, but is near enough to Alaska to attract goldminers and lumberjacks while at the same time being near enough to Pensacola to be threatened by hurricanes.  Lumberjack Jimmy MacIntyre and three friends arrive from Alaska.  Jimmy takes up with the prostitute Jenny Smith.  The city is threatened by a hurricane, which veers safely away in the first moments of Act 2.  Tableau of eating, sex, fighting and drinking follow.  Two of Jimmy's friends die, Jack O'Brien of overeating and Alaska Wolf Joe in a prizefight with Trinity Moses.  Jimmy runs out of money and is unable to pay his bar tab.  This is as great a crime as is possible in Mahagonny, and Jimmy is sentenced to death.  Without money, he is abandoned by his remaining friend and by his lover Jenny.  Unlike MacHeath in Threepenny Opera, Jimmy receives no last minute reprieve.  He is executed.  God arrives and condemns the city and citizens; the city and citizens declare that the feeling is mutual.  Mahagonny devolves to its final chaos ending with the cheerful parting sentiments with which we began.

This production must have looked good on paper.  Director John Doyle  recently mounted  the very well received revival of Sweeney Todd in New York.  That production featured Patti Lupone, and she was recruited to appear here as the Widow Begbick.  Audra McDonald took the role of Jenny.  So with the cream of the New York stage on hand, nothing can possibly go wrong, right? 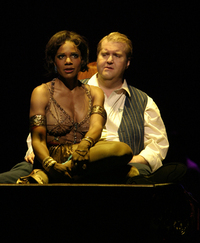 Sadly, this is an opera house production peopled principally with operatic voices.  Audra McDonald has the gift of being able to sing, and act, at a high level in both musical theater and operatic contexts, and made the most of what she was given to do as Jenny.  She spent much of the performance in lingerie and embraced the essential sexual self-interest of the part.

Anthony Dean Griffey as Jimmy brought a fine expressive tenor to the table, and exuded bluff bravado and such sympathy as could be generated for the nearest thing to a hero in the piece.  He and Ms. McDonald -- and the orchestra under James Conlon -- were the evening's musical standouts.

The aid of amplification notwithstanding, Patti Lupone was sadly out of her element.  I imagine that in a more reasonably sized house, and possibly in the more compact setting and smaller instrumental ensemble of the songspiel, she would make an excellent Begbick.  Here, she flounced and sneered heroically, all for naught.

The guiding principle of the production was to pass through time: beginning in the Dust Bowl 30's, moving to swingin' 50s Vegas, and ending in something close to the present.  None of it really mattered much except to give the designers something to do.

And then there is the odd matter of the flag: When Begbick & Co. found the city, they raise the Widow's [enormous] shawl on a fishing pole as the flag of Mahagonny.  We never actually see it flying as a flag, but it reappears as a prop throughout the performance, often dragged or draped in the vicinity of one or the other of the female leads.  Over time, it changes: mostly red to begin with, it becomes red and black later in the first act.  At this point, there is a clunky bit of staging in which a bit of step-point choreography for the entire cast slides into a Rockettes high kick that morphs in to . . . a goose step.  And then -- oh dear, we're not going there, are we?-- the hands and arms start to rise in a quasi-Nazi salute and -- because audiences are dim and we might not have caught on yet -- the theater is filled with a looped and echoed recording of a German crowd sieg heiling.

And then we just move on in to intermission and the idea, which made no particular sense to begin with, is never revisited.

Ah, but the flag returns in Act 2 and continues to transform.  A white stripe appears, and a star or three, blue on white, and -- no no, wait for it, don't run too far ahead of me -- by the time we reach the final curtain, the surviving citizens of Mahagonny are lined up heading out of town and Jenny stands before them with the flag of Mahagonny in a tight triangular fold, as at a military funeral, and it looks like this:

Make of it what you will.  I don't actually think that there is some "America = Nazi Germany" argument being advanced here, given that (1) there is no basis in the work itself for that argument, (2) the argument itself ranks fairly high on the Deeply Lame scale, and (3) if that is what the production wanted to say it could have said it more forthrightly so that we in the audience might actually have known that the message was there to be received and you would not have to receive it from a weblog such as this.

To sum up: a worthy work, with some very fine performances, but sabotaged by fuzzy thinking on the production end and a sad case of miscasting.

Always good to run one last Google search before posting.  I see that the LA Opera has posted some dress rehearsal video of the production on YouTube.  Sound is decidedly iffy, but there are two good Audra McDonald excerpts included and a look at Patti Lupone's laudable effort in a losing cause:

I am a Mahagonny enthusiast, to the extent that this is the third production I have made the point of seeing in person.  All three have been performed at the Los Angeles Music Center.

Back in 1973, the Mark Taper Forum produced the songspiel as part of a double bill with The Measures Taken, a collaboration between Brecht and composer Hans Eissler.  If I recall right, Shani Wallis -- Nancy in the film version of Oliver! --

appeared as Jenny.  Although it was a long time ago, I think that version is still the best I've seen.  Someone needs to revisit the songspiel and give Patti Lupone the opportunity to be all the Begbick that I suspect she can be.

Jonathan Miller directed an earlier production for Los Angeles Opera in 1989, the company's third season.  The Los Angeles Times is stingy with its archives, but you can readily read the so-so New York Times review of that version, set in 1920s Hollywood.  I liked it better than the NYT did.  My sister's presence in the cast has nothing to do with that judgment.

I also caught the long-ago PBS broadcast of the Met's 1979 production with Teresa Stratas as Jenny and -- wouldn't you know it? -- YouTube again provides an excerpt.  Naturally, it is the "Alabama Song."  The clip shows its age and the sound mix does poorly by the orchestra, but Ms. Stratas amply demonstrates the operatic nature of the writing in this smoking performance:

As a bonus, here is Catherine Malfitano performing the song in the 1997 Salzburg Festival production (available on DVD

).  Note that even when the opera is performed in the original German, the "Alabama Song" is written to be performed in English, or a reasonable facsimile thereof:

We need to put him in a separate Appendix so as to separate him from those talented sopranos, ladies and gentlemen, but here to take us well and truly back into the cabaret roots of Brecht and Weill, welcome if you will, performing the "Alabama Song" in Berlin in 2002,
Mister
David
Bowie:

From one MAHAGONNY enthusiast to another, thanks for all of the thoughts about this production, which I wasn't able to attend.

However, I did want to offer one correction: in Brecht & Weill's original, 1927 "Songspiel," the characters of Jenny and Leocadia Begbick do not appeaer. Really, there are hardly any characters, but the two women are named 'Jessie' and 'Bessie,' and I suppose that they are both prostitutes. I understand that there was a version of the "Songspiel" floating around there for a while, which was really more like the actual opera in a stream-lined, vaudeville version. So perhaps this is what you saw, and if it was, I apologize for my posting. In any event, e-mail me some time, as I would love to discuss the work with you more.