Home Archives Profile Subscribe
Store This Away in Your Sac du Printemps
Tonight, on Thuringian Idol!

I've Been Workin' on the Underground Grailroad

Comma lovers, unite!  Here is a lovely single-sentence paragraph from the book I finished reading the other night:

The explanation of so curious a fact, for it is a fact, and not a mere hypothesis, may, it was suggested, most probably be found in the theory that in this fascinating literature we have the, sometimes partially understood, sometimes wholly misinterpreted, record of a ritual, originally presumed to exercise a life-giving potency, which, at one time of universal observance, has, even it its decay, shown itself possessed of the most persistent vitality.

The passage comes from Jessie L. Weston's
From Ritual to Romance

(1919), Ch. IX, "The Fisher King." If Ms. Weston and her book ring a bell for you at all, it is most likely because T.S. Eliot identified them as the source for "the plan and a good deal of the incidental symbolism" in "The Waste Land."*  Scholars are divided as to whether Eliot really meant it, or was simply having us on.

From Ritual to Romance is unabashedly inspired and influenced by Frazer's Golden Bough, meaning Ms. Weston is able to find beautiful young dead, dying, and resurrected gods just about everywhere.  Weston's premise is that the legends surrounding the Holy Grail derive from ancient pre-Christian sources and are outgrowths from and accretions upon rituals and mysteries devoted to maintaining or restoring fertility to the land and its peoples.  The book is great fun, if you have the proper frame of mind for it.  I am inclined to believe that it did influence Eliot, of only a little, particularly in its discussion of the links between the Grail legend, "vegetation rituals," and the suits and trumps of the Tarot.

In many ways, FR2R feels like an early-century precursor to Camille Paglia's Sexual Personae

, though there is much less sexiness in it and Weston's self-regard is not nearly so overpowering as Paglia's.  Each book is a vigorous, engaging presentation of theories that are consistently intriguing, for which the author never fails to find evidence wherever she looks.  Both go wrong at least as often as they go right and both have been mocked by fellow scholars (whose own books are typically not nearly so interesting).  Both are grand intellectual larks, and recommended as such.

FOR EXTRA GRAIL CREDIT: The extravagantly thorough Monsalvat site is a source for all things Grail, at least insofar as they relate to Wagner's Parsifal.  The site includes long extracts from Ms. Weston's Legends of the Wagner Drama, on Wagner's use of medieval sources.

* UPDATE [1320 PDT]: By email, Brandy Karl points me to this 2005 post of hers, linking  to "Exploring 'The Waste Land' - The Poem by T.S. Eliot," an even more elaborately hypertextualized, cross-linked, frame-enabled  version of the poem than the one I linked above.  Thank you kindly, Miz Brandy!

Led on by a pair of intriguing references to it on Henry Gould's weblog (here ["better than Pynchon, . . . (speaking as one who hasn't read Pynchon)"] and here), I spent the month or so prior to embarking on FR2R reading The Underground City (1958) by H. L. Humes, tracked down via the Glendale Public Library.

Humes is a fascinating figure I'd not encountered before.  In 1953, he co-founded The Paris Review with George Plimpton and Peter Matthiessen.  He published two novels in the late 1950's: The Underground City and Men Die.  For a time he served as "agent" for the great hipster monologuist, Lord Buckley.  He was a fixture of New York intellectual circles, even managing one of Norman Mailer's early-60's campaigns for Mayor.  And then he essentially lost his mind.  He lived until 1992, but spent much of his later years living on the streets.  A January New York Times profile gives much, much more on the remarkable history of "Doc" Humes, who is also the subject of a new film by his daughter, documentarian Immy Humes.

TIME magazine, reviewing The Underground City, called it "the most indefatigable first novel of the year," likely a reference to its 755-page length.  The TIME reviewer found it all a bit much, concluding that "there is everything in The Underground City to make it an important novel except a little poetry and some scalpel work by about twelve editors."  A year later, TIME lavished rather more praise on the much shorter Men Die, a tale of racism, the military and high explosives. 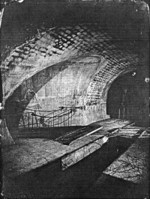 The Underground City begins in post-World War II Paris with the pending trial of Dujardin, a southern French police official who while working with the Resistance has also collaborated with the Nazis.  In the wake of the D-Day invasion, he betrays and causes the arrest of a Resistance group that includes an embedded American, John Stone.  The arrestees -- all, it seems, but Stone -- are executed by the fleeing Germans concurrently with a horrific massacre of the entire population of the village of Montpelle.  The German perpetrators all having been killed in a later engagement -- ironically before anyone has learned of the massacre -- Dujardin is the only person left to be charged with responsibility for the atrocity, although he himself neither ordered nor participated in it.  Stone, who remains in Paris, is the key witness to Dujardin's attenuated role.  Beginning just prior to Stone's testimony, the novel circles back in its long central section to Stone's experiences undercover during the war before returning to Paris in the aftermath of the trial.

Ultimately, l'affaire Dujardin is a mere pretense, a Gallic MacGuffin allowing Humes to explore seemingly everything that was on his capacious mind about post-war France, the challenge of achieving an honorable patriotism, whether "security" should be permitted trump liberty -- Humes's take on that issue is strikingly contemporary -- the mechanics of conducting an undercover arms operation in an occupied country, and (heck, why not?) man's place in the universe.  Stone is something of an existential cipher, but several other characters -- the cynical French Communist Carnot, the Evelyn Waugh-style journalist known as "Sharktooth," and particularly U.S. General-turned-Ambassador Sheppard -- are vividly and memorably drawn.  Given its length and the sheer quantity of material Humes stuffs into it, the novel threatens to outstay its welcome and peters away less than perfectly at its conclusion, although not before treating the reader to a drunken nocturnal tour of the Paris sewers and the unexpected fate (the only moment in the novel that might be called Pynchonesque) of Ambassador Sheppard.

Imperfect it may be, but the quality and intelligence of the writing in The Underground City is very high and the book deserves to find a contemporary audience.  Out of print for the better part of forty years, both of Humes's novels are scheduled to be reissued in Random House trade paperback editions on October 9.  They are currently available for pre-order

MORE HUMESIANA: In February 1963, TIME included Humes alongside the likes of Updike, Roth and Malamud in "The Sustaining Stream," a "recommended reading list of American novelists whose first work has appeared within the last few years."  Here is the Humes passage, which includes a fine one-sentence summation of The Underground City, and gives a further sense of his audacious turn of mind:

H. L. Humes, 36, a founder of the Paris Review and the author of two books, Underground City and Men Die, is a New Yorker who was trained as a scientist at M.I.T. and whose interests include cosmological theory, civic reform in Manhattan, and the feasibility of selling houses made of paper.  Humes's novels have excesses that mark them recognizably as first and second books, but they are rich with life and intelligence.  Underground City, set in France during the Resistance and the early postwar days, is, notably, the only novel in memory that achieves both dignity and passion in dealing with the predicament of the patriot who is not a flag kisser.  Men Die, which is concerned with race hatred and other crippling manias, is audaciously and successfully arty.  The central incident of the book is an explosion that wrecks a Caribbean naval base.  Humes's time sequence begins with the detonation and is hurled about in jagged fragments — precisely the imprecise arrangement of an explosion.  The author gets away with this, which suggests the quality of his skill.  Humes is now at work on a play, two movies, and a scientific treatise in which he hopes to explain, among many other things, the origin of hailstorms and the nature of magnetism.

That article will cause some d'un certain age to wax nostalgic for an era in which TIME's "back of the book" culture coverage was genuinely worthwhile.

Additional fun is to be had in comparing TIME's 1963 assessment with the various writers' later careers.  I particularly like the comments on Philip Roth -- still five years away from unleashing Alexander Portnoy on the world -- and his acceptance of the National Book Award for Goodbye, Columbus: "The tone of the speech was not that of a young tiger intent on astonishing his elders but of an accepted member of the literary world whose high position is beyond the need of proof."  He's still at it, I'd say.

That we really are in 1963 is driven home by this passage, sure to induce a cringe forty-four years later:

Well intentioned but painful, that.  (On a related note: Harper Lee, who gets no more than a dependent clause to herself, is the only woman mentioned anywhere in the piece.)

Next up on my reading agenda, something much lighter than Weston or Humes: Tim Powers' time travel story, The Anubis Gates

, a copy of which I have recently received from MC Rick.  After that, who knows?

If you haven't yet, or recently, secure a copy of John Crowley;'s LITTLE,BIG. A very special treat:find AEGYPT as the long long awaited final book in that quartet, ENDLESS THINGS, is published April 1 - no joke I hope!

I came to it much later than I should have (only about a year and a half ago) but I am crazily fond of Little, Big -- so much so that I have recently splurged shamelessly and ordered a copy of the upcoming very deluxe The 25th Anniversary Edition.

The Aegypt novels are on my long-term radar, but I'm going to have to make a lot of time to get through 'em when I can find 'em.

Meanwhile, I watch the RSS feed from John Crowley's blog.

For another take on the Fisher King, assuming you enjoy the Anubis Gates, you should try Power's
Last Call.