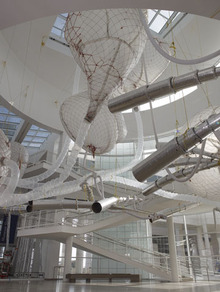 As the Blawg Review Prequel was happily propogating its way through the tubes and into the zeitgeist Sunday afternoon, our museum-appreciating firstborn and I ventured up the Sepulveda Pass to the Getty Center to take in Tim Hawkinson's Zoopsia and Überorgan.  Hawkinson first blipped on the fringes of my attention when his work was incorporated throughout the packaging of Beck's Mutations

album -- a good record, that -- and became a personal favorite when, accompanied by the aforementioned firstborn and with some altogether unrelated purpose for being there, I stumbled all unsuspecting into his terrific 2005 retrospective show at LACMA.

Doug Harvey's thoughtful LA Weekly preview of Hawkinson at the Getty declares that retrospective to have been "the last truly important exhibition" LACMA has hosted -- personally, I think the recently closed Magritte show might qualify, but it is a very close call -- and distills Hawkinson's appeal:

[T]he work conflated the intimate and the spectacular, the formal and the conceptual, and the sublime and the ridiculous to a degree unsurpassed anywhere in contemporary art.

As Harvey notes, that 2005 retrospective lacked one thing in its Los Angeles version: the Überorgan.  Slightly different every time it enters the material world, the Überorgan was originally created in 2000 for installation in the cavernous 300'-long Building 5 at MASS MoCA.  When the 2005 retrospective was in residence at the Whitney in New York, a version of the Überorgan was installed in the lobby of the former IBM Building on Madison Avenue.  The installation in the entry pavilion of the Getty marks the first West Coast manifestation of Hawkinson's monumentally silly contraption.  Although the Getty lobby  is a looming and expansive space and the device amply fills it, this is probably the smallest version of the Überorgan to date.

The beauty of the thing lies in its combination of monumentality and frivolity, weight and levity.  It hangs like a mechanical cloud, elaborate out of all proportion to its function, with its components dangling for the world to see.  On examination, its parts frequently reveal their mundane origins: the junctions and t-connectors from which its various tubes emerge prove to be fabricated from what look like plastic bottles and paint buckets, the "piano-roll" that drives the music is a hundreds-foot long plastic sheet with its markings applied by hand with a Sharpee or Magic Marker.  My favorite little detail: that long roll needs to be kept clean, so as it runs through the reader Hawkinson has it sliding beneath the head of an ordinary industrial dustmop.  The ordinariness of the materials suggests that maybe any of us could construct something this grandly absurd, had we but world enough and time in the proper aisles of our local Home Depot.

Each hour on the hour, it plays for five minutes.  We heard it twice on Sunday -- although it is always playing from the same coded roll, its inner circuitry produces random variations on those instructions so that no two runthroughs are the same -- and it drew applause from the crowd each time.  It hasn't got a beat, you can't dance to it, but it blats and thwops and thrums most impressively.  There's streaming audio of the instrument in action at the Getty link atop this post.

Überorgan is in residence atop the Getty acropolis through September 9.