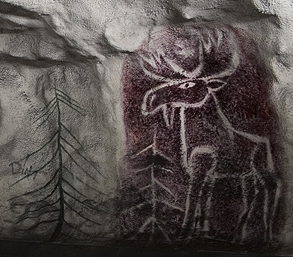 Long ago, what we now term "public art" -- art commissioned by the local temporal authority as an adjunct to large construction projects -- produced masterworks: Bernini's Roman fountains, for example.  Today, when public works projects ostentatiously devote some minim of their budget to art, the results are generally bleak: works that "pay tribute to" or "acknowledge" something or other that We Surely All Agree is Good, works that strive not to offend anyone with a pulse, works that aim for the cute, the kitschy or the clever-clever.  Most of the art incorporated as part of the Los Angeles Metro Rail subway system is no exception.

No, it's not Bernini, it's not even Great Art, but it shows vastly more personality, imagination and oomph than American transit bureaucrats could ever compass.  This fern-filled grotto, and the cave-dwelling moose up above, both come from an extensive series of photos of stations in the Stockholm subway system -- the Tunnelbana -- posted at Ueba.net.   Click through and enjoy: it gets more eccentric from here.

I suspect Alice's white rabbit was on the design committee: he knew a bit about decorating burrows.