Home Archives Profile Subscribe
May the Cubist Be With You
Have You Anything to Declare?

Of course, you have to imagine this passage as being read in the stentorian manner of Mr. Coming Attractions, Don LaFontaine:

The year is 2017.  Global climate change has devastated the Earth.  This is now a cyberworld in constant dread of war.  The state of Denmark has grown prosperous and defended itself successfully against neighbouring states.  But could it be that its greatest threat comes not from without, but from within the state itself?

It is in this cyberworld that we find the young Hamlet.  His grief over his father's recent death turns to something far darker when the ghost of his father appears to him.  Hamlet is very soon to discover that something is rotten in the state of Denmark...

No, this is not your father's Hamlet -- or mine.  This is Hamlet from the new Manga Shakespeare series of graphically novelized versions of the plays from UK publisher SelfMadeHero. 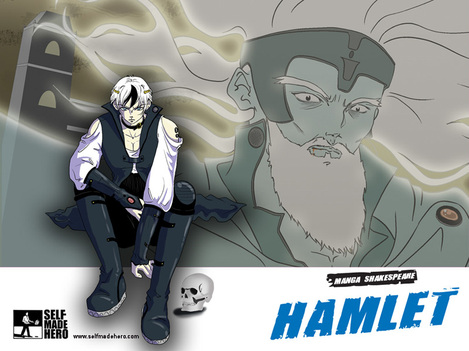 What you get with this series are Shakespearean plots moved to imagined worlds consistent with the manga form -- hence Hamlet in a dystopian future and Romeo and Juliet set "in the highly fashionable Shibuya district of Tokyo" where Romeo (a rock star, naturally) and his love are "caught up in a bitter feud between two Yakuza families."  The dialogue is a cut-down version of Shakespeare's own, as seen in this animated version of the beginning of a Hamlet scene much prized Fools the world over.

The rationale behind these adaptations is the predictable one: to make Shakespeare -- *sigh*, let's all say it together -- "more accessible to today's reader."

Manga is a dynamic, emotional and cinematic medium easily absorbed by the eye. Its attractive art and simple storytelling methods will enthuse readers to approach Shakespeare's work in the way he intended – as entertainment.

Shakespeare has survived worse.  Personally, I am less disturbed by any apparent "dumbing down" of the Bard -- or by the odd use of the verb "enthuse" in that last quote -- than I am by the prospect that we are only ten years away from living in an environmentally devastated cyberworld ruled by Denmark.

Hamlet and R&J came out in March, and are available domestically via Amazon

; the publisher's catalogue [PDF] promises expansion of the series later this year to include Richard III, The Tempest, and A Midsummer Night's Dream.  In the Fall, SelfMadeHero will also launch The Classical Eye, a series of graphic versions of non-Shakespearean literature, starting with selections from Kafka, Poe, and Bulgakov and moving next year to include Stevenson, Wilde, and Dostoevsky.  This cover is certainly striking, although it owes more to Dashiell Hammett's black bird than to Poe's: 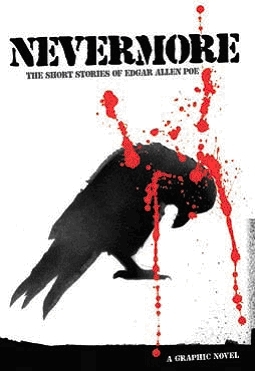 [Manga Shakespeare links via John Holbo on The Valve.  For sheer amusement value, I recommend that you not miss the collection of chibi Shakespeare avatars appended as the first comment to Prof. Holbo's post.]

The Tempest moved to a distant planet in which a scientist lives alone with his daughter and a robot.

I always hated the art in Classics Illustrated comic books, even as a kid. I'm not a big fan of manga style, but at least it abides by its own conventions well.

To what extent does Shakespeare's own lack of originality in plot act as a license for every wannabe dramaturg to send him to Harajuku, the future, or any number of post-apocalyptic dystopias, one wonders.

Call me old-fuddied, call me stale and unhip ( oh to be a wee bit hipless), but the Bard does just fine as a stand alone main course.

He don't need no stinkin' manga...or salsa on the side either.