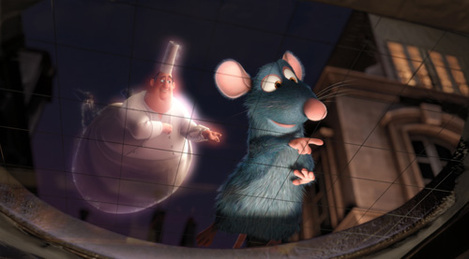 At least since the Reese's Pieces in E.T., we have gotten used to the notion that when food or drink products turn up in a Major Motion Picture, it is almost certainly in the name of product placement.  One of the many satisfactions to be had from Pixar's Ratatouille, which the family caught up with over the past weekend, is the fact that the only branded comestible in the entire film is a (shamefully abused) bottle of 1961 Château Latour (100 pts, pace Robert Parker and others).

Might Ratatouille be The Best Food Movie Ever Made?  Indeed it might, among many other things.  It is certainly the most "adult" film Pixar has yet produced, touching on themes such as art, beauty, love, loss, mortality, memory, and the need to keep guns and poisons out of the hands of astigmatic French peasant ladies.  It is also full of sterling bits of physical comedy and silent expressiveness worthy of Chaplin or Keaton, and boasts a collection of Parisian colors, textures and sounds so appealing that the French government should be pinning medals on all concerned.

The non-childishness of the film may account for its (actual or perceived) box office shortfalls compared to other Pixar pictures.  The business aspects of Ratatouille -- and what they say about the rough patches in the supposedly idyllic marriage of Pixar into Disney -- are being covered in depth by animation/Disney specialist Jim Hill, in stories such as this one and this one.

That last Jim Hill item is worth a scroll for the sake of the lovely photograph of Peter O'Toole, at work recording his role as the fearsome -- but ultimately surprisingly Proustian -- food critic, Anton Ego.  Which serves to remind that in Ratatouille, as is usual with Pixar, voice casting contributes immeasurably to the film's success.  O'Toole is unsurprisingly wonderful, but Patton Oswalt's turn as Remy, the Rat Who Would Be Chef, provides the spine from which all else depends.

Fans of Mr. Oswalt, including those such as myself who encounter him for the first time in Ratatouille, should hasten to pay a visit to Daytrotter.  The online artistic pride of Rock Island, Illinois, recently launched a spoken word venture, "the Bookery," to complement its ever-growing cache of live music recordings, and has this week posted a 7 minute MP3 of Patton Oswalt reading "The Chaser" by John Collier -- a story I first encountered long decades ago in a 6th or 7th grade English class, when I was far too young and unsophisticated to appreciate its witty macabrerie.

Any number of well-respected chefs have remarked on the high accuracy of Ratatouille's portrait of life in a professional kitchen.  I, however, spotted one important gap in all that verisimilitude: the absence of cigarettes.

As anyone knows who has watched the contestants on Gordon Ramsey's Hell's Kitchen, or who has spent time in the vicinity of a culinary school, chefs and aspiring chefs as a class tend to smoke like coal-fired power plants in Ohio -- and, mind you, the chefs in Ratatouille are French! -- yet there's not a Gauloise or Gitane to be seen.  Incroyable!

The explanation is obvious: Pixar, with typical foresight, anticipated this week's decision by Disney to ban depictions of smoking in its films.  And further research discloses that in any case, zut alors!, even in France the Gauloise is extinct.  Poof!

Have You Anything to Declare? And remember: even hard won freedoms may be reversible.