A post at Idolator with a self-explanatory title -- "YouTube Users Post The Craziest Things" -- provides links to a smörgåsbord of musical stylings, ranging from New Order to Roxy Music to Miles and Coltrane, drawn from, yes, YouTube, in the course of which we learn that the Pet Shop Boys, of all people, created and performed a new score for that bulwark of Film Studies 101, Sergei Eisenstein's Battleship Potemkin.  Some enterprising soul has taken the whole thing, as performed in Berlin in 2005, and posted it in 28 bite-sized video snippets.

The YouTube upload has the triple drawbacks of (1) being on YouTube and thus of dubious video quality, (2) being handheld footage of a live performance, and (3) being in 28 bite-sized morsels.  However, a further search at France's Dailymotion turns up a good-quality version of the sequence at which one most wants to take a proper gander -- the Gunpowder 'n Baby Carriage extravaganza that is the Odessa Steps:

The PSBs' score seems not to have been all that well received when it premiered in 2004.  ("[D]ecidedly ho-hum and noodly," said the BBC.)  Should you wish to make up your own mind about it, there is no complete, synced DVD version, but a recording

is available.  For the full experience, you might play it while watching the forthcoming 2-disc Kino edition

of the film.  (Further details here.)

, I have succumbed and am sold on his talent and the fine sweet joy of his Balkanophilic music.

By way of the front page at Daytrotter, I was directed to the clip below, in which we find Condon about a month ago in Paris performing at the premiere Soirée à Emporter de la Blogotheque, singing and flugeling away happily in the company of the real thing, Macedonia's Kocani Orkestar, in a medley of "A Sunday Smile" (from Beirut's forthcoming The Flying Club Cup

) and the Kocanis' "Siki Siki Baba."  It makes for a mighty, high spirited noise, a Franco-Balkan Bacchanal:

The audio from this performance, as well as a recording of "A Sunday Smile" from this year's SXSW festivities, can be had via Alan Wiliamson at +SIXEYES.   Large quantities of Beirut music also available for purchase and download via eMusic.

As a lagniappe, let's toss in the video for Beirut's "Elephant Gun," replete with faux mustaches, faux pachydermulous probosci, faux fin de siecle decadence, a confetti-clogged mandolin, and a horn line I may never be able to remove from my head.  Sing it, Zach!

Maas Media, or, What's a Sema For? 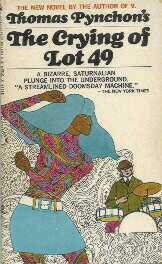 Attention Pynchonophiles and fanciers of cryptography:

Thanks to an email from pal Rick, I am able to point you to this Mercury News article [reg. req'd] revealing the Sinister Secret of the San Jose Semaphore.  W.A.S.T.E no time in checking it out.  Missing the message of this courier would be a tragedy.

If you haven't, you should definitely read the book

(no longer featuring the fine swingin' psychedelic cover  -- and somewhat misleading description -- at right, which is on the edition I've been reading and rereading these past decades.)  There is, naturally, a Wiki to assist the perplexed.

Video of the art work at work can be found on the "Media" page of the official San Jose Semaphore site.