An Audience With the Dalaí LACMA

Salvador Dalí's famous soft watches are nothing else than the tender, extravagant and solitary paranoiac-critical camembert of time and space.

and from Horse Feathers: 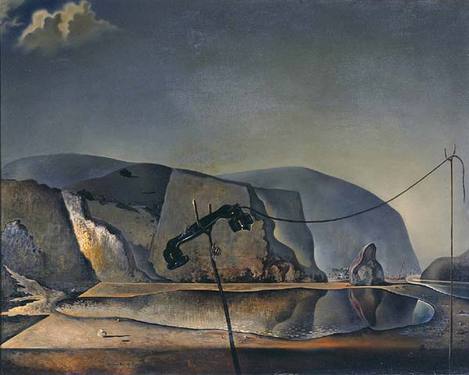 It has been a long time since there was any particular respectability to be had in admitting a fondness for Salvador Dalí, but what's a little disrespect among friends, eh?

The Dalí story follows a sad pattern, one that continues to haunt artists and performers today: a period of sustained brilliance followed by a long, slow decline into repetition and self-parody as the creator outlives his creative gift, often by decades.  The consensus of opinion, from which I do not dissent, is that Dalí peaked early and produced admirable and exciting work into, say, the mid-'40s, but that his postwar period is a lingering embarrassment of game shows and chocolate adverts and endless self-promotion.  Robert Hughes, writing in TIME in 1972, gives a typical assessment:

In the 30-odd years since Salvador Dalí separated from the surrealist movement, he has leaped from one extravagant triviality to the next, combining the roles of circus freak, spangled elephant and Barnum himself.  The performance is tinted with sadness.  Dalí is undoubtedly the last of the great dandies, but nobody accepts his own belief that he is the last of the great artists, heir to Vermeer and Velásquez.  The baroque costume jewelry, the monarchist-Catholic oratory, the worn stock of crutches and soft watches—all have dust on them.  Even the trembling antennas of that fabled mustache have apparently ceased to receive or transmit anything.

Dalí's latest attempt at a comeback . . . is a lugubrious event, more rummage sale than exhibition.  Though it was not conceived as a retrospective, it spans about four decades of his output and so gives some sense of the appalling decline that his talent has suffered. To see some of Dalí's best early work, like the tiny Specter of Sex Appeal (1934), is almost to confront a different painter: somewhere along the line that nightmarish distinctness and mystery of image, in which every speck of paint possessed a tension like the casing of a grenade that was about to explode, vanished.  What replaced it was ornamental theater.

[Hyperlink added.  Hughes tends to be particularly harsh on later Dalí because he so admires the early work, as in this centenary appreciation for the Guardian.]

Dalí: Painting & Film, currently on view at LACMA, spans the entire career, but fortunately skews most strongly toward Dalí's work of the '20s and '30s, with the later weaker work confined mostly to the last two rooms.

The exhibition ran first from June to September in London, and was jointly organized by the Tate Modern and LACMA.  Based on the room guide on the Tate site, the installation and ordering of material in Los Angeles differs in a number of respects from the London original.  (Persistence of Memory and its famed floppy timepieces, for example, show up several rooms later here than they did there.)  The basic structure of the show remains: a chronological survey of Dalí's film projects, the completed portions of which are shown on large screens, intermixed with paintings, drawings, notes and ephemera related directly or thematically to each.

Dalí, it develops, had many more ideas for films than he had completed film projects.  After the two initial collaborations with Luis Bunuel -- Un Chien Andalou

-- Dalí's attempts at cinema were largely hypothetical or incomplete.  First in Paris and then on visits to the U.S., he seems always to have been carrying or working on one film treatment or another, but with little ever coming before the camera:

When in America, Dalí seems always to have had film ideas on his mind.  On his first trip to New York in 1934 -- during which he sold Persistence of Memory to the Museum of Modern Art -- he crafted a scenario and a series of elaborate illustrations for a never-filmed Surrealist Mysteries of New York.  Later, in California, he met and worked with Walt Disney on Destino, which was to have been a 7-10 minute sequence to be included in one of Disney's package films, but the project terminated early and was not completed, or recreated, until 2003.   That 2003 version seems to faithfully approximate what it would have looked and sounded like -- it was to have been a music video of sorts, the soundtrack consisting of a Mexican love ballad called "Destino"  -- and provides a sort of "Dalí's Greatest Hits," as the artist's recurring tricks and obsessions flow by and through one another.  I watched it repeatedly and with pleasure at LACMA, and hope it will someday see a home release.

Destino serves as a pivot of sorts in LACMA's installation, preceding a room of good-to-great paintings (including those persistently memorable watches) that in turn leads on to the long decline.  The later film projects on display are more tiresome than not, combining the increasing self-indulgence of the artist with the increasing self-indulgence of the 1960s to predictably dubious effect.

In Hollywood in the '30s, Dalí struck up a friendship with the Marx Brothers, most particularly Harpo, to whom he sent the gift of a harp strung with barbed wire.  Among the highlights of Dalí and Film are the drawings and notes he created under the Brothers' influence around 1936 for a project to be entitled either "The Surrealist Woman" or "Giraffes on Horseback Salad."  Although a giraffe is tossed from a window in L'Age d'Or, it was not on fire; Dalí's flaming giraffes seem to have appeared for the first time in his conception for the Marxes, where they were to have illuminated an elaborate banquet scene.

The Dalí-Marx collaboration came a-cropper at least in part because of Groucho's skepticism over the painter's scenario, which he thought included too much incident and not enough room for the brothers' free association.  Details of Dalí's plot, if it can be so described, are covered at length in the thorough, abundantly illustrated catalog

that accompanies the LACMA show. 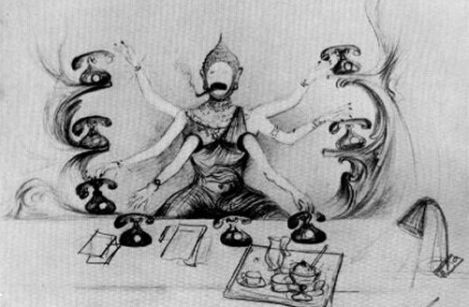 The October 1939 issue of Theatre Arts Monthly reproduced several of the Marx-related drawings to accompany Marie Seton's article, "S. Dali + 3 Marxes=", which sums up the unmade film this way:

The meeting between Dali and the Marxes brought forth a unique scenario, which was outlined by Dali in a series of drawings that now hang on the walls of Harpo Marx's living-room.  These drawings are individually extremely interesting, for Dali, with the delicacy of a Dürer, has taken the characteristic antics and spirit of the Marxes' films and added his own grotesque trimmings to emphasize the character of the comedians as they appear on the screen.  This extraordinary scenario -- which actually became a written script -- never materialized, probably because only a hundred people would have understood it.  The League of Decency, moreover, which imposes stringent rules on Hollywood, would have pruned it beyond recognition.

Dalí and Film continues at the Los Angeles County Museum of Art through January 6, 2008 -- a perfect way to get your holiday-Rose Bowl guests from out of town out of the house -- after which it travels to the Salvador Dalí Museum in St. Petersburg, Florida, and on to Manhattan and MoMA.

After a long afternoon of trudging the galleries, why not relax with a cold and refreshing Bunuel Martini?

Great posting. Being more a film guy, I must say that all of the films up to Destino were the highlight of the show for me. The Bunuel collaborataions, the dream sequence from Spellbound (along with the set paintings), and Destino were all great to see. You are right that following Destino, all that remained were appearances on What's My Line, Dali Pastiche's, and Warhol filming Dali in his (or both of their's) self-indulgent worst.

Two Marxian highlights of the exhibit were the quote of Dali, prominently displayed, in his letter to Andre Breton, "I have come to Hollywood and am in contact with the three great American Surrealists — the Marx Brothers, Cecil B. DeMille and Walt Disney."

And the other being Harpo's response to the harp strung with barbed wire, being a photo of himself sitting at the said harp with bandaged fingers.

I'm going to go have a martini now.

You're just dali-ing with us, yes?

I'll have to bow to Mr. Fleming for the perfect martini served in a large champagne goblet, of course:

Three measures of Gordon's gin, one of vodka, half a measure of Kina Lillet. Shake it very well until it's ice-cold, then add a large thin slice of lemon peel.

Thank you for this post. I just saw this exhibit at MOMA (on the opposite coast from you) and have been looking for an image of the Groucho-Shiva sketch for a week now.

I will have to say that all the Dali works were completely trumped by the 43-foot long Monet "Reflections of Clouds on a Water-Lilly Pond", which we had no idea was housed at MOMA.