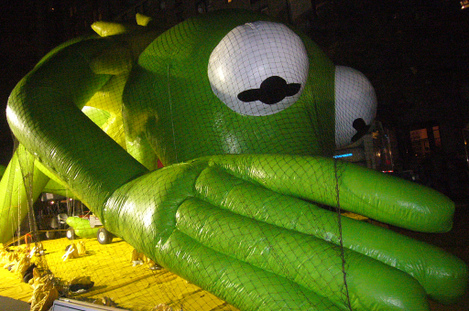 Kermit the Frog, in custody on disorderly conduct charges after hitting the eggnog too hard and too early at the Macy's post-parade reception, learns that being green is rather easier than he had once thought.

Two further, Muppetocentric proofs that, as they say, the past is a foreign country:

Just don’t bring the children.  According to an earnest warning on Volumes 1 and 2, 'Sesame Street: Old School' is adults-only: 'These early "Sesame Street" episodes are intended for grown-ups, and may not suit the needs of today’s preschool child.'

Nothing in the children’s entertainment of today, candy- colored animation hopped up on computer tricks, can prepare young or old for this frightening glimpse of simpler times.  Back then — as on the very first episode, which aired on PBS Nov. 10, 1969 — a pretty, lonely girl like Sally might find herself befriended by an older male stranger who held her hand and took her home.  Granted, Gordon just wanted Sally to meet his wife and have some milk and cookies, but . . . well, he could have wanted anything.  As it was, he fed her milk and cookies.  The milk looks dangerously whole.

Freed from the constraints of pretending to be educational, the Muppets of yore posed even greater dangers to unformed young minds.  The UK weblog of Lawrence Miles catalogs "Nine Things Which Appeared on The Muppet Show, But Wouldn’t Make It Onto Family Television These Days. "  Two examples of many:

[W]hat we forget is that the issue of cross-species fertility is raised even in the original series, specifically in Miss Piggy’s performance of 'Waiting at the Church', a song about a bride being deserted by her bigamous husband on the day of her shotgun wedding.  Piggy performs the song in a wedding dress that’s been bulked out to make her look eight months pregnant.  This image is so distressing that it’s been erased from our collective childhood memory, yet there she is on the screen, reciting the opening lines ‘I’m in a nice bit of trouble, I confess / somebody with me has had a game’ in the finest music-hall tradition.  Four-year-olds in the audience must surely have asked their parents why she looked so fat that week, and it’s doubtful that the phrase 'big with spawn' would have satisfied them.

7. Bombs.  Oh yes.  Bombs in large quantities.  Let’s not pretend that the absence of high explosives in modern family programming has anything to do with recent terrorist attacks: a lot more suspicious packages were going off in ‘70s Britain than today, and yet nobody seems to have connected Gonzo’s 'Defusing a Bomb While Reciting Percy Bysshe Shelley' routine with the IRA, and no episode of The Muppet Show was ever Postponed Due to Current Events.  We really are cripplingly over-sensitive these days, aren’t we?

plies an aged poker player with scotch and fags until he dies happy in his sleep.  Performed by humans, it’s unpleasantly cloying.  Performed by Muppets, it’s just scary.

(Miles announced the closure of his weblog in August, advising those who might want to preserve any of it to "copy the best bits [and] paste them into a Word file".  Just in case it has actually disappeared by the time you want to read it, I have taken the liberty of doing just that.)