Q: How Do You Tell the Difference Between an Islamic Lawyer and a Buddhist Monk?

A:  The lawyers don't dress nearly so colorfully when set upon by the enforcers for repressive regimes. 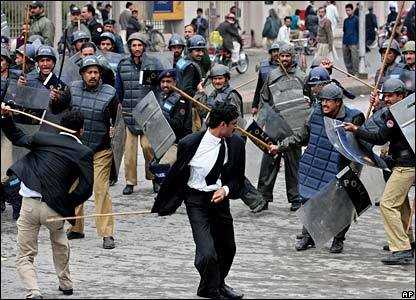 Although this weblog is typically of a frivolous bent, this particular post is not.  It is longer than most and, moreso than is usual here, directed in large part to my fellow attorneys.  But please, read on: there's something for everybody by the time I'm finished.

Anyone following the news of the world in the past few days will be aware of the unilateral suspension of the Constitution of Pakistan by General-turned-President Pervez Musharraf, and also that the principal Pakistani citizens marching in protest and placing themselves in danger of arrest, injury or worse, are lawyers.

As an American lawyer, when I began seeing and reading these stories, my first reaction was one of quiet admiration for the men and women [see below] of the Pakistani Bar as exemplars of the best in our profession in their willingness to risk so much in defense of the rule of law. 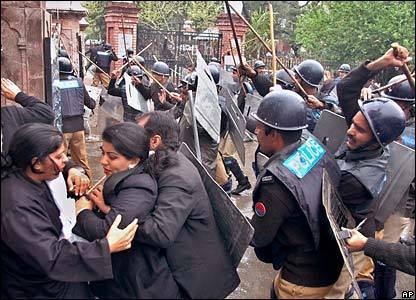 Police in Lahore used batons to try to break up a march by black-suited lawyers in support of Chief Justice Iftikhar Mohammed Chaudhry.  AP photo via BBC NEWS.

My first spoken thought, however, was to my wife as we watched the evening news and went something like this:


"Can you imagine trying to get that many American lawyers to agree on anything, let alone getting them to organize a collective response?  You'd have an easier time forming a drill team of cats!"

At f/k/a . . ., David Giacalone has posted a less flippant meditation comparing the two nations' legal communities, driven in part by a fit of pique with American attorneys who will talk a good fight when it's someone else's Constitution on the line, but who might not be so vocal if the threat were closer to their own home, hearth or wallet:

Pakistani lawyers are indeed acting to support the regime of constitutional law (a bit tardily, some might point out, since Musharraf has always been a military dictator).  But, who in the USA would want to bet the ranch (or the Constitution) on the American legal profession putting itself on the line en masse?  Which lawyers would be out there confronting the military police, risking a bloody head, a night in jail, and a blot on their resumes?

I’d love to think the Bar as a whole — as opposed to a relatively few activists who toil mostly at the fringes of the profession — would be leading the fight against tyranny here in the United States of America, but you’d have to be naive to expect it.

David ends, as a good advocate should, with a call to action:


So, don’t just hug a lawyer, or feel special pride as a lawyer, because the Pakistani legal profession is willing to put its bodies on the line to uphold its principles.  I’m still betting that most American lawyers will talk a good game against tyranny, but — when push comes to shove — will act to protect their wallets and future job prospects first. . . .    Please, please, prove me wrong, Bar America, by sticking your neck out right now — no matter who you might offend — for the American Constitution.

Before he reluctantly concluded that he could be an active weblog reader or an active weblog writer, but not both, David was among the more frequent commenters here.  By a timely coincidence, and without any mention of events in Pakistan, another (non-lawyer) reader of long standing has just posted to highlight a looming danger to our own Constitution.  This particular danger is not so immediate as troops in the street or a knock on the door in the night.  It is perhaps all the more insidious and the more in need of a preemptive response precisely because it comes armed, not with teargas and truncheons or other obvious tools of tyranny, but with far more dangerous weapons: Good Intentions and Broad Bipartisan Support.

Texas Trifles' Cowtown Pattie points to a post at Time Goes By warning against H.R. 1955, the "Violent Radicalization and Homegrown Terrorism Prevention Act of 2007."  [Full text here.]  The bill was introduced in the House by the South Bay's own Jane Harmon (D-CA, 36th Dist.) and has been passed along to the Senate on a vote of 404-6.

By its terms, the bill does little more than authorize the formation of yet another study Commission (at an estimated cost of $22 million over four years), but that Commission is supposed to recommend action, and the bill's aspirations, findings and definitions are sufficiently broad and slippery that it could become, or lead eventually to enactment of, what its opponents label a "Thought Crime Bill."

Lindsay Beyerstein interviewed Rep. Harmon on the bill for In These Times.  (ITT is an unapologetically doctrinaire journal, but the article itself is a balanced one.)  The Good Intentions Paving Company is clearly on the case, looking to build a route backwards to ideas that are only ideas, not imminent actions:

'A chief problem is radical forms of Islam, but we’re not only studying radical Islam,' Harman says.  'We’re studying the phenomenon of people with radical beliefs who turn into people who would use violence.'

That worries Mike German, policy counsel for the ACLU, who calls the legislation 'wrongheaded' because it focuses on ideology, rather than criminal activity. The bill calls for heightened scrutiny of people who believe, or might come to believe, in a violent ideology.  German wants the government to focus on people who are actually committing crimes, rather than those who are merely entertaining violent ideas, something perfectly legal.

The bill’s broad language and loose definitions of 'violent radicalization' and 'homegrown terrorism' also arouse the concerns of many civil libertarians.

The broad wording of the bill leaves open many questions.  If homegrown terrorism is defined to include 'intimidation' of the United States government or any segment of its population -- could the Commission or the Center of Excellence task itself with investigating groups advocating boycotts, general strikes, or other forms of non-violent 'intimidation'?

Here are the core definitions in the bill, with emphasis added for purposes of instilling fear and concern in the reader:

(2) VIOLENT RADICALIZATION- The term `violent radicalization' means the process of adopting or promoting an extremist belief system ['extremist' is an undefined term] for the purpose of facilitating ideologically based violence to advance political, religious, or social change.

(4) IDEOLOGICALLY BASED VIOLENCE- The term `ideologically based violence' means the use, planned use, or threatened use of force or violence by a group or individual to promote the group or individual's political, religious, or social beliefs.

The Congressional "findings" in support of the legislation include:

(3) The Internet has aided in facilitating violent radicalization, ideologically based violence, and the homegrown terrorism process in the United States by providing access to broad and constant streams of terrorist-related propaganda to United States citizens.  [We must maintain the healthful qualities of what flows through our series of tubes.]

(5) Understanding the motivational factors that lead to violent radicalization, homegrown terrorism, and ideologically based violence is a vital step toward eradicating these threats in the United States.  [Our citizens commit bad acts because they are influenced by bad ideas; now if we could just identify and corral those ideas. . . .]

(7) Individuals prone to violent radicalization, homegrown terrorism, and ideologically based violence span all races, ethnicities, and religious beliefs, and individuals should not be targeted based solely on race, ethnicity, or religion.  [Everyone is suspect, so we must be even-handed and suspect everyone.  Cf. the 'Search the Little Old Ladies' Luggage First Act" of 2002.]

(8) Any measure taken to prevent violent radicalization, homegrown terrorism, and ideologically based violence and homegrown terrorism in the United States should not violate the constitutional rights, civil rights, or civil liberties of United States citizens or lawful permanent residents.  [This goes without saying, doesn't it?  There is no comfort in seeing that those who wrote the bill feel the need to provide this "reminder" to those who will implement it.]

Dreadful notions that remain between their holders' ears and do not venture out in to the world are still dreadful, but not so dreadful that they should be targeted or suppressed under a Constitution built upon freedom of thought.  The bill's lack of any definition of what "belief systems" are to be deemed "extremist" only adds to its problems.  The United States has a long history of instances of violence or destruction in the name of ideas that have gained widespread assent: the abolition of slavery, the right of workers to organize, freedom from colonial government.  The actions are not redeemed by the ideals behind them, but are the ideals themselves to be declared "extremist belief systems" because they led some subset of their followers to violence?  This bill invites or directs the Commission to identify means of reaching beyond action and incipient action to ideas qua ideas, and that is a constitutional step too far.

So, particularly to my fellow attorneys, I will not pretend that Rep. Harmon's bill is the only, or the most significant, danger to the U.S. Constitution in November of 2007, but it is a real one.  As David Giacalone urges, it is our role as lawyers to watch over our laws and to protect the Constitution that underlies those laws and the nation.  If not on this issue, then on another: "stick[] your neck out right now — no matter who you might offend — for the American Constitution." 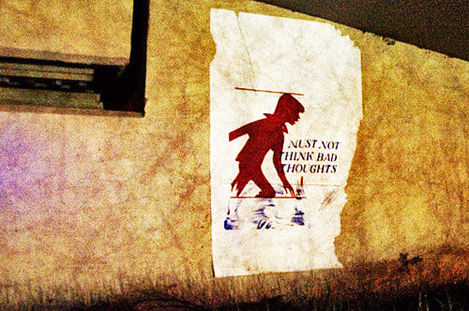 Photo by LiminalMike via Flickr, under Creative Commons license.

So glad I am in good company in thinking that our Congress has finally drunk the Koolaid.

No, strike that...our Wise Leaders, aka "Congress", are trying to convince you and me, Unsuspecting and Apathetic Citizens who surely can't know sheet from shinola to drink the poison-disguised-as-good-medicine.

"Drink up and enjoy life-long safety and protection!"

"What? You're worried about losing a little freedom of speech?"

"Who will be the first to step up to the wagon and buy this amazing elixir?"