Home Archives Profile Subscribe
Do Not Go, John Doe, Into That Good Night
Q: How Do You Tell the Difference Between an Islamic Lawyer and a Buddhist Monk? 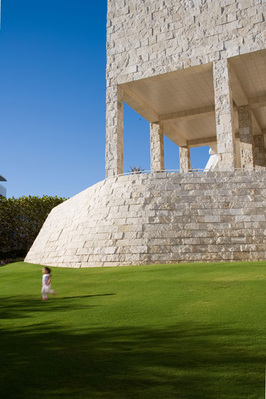 Over the weekend before last -- blindingly bright and unsmudged by the smoke and ash that would follow soon enough -- I had a visit from ol' school chum Rick Coencas.  Rick has commemorated the event on his Futurballa Blog with some photos taken during our jaunt to the Getty Center.  In addition to the shot at right, Rick snapped the Getty's installation of Aristide Maillol's sculpture, Air, the dangerously toxic qualities of which I warned you of last year.

Apart from the highly strollable pleasures of the Getty Center campus generally, our goal was the Getty's encyclopedic retrospective exhibition on photographer Edward Weston, on view through November 25.

Although Weston worked with color photography late in his career, he is best known as a master of black and white.  The persons and objects in a Weston photograph are rendered with exquisite precision -- they are what they are -- while simultaneously evoking the recurring abstract forms of the world.  Consequently

The exhibition also includes a sampling of photographs by Weston's colleagues and students, in which I particularly like this 1921 portrait by Margrethe Mather of Weston himself, lurking on the stairs like Harry Lime arriving 27 years early.

I had not known until I read Judy Graeme's July 25 post at LA Observed's Native Intelligence [caution - post contains early 20th century nudity] that Edward Weston started his professional career as a portrait photographer in Tropico, a little community perched beside the as yet unpaved Los Angeles River.  There is some irony in his being celebrated at the Getty, because it seems he really really disliked this town:

My disgust for that impossible village of Los Angeles grows daily.  Give me Mexico, revolution, smallpox, poverty, anything but the plague spot of America – Los Angeles.   All sensitive, self-respecting persons should leave there. . . .

Which he did, sojourning down Mexico way in the early Twenties where he famously collaborated with Tina Modotti.

The town of Tropico disappeared in 1918, when it was absorbed in to what is now the City of Glendale.  (Hey!  That's where I live.  Small world, huh?)  The Glendale Historical Society is a source for additional information on Tropico -- this map on its site places Tropico in the context of the city as it exists today --  and makes this mention of Weston's association with that long-gone community:

Famed Art Photographer Edward Weston chose Tropico for his home and studio '. . . on account of the peaceful and artistic atmosphere and scenery in and around Tropico.'  In the little early 20th century promotional booklet, 'Tropico, the City Beautiful' by Henderson and Oliver, The Edward Weston Studio is described as '. . . a little flower-covered bungalow, nestled among trees and clinging vines.'  During Weston's residency in Tropico, he was already a nationally renowned art photographer and his popularity was consider to be ". . . the source of bringing to Tropico many prominent artists.'  Tropico is now Adams Hill and the neighborhood still has many artists.

It is comforting to know that Weston could, on occasion, find something nice to say about the neighborhood.

Upcoming:  The Getty is now devoting an entire floor (7000 square feet) in the West Pavilion to displays drawing on its formidable collection of photographs.  In what appears to be a long term program of highlighting major figures in the medium, the Getty will follow the current Weston show with a career-spanning retrospective of the work of André Kertész (opening December 18).