Home Archives Profile Subscribe
Watering the Cactus at Christmas
Who'll Stop the Layne?
(None But Himself) 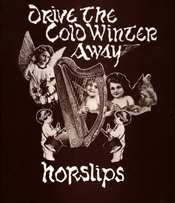 Holiday joy descended early this last week when I discovered that reputable merchants of downloadable music are now offering the complete catalog of the Irish band, Horslips.  Active principally during the 1970s, Horslips pioneered "Celtic Rock," bringing electric guitars and keyboards to traditional Irish music in much the way that Fairport Convention and Steeleye Span did for the indigenous tunes on the other edge of the Irish Sea.

Hugely popular in its homeland -- and highly influential, if the members of U2 are to be believed -- Horslips also achieved more modest success in the U.S., particularly with the title song from 1978's The Man Who Built America.  (The band toured the U.S. in support of that album, and I had the pleasure of seeing them perform at the Whisky a-Go-Go in Hollywood.)

In 1975, Horslips issued what remains my personal favorite Christmas record ever, Drive the Cold Winter Away, a collection of traditional tunes played and sung (sometimes in Gaelic) with charm and infectious enthusiasm.  The album has never been available in the U.S. on vinyl or CD except as an import, so this digital release makes it available to a much wider audience here than it has previously been able to muster.  The entire collection is a delight, of which this wintry ditty may serve as a sample:

As the band observed in the original liner notes:

This is a stereo album . . . .
It can be played on mono reproducers or on Christmas Day; or both.  Happy Christmas.

Drive the Cold Winter Away is available via

Wow, I hadn't thought about Horslips in yonks. I used to have a couple of their albums, back when I thought Steeleye Span hung the moon.

Listening to them on iTunes, though, I see that my tastes have changed somewhat. Still, thanks for the reminder.

At the end of the day, Horslips is a very '70s band, for good or ill. The cover photo on "Dancehall Sweethearts" is pure Spinal Tap, f'rinstance.

What seems to hold up best is the material where they hewed closest to their traditional sources, as on "Drive the Cold Winter" and their terrific first album, "Happy to Meet, Sorry to Part." By the end of their run, they were doing much more generic arena-rock, which really missed the point of what made them unique and interesting in the first place.

And don't get me started on Steeleye Span: Maddy Prior's singing can still reduce me to quivering jelly.

I'm more of a June Tabor girl, myself. One of the happiest days of my life was when iTunes added the June Tabor/Martin Carthy joint album.