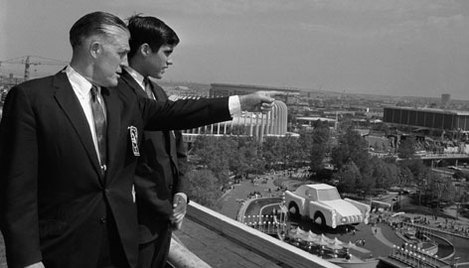 Ross Douthat included the photo above in a post about Mitt Romney and voters' attitudes toward Mormonism.  I am not going to talk about that post, though you are welcome to read it.  The young fellow with the cowlick on the right in that photo is Mitt; the gentleman on the left pointing out the sights is his father, then-Governor George Romney of Michigan, later the first member of the Romney clan to make a run at the Republican nomination for President of These United States.

My reason for reproducing that photo has nothing to do with current events, Romney-related or otherwise.  No, my concern is with the past and with where and when that photo was taken: at the site of the 1964 New York World's Fair in Flushing Meadows, Queens.  I attended the Fair with my parents and the elder of my two younger sisters (the youngest being yet too young at the time), and that trip is one I remember fondly to this day.

The New York fair was memorable for any number of reasons.  Several of the U.S. exhibitors hired Walt Disney to construct attractions for them and a number of longstanding Disneyland attractions premiered in Flushing before being transplanted back to Anaheim: Abraham Lincoln was constructed for the Illinois pavilion; the dinosaurs encountered when circling Disneyland by train come from the Ford pavilion (Gov. Romney's arm is stretching across it in the photo); the now long defunct Carousel of Progress was featured in the General Electric pavilion (accompanied by a very loud demonstration of nuclear fusion, power source of The Future).  For better or worse, the Pepsi pavilion was the original home of the infernally catchy "It's a Small World."  (American tourists were smaller then, too.)

Despite the Cold War, the Fair touted a theme of "Peace Through Understanding," and the world's cultural riches were sent to New York without any of the security concerns of today.  Spain sent prime masterworks of Goya (a clothed Maja, not the naked one); Jordan sent some of the Dead Sea Scrolls.  Perhaps most remarkably, the Vatican pavilion imported Michelangelo's Pietà from St. Peter's.  Eight years later, the scuplture would would fall victim to the sledgehammer attack of Laszlo Toth.  (One viewed the Pietà in New York from a moving walkway, and I distinctly remember it being lit a sort of undersea green.  That recollection is borne out somewhat by the cover of the March 28, 1964, edition of the Saturday Evening Post.)

The New York Fair did not qualify as a "real" World's Fair, as it lacked the imprimatur of the Bureau International des Expositions.  Among other things, the BIE objected to the Fair running over the course of two years.  (True World Expositions are supposed to run no longer than six months.)

The World's Fair bug bit me bad after that 1964 trip.  My contemporaries are welcome to their Summer of Love, but for me the summer of 1967 will forever be the summer of the [BIE-endorsed] Expo 67 in Montreal.  A true Universal Exposition, the Montreal fair was built on the all-encompassing theme of "Man and his World."  It is memorable among other things for the pavilions of the USA and USSR glaring at one another, each nation touting its prowess in the space race.  The Soviets were toasting the 50th anniversary of the Bolshevik Revolution, and were quite chuffed with themselves.  The U.S. Pavilion was architecturally notable as well, designed by R. Buckminster Fuller and housed in an enormous geodesic dome.  Damaged in a fire in 1976, the dome's remnants remain as the Montreal Biosphère.

I ended a nineteen year gap in Expo attendance on my honeymoon, which included several days at Vancouver's EXPO86.  Our last Expo venture was to Brisbane, Australia, for EXPO 88.  We flirted with the notion to taking a run at Seville in 1998, or possibly Hannover in 2000 -- electronic music afficionadi know that Expo 2000 featured an advertising jingle by Kraftwerk -- but those plans came to naught.

There have been no sanctioned world expositions in North America since 1986, and none in the U.S. since New Orleans in 1984.  The U.S., in fact, has not been eligible to host or to participate in an exhibition since 1991, when it was expelled from the BIE for persistent failure of Congress to authorize the payment of dues.  Several Canadian cities are reported to be planning bids for a smaller scale 3-month exposition in 2017, the 50th anniversary of Montreal and the 150th anniversary of the Canadian confederation.

Researching this post, I turned up two notable tidbits relating to the Zaragoza fair.  First comes this little fellow:

This is Fluvi, mascot of Zaragoza 2008.  You may not be able to tell, but Fluvi is "a courageous and funny little drop of water . . [who] will shape a greener and less polluted world with a little help from his friends."  Yes, he's courage, humor, environmental goodness and friendship, all in one soggy little package.  No upstanding mascot such as Fluvi would be complete without an opposite number, of course, so there must be Sec,

formerly "a humble slub," now transformed by environmental contaminants into "an evil being who wants to make everything filthy and vile."  You just know Sec has an incompetent henchman, don't you?  Indeed he does.  Sec is the epitome of the oversimplified environmental villain: he pollutes for the sheer wicked joy of it and he has a lousy HR department selecting his cronies.  Surely he cannot prevail.  (To find out, we will all need to travel to Spain to watch Fluvi, the series.  Be sure not to miss the episode in which Sec reveals "a new design of lavatories that dazzle everybody" but that use waaayy too much water.  It's a good thing there are Fluvi and his pals to stop him.)

Now that you have read this far, you have certainly earned a reward, and here it is: Better by far than Fluvi, it's -- New Bob Dylan!

On behalf of Zaragoza 2008 and in keeping with the exposition's aquiferrific theme, Bob Dylan has recorded a new version of "A Hard Rain's a-Gonna Fall."  This rendition is in the loopy, loping "ol' man Bob" mode most recently on display in last year's Modern Times.  I think that approach defangs the song a bit, but "Hard Rain" is 45 years old now so perhaps it has mellowed with the rest of us.  In any case, it is still a fine song.

A video for the new "Hard Rain" currently appears on the Zaragoza 2008 home page, linked above.  More information can be found on the related Únete a Expo site, including an array of additional Dylan-related videos and the opportunity to download (descargar) an MP3 version for free.  We are all about service here in the forest, so you can also listen or download right here:

Now, I have hunted about through Google and Technorati and Bloglines and the Hype Machine, and so far as I can tell I have beaten all of the other weblogs on the block to the punch in posting this tune.  So, for what little it is worth, I proudly declare this A fool in the forest Exclusive! at least until someone else writes it up and I am obliged to define exclusivity down.  Take that, all you cool kids d'un certain age!  And be sure to tell all your friends you Heard It Here First.

After the jump: the video of my personal favorite version of "Hard Rain."  Stay dry, friends.

I'm happy to report that the Carousel of Progress is not quite defunct. It lives on at Walt Disney World in Orlando and was operating last month when I visited. Apparently, they'll sometimes close it down on days with slower traffic, however.

The last update was in the early '90's, so the last act is once again dated.

The line "Oh grandpa... You're not going to tell us about the days before you even had a car phone, are you?" seems very dated, for example.

Thanks for the kind mention of my ExpoMuseum.com web site.

It has been funded:

The above reactor can burn Deuterium which is very abundant and produces lots of neutrons or it can burn a mixture of Hydrogen and abundant Boron 11 which does not.

The implication of it is that we will know in 6 to 9 months if the small reactors of that design are feasible.

If they are we could have fusion plants generating electricity in 10 years or less depending on how much we want to spend to compress the time frame. A much better investment than the CO2 sequestration.

BTW Bussard is not the only thing going on in IEC. There are a few government programs at Los Alamos National Laboratory, MIT, the University of Wisconsin and at the University of Illinois at Champaign-Urbana among others.

The Japanese and Australians also have programs.

If you want to get deeper into the technology visit:

Start with the sidebar which has links to tutorials and other stuff.

Count on the Fool to be the master of pop culture!

But, sheez, I prefer the original version over that weird new composition.

Makes for a great "what in tarnation was Good King Dylan thinking?"

Bobs will be Bobs, as they say.

I attended a Bob concert several years ago on the Love and Theft tour. He is in the habit of reworking many of the old songs to the point that you won't recognize them until he is quite a ways into it. It took me a few stanzas to identify Masters of War.

Your mileage will vary.