Who'll Stop the Layne?
(None But Himself)

If you search through this weblog, you will find that, although I have never actually met or spoken with the man, I have made more than a few references here to Ken Layne.

I was not following things online much in the late 90s when he co-founded Tabloid.net, but when I stumbled on to this whole weblog business around 2001, Ken's was one of the first blogs to be on my regular reading list.  His posts from that period are long gone: when Ken Layne projects disappear, they tend to leave nothing behind but crickets, tumbleweeds and grizzled 404 errors nursing their hangovers.

Over the past few years Ken Layne's adventures have included the near-miss attempt (with Matt Welch and former L.A. Mayor Richard Riordan) to launch a print competitor to the Los Angeles Times, moving to Reno, editing Nick Denton's now-defunct Sploid, launching the also-now-defunct Highways West site [I surely do miss that one], returning to Los Angeles, and most recently serving as West Coast editor for Denton's Wonkette.  Having moved on again, over the past month or so Ken has re-reactivated his own blog and become a weekly contributor to AOL's Political Machine pages, where he continues to slam away without quarter at the venality and general stupidity so often to be found at large in our great Republic.

All very interesting, but what I want to talk about is music, and in particular the music of Ken Layne & the Corvids.

It has been nearly four years now since KL&tC released their first CD, Fought Down

.  All manner of big time bloggers embraced it at the time.  The Amazon page linked in the previous sentence is still full of rave reviews from Instapundit Glenn Reynolds and other luminaries of the conservative and/or libertarian segment of the blogosphere.  (Given Mr. Layne's profuse expressions of disdain toward the present Bush Administration since the release of Fought Down, I suspect he might not enjoy -- or wish for? -- quite so much support from those same circles today.)

I waxed all enthusiastic over Fought Down here, among other places, and I can report that it still sounds good Even As We Speak.

Through 2005-2006, there were reports of a follow-up Corvids album having been completed.  A demo or two, or a live recording, would surface briefly then disappear back into the depths of the loch, and some streaming versions of tracks appeared (and remain) on the Corvids MySpace page.  The thing itself, however, did not manifest.

In early November, I received an email from Ken Layne himself, telling me that he had some advance CD copies of the album, that he had "misgivings" about it, and would I like a copy?  I certainly would.  (Looking back, I am reminded that I wheedled rather shamelessly for a copy back in July of '06.) 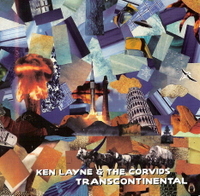 And so it has come to pass that for the past six weeks or so, I have been the proud possessor of a copy of Transcontinental, the legendary or possibly "lost" second Corvids album.  Because I have grown fond of the little critter, I wrote Mr. Layne to tell him so and to ask his permission to write it up here.  I also asked about the nature of those "misgivings" of his.  He has not shared much with me on that point: the thing has just been sitting unreleased for over a year, in which time he has recorded another entire solo collection, and so on.  In any case, he sees no harm in my saying kind things about the CD and, who knows, might even be persuaded to put it out into the world in some form via iTunes or CDBaby or such.  So here are my thoughts on it:

Transcontinental is musically close to Fought Down, straight on alt-country.  The three tracks currently streaming at MySpace ["For What They Did," "Happy McKaye" and "Watching Over You"] give a good idea of the stylistic range.  With the exception of "Happy" though -- which is a proper hoot and which I think of as the song Cormac McCarthy would write if he had a sense of humor to go with his sense of dread, a sort of Blood Meridian meets Butch & Sundance -- those samples don't convey the album's big thematic interests: the 19th century opening of the West, a love for wild and desolate places, and a recurring nervous thread of incipient violence.  It is much more fun than I just made it sound.

I like the entire eleven-song collection -- there is only one track on it that doesn't quite work for me, and even that one ("Rattlesnake Mountain") has a fine air of Parallax View

-style paranoia about it -- but I will single out two songs for special mention:

"Transcontinental" seems to be excerpted from the journal of an unidentified narrator headed west on one of the great wagon trails ["To recall Omaha as we crossed Donner Lake was appealing"] until a time-bending encounter with a helpful bar man in Reno whose useful advice begins with "don't sit close to your TV set."  (Those televisions reappear, alongside piles of ash trays, as the detritus of our era in the closing post-apocalyptic rave-up, "Cenicero.")

"Cuyamaca," meanwhile, is an elegy for the tiny mountain town of that name, where Ken Layne lived at one time, and its disappearance in the 2003 San Diego County wildfires.  The song had extra poignancy the first time I listened, as this year's round of fires were rampaging again through the same area.

It is not for me to say whether Transcontinental will ever be let loose in the world but, Ken, if my opinion counts for anything you can tally this as a vote in favor of putting it out there somehow.  Now, about that solo record....

What's that, kid?  You don't yet have a copy of Fought Down?

There's no excuse for that, since it's still available through CD Baby, Amazon

or, for swingin' DRM lovers,

UPDATE: Many thanks to Matt Welch -- Corvid, Ken Layne compadre, upstanding journalist and bane of McCain

-- for his link to this post.  Thanks especially because Matt took time out to do it while in transit from Los Angeles to D.C. to assume his new role as editor of Reason magazine, a journal to which you really ought to subscribe if you do not already do so.

I took your recommendation some time ago and purchased Fought Down. It is a fine album. Lincoln Town Car being a favorite track that pops up with some regularity on the ipod.