This Fool now continues his policy of countering Rabbitist Hegemony by the annual posting of an Easter Squirrel.

Although they have fallen far out of fashion, domesticated squirrels seem to have been common household companions of young men growing up in the years before the American Revolution.  Two years ago, I posted John Singleton Copley's 1765 portrait of his young stepbrother in the company of a chained and rather put-upon looking little squirrel.  Copley was entrenched as a Bostonian before he emigrated to pursue a thriving career as a portraitist in London, but in 1771 he made a professional jaunt to New York.  Among the commissions he received on that trip were a trio of paintings of members of the Verplanck family, one of which provided Copley the opportunity to revisit his squirrel theme: 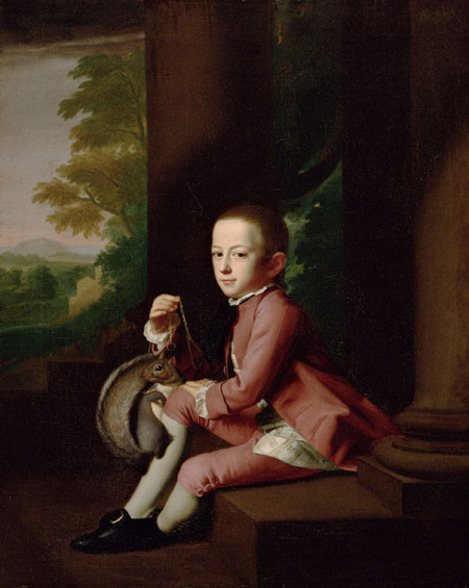 John Singleton Copley, Daniel Crommelin Verplanck (1771), from the collection of The Metropolitan Museum of Art.

My first thought on seeing this picture was that young Daniel Verplanck was rather a small boy, or else he kept company with rather a large squirrel.  The Met's curators are suitably impressed by Daniel's fuzzy friend:

Daniel attended the city's best schools and his parents passed on to him their taste for the finest of everything; his portrait exceeds theirs in grandeur, in keeping with their high expectations for him.  He wears a stylish suit with a brocaded vest and sits on a porch amid imposing classical columns.  His remarkable pet squirrel, which Daniel has apparently civilized through careful training, holds onto his leg without inflicting pain.

As indicated by the fact that they were commissioning Copley portraits, the Verplancks were well established by 1771.  They continued in prominence at least into the mid-20th Century when they did what prominent New Yorkers do: donated their portraits to the Metropolitan Museum.  Copley's portraits of Daniel's father, Samuel Verplanck, and of his uncle, Gulian Verplanck, share a wall in the museum in their very own period room.   (The room is closed to the public until later this year, but you can still take a Virtual Reality Tour.)  After the Revolution, Uncle Gulian was a Speaker of the New York State Assembly; Daniel himself grew up to serve in Congress.  Should you find yourself up the Hudson Valley near Fishkill, you can visit the Verplanck family estate, Mount Gulian.

It may surprise you to learn that the role of Daniel Verplanck and his Remarkable Squirrel in American art history does not end in 1771. Some 188 years later, Joseph Cornell rediscovered the plucky pair and promptly did with them as he did with so many other cultural referents.

He put them in a box: 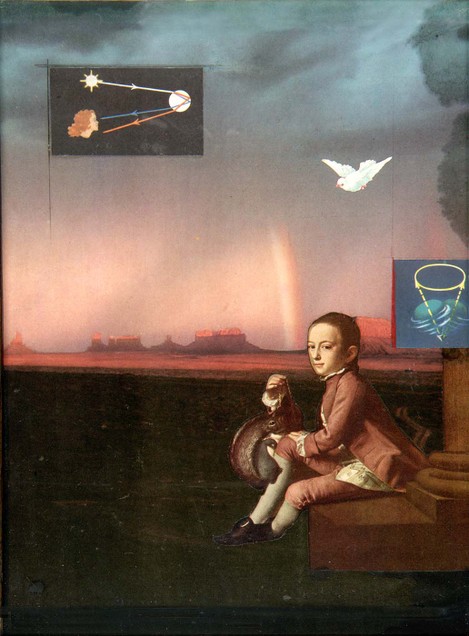 Joseph Cornell, Americana: Natural Philosophy (What Makes the Weather?) (ca. 1959), from the collection of the Smithsonian American Art Museum.

And a particularly attractive Cornell box it is; also very Easter-like, what with the dove and rainbow and such.  Happy Easter to all.

For completists, here are links to all of our prior years' Easter Squirrel posts:

I'm reasonbly certain that the Cornell you include here is a collage and not a box.

...is it a surprise to some people that squirrels can be kept as pets?

Glad to see a squirrel in a different pose! Did you notice that most of your previous squirrels are in the exact same pose? I think they are the same squirrel! Who is copying who?