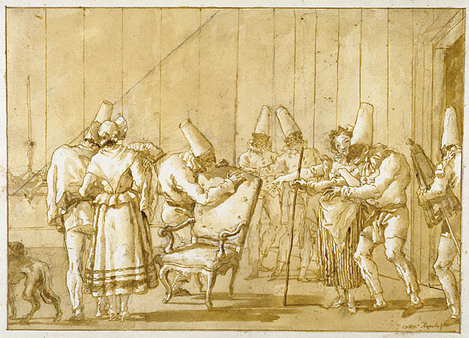 This is the quasi-official adjunct to Blawg Review #153, now appearing on my legal weblog, Declarations and Exclusions.  For the past two years, the post here has been termed the April Fool's "Prequel," but April 1st falls after Blawg Review Monday this year so I have renamed this the "Appendix."  Clear enough?  Splendid!  Let's move on.

Last year, our theme derived from the medieval Ship of Fools.  This year our Fool of choice is Punchinello, as embodied in two generations of 18th Century Venetian artistic foolery from father and son artists Giovanni Battista Tiepolo (father) and Giovanni Domenico Tiepolo (son). 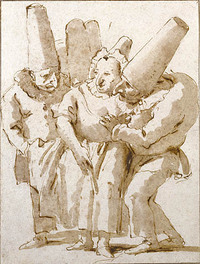 Tiepolo patris was internationally successful, particularly as a painter of elaborate religious, mythological and allegorical frescoes.  Tiepolo filii grew up assisting his father, but his own career took him in a smaller scale and often more secular direction.  Both men at one time or another devoted time to the depiction of Punchinello (or Pulcinello), the tall-hatted, long-nosed stock character from the commedia dell'arte.  Domenico grew so partial to Punchinello that he produced well over one hundred drawings and paintings depicting the character's birth, life, death and beyond.  A smattering of both artists' pulcinellalia is spread about the grounds of this post for your perusal, pleasure, and bewilderment.

The posts selected for inclusion in this Appendix divide, like Gaul, into three parts:

First, we look to recent posts from lawyers or law professors who write about Something Other Than the Law.  That "Other Than" has been the focus of this weblog for almost five years now, and it was the subject of an expostulation of mine last week in a post at Decs&Excs:

The practice of law does not take place in a vacuum, but in a vast and multifarious Real World full of fellow human beings and of social, economic, political, natural, and cultural tidal forces, and the practice can only gain from the attorney's engagement with that larger context.  Also, writing about All That Other Stuff is frequently just more fun than writing about the law.  So, while there is undoubtedly ample room for additional well-written law blogs, there is even more room in this world for well-written, lively non-law blogs from well-rounded, lively lawyers.  Heed the call!

The Anonymous Editor of Blawg Review suggested I follow up on that thought here, and I am nothing if not biddable in this regard.

Second, we turn to posts that while law-related are nonetheless . . . odd, or foolish, or otherwise appropriate to the First of April.

Third, and to conclude on the lowest note possible, we ask the sensitive and tasteful to avert their eyes and their mice as we link several posts found or submitted this past week that qualify as Naughty or Rude or Potentially (or Actually) Offensive.

Part the First: Lawyers Getting Away From the Law 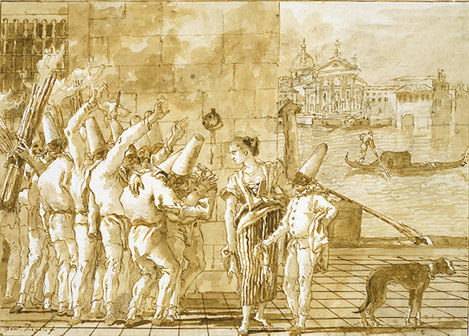 New Orleans' Ernest Svenson, better known as pioneering blawger Ernie The Attorney, has spent the past several years writing much more about Life than Law, but the life of the Legal Blogger remains a major concern.  This week, he noted the important lessons go-go-go bloggers might draw if they would but recall how the tortoise beat the hare.  Quoth Ernie:


The mainstream media has been serving us 'stupid pie' for years. . . . [A]las, it appears that popular bloggers with continuous partial attention disorder are doing the same thing. 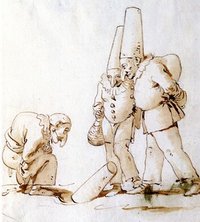 David Giacalone of f/k/a ["formerly known as" ethicalesq and/or shlep] is a long-time denizen of the non-law weblog world (and a longtime friend of this weblog, it must be allowed) with an almost punditry-free emphasis these days on the art of haiku.  Every so often, however, he cannot resist weighing in on a legal story, as when he takes us all to task for ignoring the case of the "toilet paper check."  {For what it may be worth, David, it sounds like a proper negotiable instrument to me.]

David has also held forth recently on subjects as varied as spatulas and the Ides of March.

I started reading Doug Simpson's Unintended Consequences several years ago when it was still a more-or-less conventional insurance/risk management weblog.  More recently, it has converted wholesale into a thoughtful site devoted to climate change issues.  This week, by way of example, Doug reported: "Study documents hotter, drier American West due to climate change.

Also on the environmental front, Leon Getter's SOX First blog -- which is not about baseball standings, but about the Sarbanes-Oxley law -- points to a Winston & Strawn paper on the Carbon Principles being proposed by a number of large lenders, calling for the imposition of "enhanced diligence" in the disclosure of the potential climatic impacts of borrowers' projects as a condition to obtaining funding.

Donn Zaretsky's Art Law Blog manages to have it both ways: It's about Art and it's about Law!  Sort of my idea of heaven, but that's just me.  This week, the intriguing case of Robert Schoenberg's trash, in which Donn points to the Where's Travis McGee blog to ponder "Who owns it?"

Mad Kane is a self-described "recovering lawyer," posting satirical verse and political comment.  This week: a versificated sneer at the great State of Colorado, which decrees that even fictional characters who smoke can't smoke indoors. 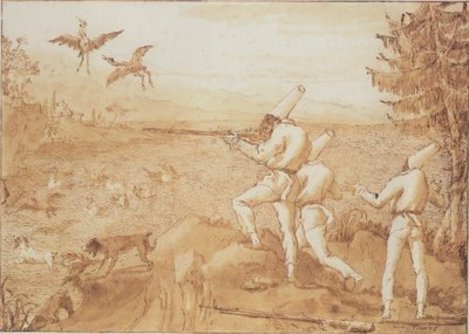 I am sure that Brett Trout of BlawgIT would like you to read his sound and sober proposals for Your Corporate Blogging Policy, but you know and I know that what you really want to see today is Brett's take on the Top Ten Wackiest Patents in the World.

At Prof. Shaun Martin's California Appellate Report, an insurance coverage case involving the surviving members of The Doors and this practical observation:

Even if you're a stud, sometimes you've simply got a case that's wrong on the merits.

Evan Schaeffer does not post as often as he once did at The Legal Underground (emphasizing instead his solid, if less eclectic Illinois Trial Practice Weblog) but this week he compiled links to his classic series: TYPES OF LAWYERS Nos. 1 through 17, inclusive.

On the sleekly redesigned Overlawyered, Walter Olson reports on efforts to enjoin the apocalypse.

Lawyer Advertising redux: "Have you ever done anything stupid?  GET MONEY NOW!" 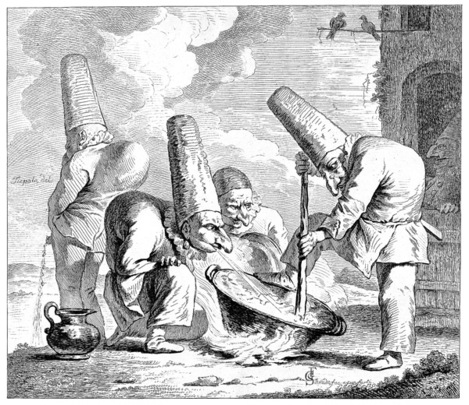 NSFW -- Professor Shaun Martin of California Appellate Report noted an unfortunate milestone: the California Supreme Court's first reported use of a certain well known but particularly nasty 12-letter Oedipal pejorative [but the Justices were just quoting the defendant, so that makes it all all right, right?]

Double-plus NSFW -- Another Donn Zaretsky Art Law Blog pointer, this time to Rita Tushnet's 43(B) Blog and a post on artist Adam Connelly who "paints pictures of pornographic images, pixellated so that it's our minds, not the paint, providing the salacious details."  There's an example, but it won't harm you as long as you stay very close to the computer screen.  Contrariwise . . . .

Legal tabloid Above the Law (which has driven a slew of traffic to our Blarrgh Review, thank you very much) posts an extremely rude story involving deviant wombats and vowel shifts.

New horizons in employee management, too?  I have no response to this: "Whips and chains: not even in your spare time, please."

Of related interest: Amber at Prettier Than Napoleon demonstrates convincingly that lawyers really need a better class of sexual fantasy. 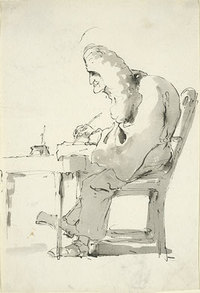 Enough!  I have done, for this year, with this April Fool's extravaganza.  Thank you all for joining in.  Do drop by again sometime soon, eh?

Blawg Review has information about next week's host, and instructions how to get your blawg posts reviewed in upcoming issues.

Wow. Fantastic Job! That has to be the most comprehensive Carnival appendix I have ever seen. Is an appendix eligible for Blawg Review of the Year?

Three cheers for Tiepolo's punchinello drawings! The best drawing is the one that shows them cooking gnocchi. Yum!

This will be BR of Year, unless Ed. rigs it.