It is not to be gainsaid that all is well when, on a holiday weekend Sunday, one's RSS feed is amply supplied with moose.  To wit:

Via 3quarksdaily comes a fine article by Prof. Keith Stewart Thomson in the American Scientist, entitled Jefferson, Buffon and the Moose, detailing the efforts of Thomas Jefferson, in his 1781 Notes on the State of Virginia

, to debunk the notion widely circulated by the great French naturalist the Count de Buffon that the indigenous creatures (and native peoples) of the Americas were in all cases smaller, weaker, pale shadows of their counterparts on the eastern side of the Atlantic.  The majestic Moose was given pride of place among Jefferson's proofs that America was a land well supplied with beasts surpassing those of Old Europe.

Prof. Thomson writes near the end of his article: 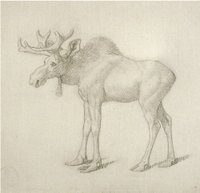 Around the time Notes was published, Jefferson was living in Paris as the new nation's ambassador to France.  When he arrived, Jefferson sent Buffon a copy of Notes and the skin of a large panther, and was subsequently invited to dine with Buffon at the Jardin du Roi, Paris's magnificent botanical garden.  Of that meeting Jefferson later wrote, 'in my conversations with the Count de Buffon . . . I find him absolutely unacquainted with our Elk and our deer.  He has hitherto believed that our deer never had horns more than a foot long.'  So Jefferson decided to show him a full-grown American moose.  He wrote to General John Sullivan, president (governor) of New Hampshire, for help in getting a large specimen, instructing him that the bones of the head and legs should be left in the skin so that it could be mounted in a life-like manner.  Eventually a 'seven-foot tall' moose was collected in Vermont and shipped to Paris.

Many years later, Daniel Webster told the story that Jefferson had had the moose set up in the hall of his apartment and invited Buffon to see it.  Confronted with that stark refutation of his earlier thesis, Buffon was said to have exclaimed, 'I should have consulted you, Monsieur, before I published my book on natural history, and then I should have been sure of my facts.'  It would be nice if this story were true.  In fact, Buffon, by this time old and sick, was away from Paris when the moose arrived in October 1787.  Jefferson sent it to Buffon's long time associate, zoologist Louis-Jean-Marie D'Aubenton, for the great man to see when he returned.  Although most of the hair had fallen off the hide, the antlers sent by Sullivan were from a smaller animal and the whole carcass was probably rancid, Jefferson was 'in hopes that Monsieur de Buffon will be able to have it stuffed, and placed on his legs in the King's Cabinet.'

The sketch accompanying the article is by George Stubbs, the master painter of 18th Century British race horses and of other, wilder animals.  The sketch depicts a bull moose calf owned by the Duke of Richmond.  It appears from the available scholarship that this sketch represents the third moose acquired by the Duke.  Three years earlier, Stubbs produced this painting of The Duke of Richmond's First Moose (1770): 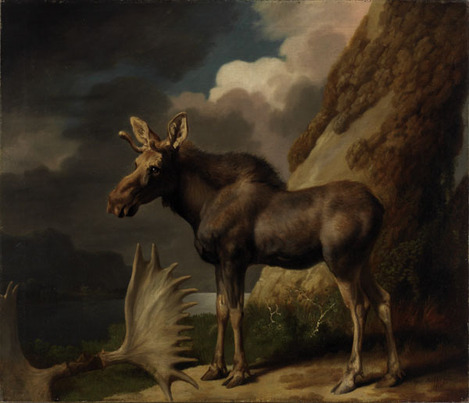 This fine figure of a Moose was in New York this time last year as part of a large Stubbs retrospective at The Frick Collection, whose curators' notes show that British nobility was more in tune with mooseness than its French counterparts:

Eighteenth-century English noblemen imported North American moose to their estates for domestication and breeding. Their experiments failed, but these primitive-looking creatures remained of interest to natural scientists like William Hunter. Hunter studied Richmond’s yearling moose, and having stated, 'Good paintings of animals give much clearer ideas than descriptions,' he commissioned Stubbs to paint an 'exact resemblance' that included a pair of mature antlers.

Hunter intended to lecture at the Royal Society on his radical theory of natural extinction while displaying this work. Stubbs painted from direct observation, successfully completing his task with a scientist’s detached accuracy. Because the native habitat was unknown to him, Stubbs improbably depicted the moose commanding a mountain landscape. However, he did include a pond, as Hunter had recorded that moose ate 'the rank herbage of marshy grounds.'

Elsewhere today, the visual wine reviewers at Chateau Petrogasm offer this as their descriptor for the 2004 Chateau de Beaucastel, Chateauneuf du Pape: 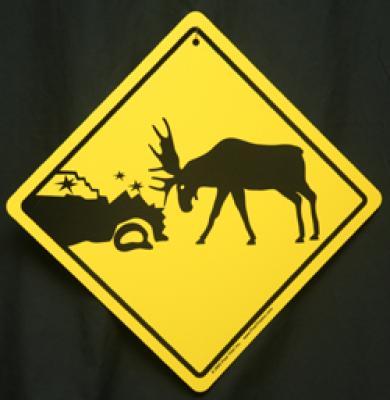 To paraphrase a weary old groaner of a punchline, the lesson here is:

"A stolen Rhone gathers no moose."

Translator's Note: The post title is not a typo.  "Orignal" is French for "Moose."

: More Moose!  To honor the passing of "[o]ne of the great hobos, labor organizers, union men and singer/writer/mentors," Utah Phillips, songs:illinois offers a selection of his work, including a so unsavory it's savory tale of what one can cook up with a pastry shell and some moose, er, leavings: "Moose Turd Pie."  As a bonus, quite a dreadful pun involving rural electrification is included at the outset of that piece.  Recommended for all them's as is not easily offenced.