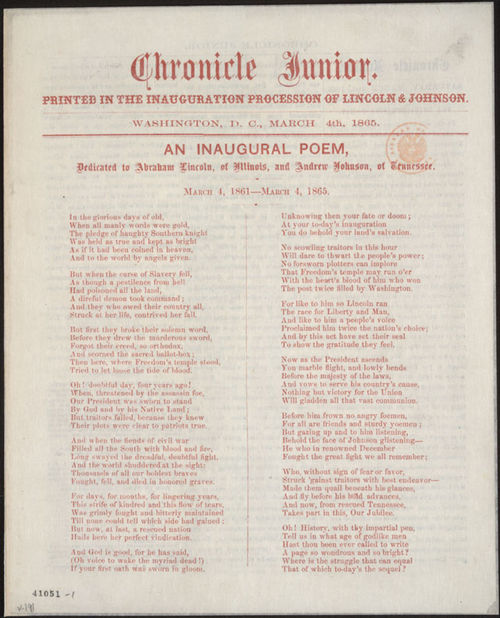 I have been hunting, thus far in vain, for the text of Elizabeth Alexander's inaugural poem, which was I think Very Terrible and which was delivered in that manner poets have --

of pronouncing Each.  Word.  Distinctly, but without.  Affect or.  Understanding

-- that is calculated to drive audiences from the room and away from poetry altogether for generations.  Reverend Joseph Lowery's benediction which followed had more poetry in any random ten second passage than the official Poem mustered in its entire length.

Fortunately for us all, within moments of Ms. Alexander's conclusion, the eminent Dr. Boli posted a superior alternate version of The Inaugural Poem.

The New York Times has a text of the real poem.  This is only a transcription, i.e., not the text.  I strongly suspect that the line breaks in that version are all wrong.

A commenter to this post at Entertainment Weekly attempts a transcription that likely comes closer to the actual lineation.  (See comments by "Doodle"  posted at 1:51 pm and 1:48 pm, EST.)  The EW post itself describes the poem oxymoronically as "a steady march of free verse iambic pentameter" and is all too taken with limp bromides such as "figuring it out at kitchen tables."  It presumably goes without saying that those tables are on Main Street, not Wall Street.  Urgh.

The Times of London is not so easily fooled.

Remarkable the number of visitors dropping by today through some variant on the search "inaugural poem terrible".

At The New Republic, Adam Kirsch critiques the inaugural poem as an example of "bureaucratic verse."  He includes excerpts from earlier Alexander poems that show her to be a poet fond of short lines, which reinforces my assumption that the available transcriptions are getting the line breaks wrong.

In fairness to the poet, and so that readers can judge the work for themselves, here is Elizabeth Alexander's own delivery of her poem earlier today:

At last!  Newsweek offers up the true text of Elizabeth Alexander's "Praise Song for the Day," complete with proper line and stanza breaks, proper punctuation, a proper copyright notice, and the news that a chapbook edition Can Be Yours come February 6.

It fares somewhat better on the page and in the mind's ear than it did in performance in this morning's "sharp sparkle", but it is still not a particularly impressive poem.  I remain unaccountably but genuinely aggravated, for example, by the dangling preposition that concludes the commemoration of the hard-working dead who

built
brick by brick the glittering edifices
they would then keep clean and work inside of.

That lonesome "of" might be set up to rhyme with "love" two stanzas later, but I doubt it.  There are no other rhymes in the poem, after all.  And what, pray tell, is "love with no need to pre-empt grievance"?

Let the last word on this come from the Los Angeles Times' David Ulin:

There is, of course, a cognitive disconnect to reading poetry to an audience numbering in the millions, as Alexander did.  Most poets never reach that many people in a lifetime, which may have something to do with the choice to keep her focus simple, her imagery direct.  Even so, the crowd began dispersing well before she was finished, as if her words were little more than an afterthought.

Partly, that has to do with her placement on the program, after the president; she had the misfortune of following the main event.  But even more, it suggests the tangential role of poetry in our national conversation, which is unlikely to change no matter how seriously this president, or any other, takes the written word.

We now return the new administration to the prosaic business of governance in difficult times.  Good luck to them.

Illustration: Inaugural Poem for Messrs. Lincoln and Johnson, 1865, via the Library of Congress.