Tonight is the night, as Los Angeles Opera launches Achim Freyer's staging of Wagner's Ring with Das Rheingold.  For the occasion, the company has released these video excerpts in to the wild:

I must await the March 1 matinee before seeing for myself, but whatever else may ultimately be said about this production it certainly appears not to be dull.

The Persistent Influence of Mel Brooks

It is a sign of a misspent youth, surely, that this headline (from the Drudge Report) --

-- instantly made me think of this:

Someone should warn the First Lady to keep a watchful eye on the President's moves. 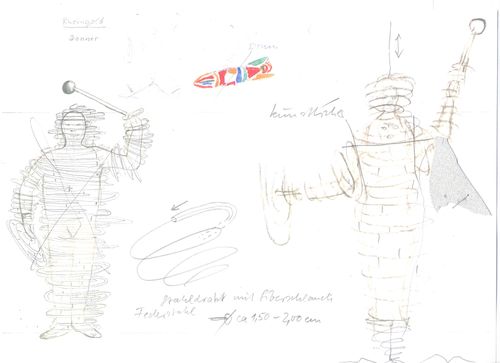 There is little more than a week remaining before Los Angeles Opera launches the first of its new productions of Wagner's Der Ring des Nibelungen under the direction of Achim Freyer.  Photos that have emerged from the design and rehearsal process have borne all the hallmarks of a Freyer production -- large expressionist headmasks in particular -- but have given few hints of how Freyer actually intends to approach the Ring.

In an article in the current issue of Opera News, "Painting with Music," the OC Register's Timothy Mangan provides the most detailed report yet just what the designer-director is up to:

'I am a painter, and this is a profession with the whole man,' [Freyer] says.  'And when I do theater I divide myself.  And this is very interesting, because it’s schizophrenic.  And it’s very different.  But the person’s the same.  And the person learns from theater for painting, and from painting for theater.  But it is nicht Absicht [not on purpose] — it is mein Schicksal [my destiny].'

'I do not want to do what Wagner wants,' he says.  'I want to do a concept to show what Wagner wants. You understand?'  In his conception, he doesn’t intend to provide a visual copy of the music and text.  Wagner’s poetry alone is a masterwork, he says, and the music is yet another masterwork.  Freyer wants to stay out of the way, allow Wagner’s art to speak for itself.  'My conception is not to [duplicate] this.  I do the third [thing].  And the third is the room in which I hold the music and the text and bring it to the public.'

In other words, realism is boring — too literal.  Besides, Freyer says, Wagner isn’t realism: 'Wagner wanted timeless persons.  It is the mythos and not the history.  It is not historical, it is a vision of the beginning and the end of the world.  And this I want to do with figures and with rooms and lighting that you have never seen.  That’s very important.  I think I do music theater in the sense of Wagner but do not use the materials of Wagner from the time 200 years before.  I do it in this time — the revolutionary theater.'

Freyer interprets the characters in the Ring as 'quasi' persons, or split personalities.  They do not exist in a single way.  Some of the costumes, therefore, are mere façades, and the singers can come out from behind them.  'Wotan can come out, and I can show, "I play this person, Wotan, and I am a singer."  The singer can come out from the costume, the illusion is broken, and a new idea is coming: "Ah, that’s the sense of Wotan that comes out and tells us this."  Or Wotan has a shadow, and the shadow does a different thing than Wotan tells.  Or he has a double, a mirror of Wotan, and the mirror remembers the past and goes back.

If Freyer's doubling and distancing puts one in mind of Brecht and his Verfremdungseffekt, it should come as no surprise: Freyer's early years in the theatre in the mid-1950s were spent in Brecht's master class in East Berlin.  Until I see what he has done for myself, I am happy to take Freyer at his word that his konzept is an attempt to show us "what Wagner wants," rather than an imposition of "what Freyer wants."  It all sounds very promising at this point. 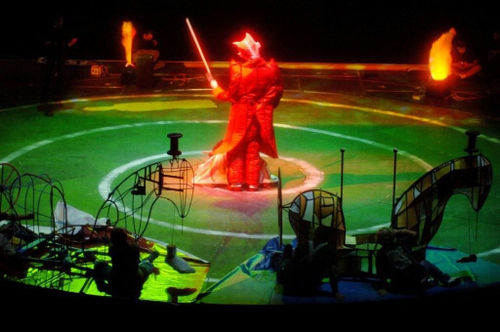 Last November, LA Opera announced that the full stagings of the entire Ring cycle scheduled for 2010 will be accompanied by a countywide Ring Festival of cultural and scholarly events.  Among these, unsurprisingly, will be at least a few panels and symposia looking at the most unpleasant side, not of the Ring itself, but of the Ring's creator.  A creative genius but a frequently repellent human being, Richard Wagner was possessed of a deep-dyed and unapologetic anti-Semitism.  Wagner died before Hitler was born, but the Führer's embrace of Wagner's music is well known, as is the Wagner family's own embrace, both philosophical and literal, of the Führer.  (Alex Ross gives an excellent account of the uses Hitler and the Wagners made of one another in The Rest Is Noise

.  A major theme of that book is the degree to which the best of 20th Century music is essentially unthinkable without the contributions of those -- Jews and homosexuals -- that Hitler most desired to disappear.)

The combination of Wagner, anti-Semitism and the Nazis has been known to fuddle the thinking of even well-intentioned commentators, and the presence of that combination in the Ring Festival promptly generated this letter to the editors of the Los Angeles Times, in which fuddlement (or worse) has plainly gotten the upper hand:

Why politicize 'The Ring'?

Re 'Ring Festival Is Already Packed,' by Diane Haithman, Nov. 4:

I am curious why the Ring Festival has to have a seminar conducted at American Jewish University regarding the use of Wagner by the Nazis, and who pitched it. Are any taxpayer dollars funding this?

Wagner died in 1883, and while he may have held [sic] 'anti-Semitic' views, his work should be allowed to stand alone, and without all the Holocaust political hoopla, as one of the greatest artistic works in European history.

Should we not also censor Jewish-Israeli artistic works and demand seminars on illegal West Bank settlements, violation of Palestinian human rights, and the 'wall'?  When do responsible people leave their politics at the door so the rest of us can view and enjoy a great work of art on its own merits?

I have wanted to see Wagner's 'Der Ring des Nibelungen' for years.  But not now, and not in Los Angeles.  It seems that if some people cannot completely destroy the reputation of the artist, they will attach their unresolved psychosis of hate to the festival and the showing of the work of art itself.

I leave a full accounting of the fuddles and misprisions in this particular missive as an exercise for the reader -- no, not that reader -- and move on with a low moan and a mild shudder.

Lest anyone should be concerned that Achim Freyer is permitting unfortunate Nazi iconography to slip in to his production, I offer this rehearsal photo from next season's Götterdämmerung, in which it appears that the Führer's favorite, the Great German Hero, Siegfried -- surely the most dunderheaded Hero in all opera, but never mind -- is presented as some sort of goat-legginged anime lobsterman: 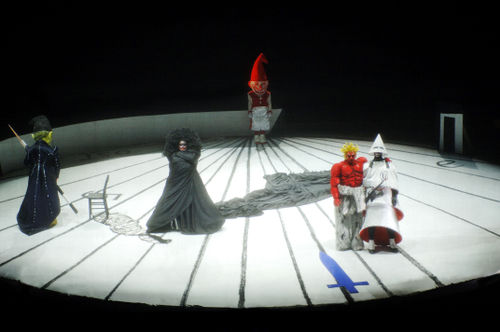 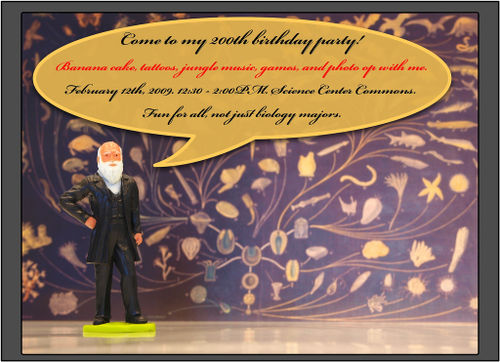 Charles Darwin is 200 years old today, and I believe him even if too few of my fellow citizens do.

Posted at 08:47 AM in Current Affairs, Film, History (Personal and Otherwise) | Permalink | Comments (0)