For the fourth time in as many years, I am hosting an edition of Blawg Review on Declarations & Exclusions.

By the careful application of arithmetic, it has been determined that this week's edition counts as Blawg Review #205.

In keeping with the celestial theme adopted for this edition, the photo above depicts Local Group Galaxy NGC 205.

For a change, instead of talkin' art around here today, I'm talkin' art on my legal blog.

I listened closely during the curtain calls at Sunday's matinee performance of Das Rheingold, and I did not hear any of the booing that has been reported by some other correspondents.  Which is as it should be.

Los Angeles Opera's first venture in to Wagner's Ring is certainly not perfect -- no staging of the Ring ever is -- but for all its eccentricities, it is unquestionably the Real Thing.  Brazenly theatrical and strongly marked by its director's particular stylistic tics, the LAOpera Rheingold nevertheless stays true to the task at hand: telling the story that Wagner actually wrote, letting the work speak for itself and not imposing some external idea of what it means or, in the director's mind, "should" mean.

As has been said again and again, Wagner conceived his enormous Ring des Nibelung not as a mere series of "operas" but as a Gesamtkunstwerk, roughly a total artistic expression of a fundamental mythic story presented through a unity of music, poetry, movement, and the visual arts, each element spectacular not for the sake of spectacle but in the service of the total tale.  Such a thing is ultimately impossible to achieve in practice, but Wagner himself pressed the technology of his time about as far as it could go in his effort to accomplish it.  (Because of the time necessarily involved in moving elaborate scenery and effects about, Wagner was occasionally obliged to write extra music, most famously in Parsifal, to fill what he intended to be seamless transformations between scenes, turning a bug into a feature.)

Achim Freyer, directing the Ring for the first time, imposes himself in matters of style in this production, but not in matters of substance.  It looks like an Achim Freyer production from beginning to end, but Freyer is directing the work that Wagner actually created, not some entirely different work that he wishes Wagner had created.  Because the tale is set in a distant and supernatural world, the unusual appearance of objects and characters makes more sense than it would in a more "realistic" work such as, say, Eugene Onegin.  The gods are gods, the dwarfs are dwarfs, the giants are giants, and magic is magic.  The Tarnhelm -- the magic helmet that allows its wearer invisibility or transformation in to creatures large and small -- looks like a golden top hat here, but it is still a magic helmet.  The Ring itself is easy to follow around the stage, as it is represented by a glowing orb.  Let's take a look, shall we? 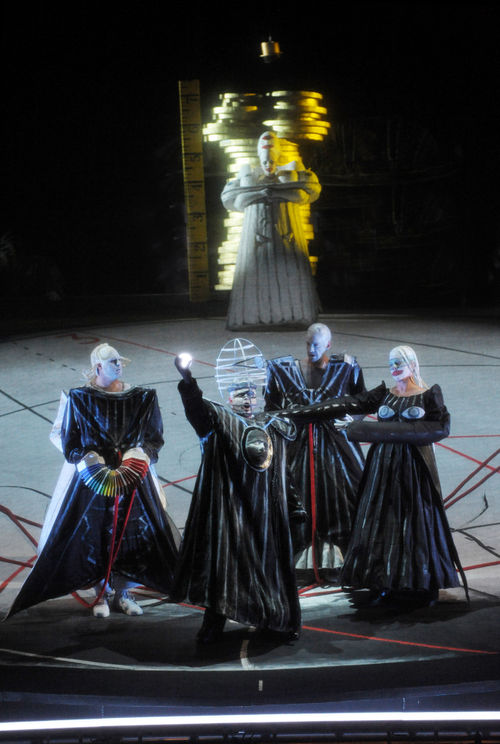 Here we see Wotan, chief among the gods, holding the Ring aloft as he debates with himself whether to take the advice just given him by the earth goddess Erda (not seen here because she has descended, with her many arms, back into the depths of the planet) to rid himself of the (literally) cursed thing.  With him are his wife Fricka, with her perpetually yearning/clinging/pleading arms, and her brother gods, Froh and Donner.  The Tarnhelm floats atop the pile of gold at the rear.  The pile is being measured (hence the large ruler) to see how it stacks up compared to the goddess Freia, who stand before it and will be returned to the other gods by the giants Fasolt and Fafnir if only Wotan will add the Ring to that pile of gold (which he will eventually do).  The giants have taken Freia as collateral for the unpaid construction loan on Wotan's new godly fortress Walhall.  The other gods would like her back, because only Freia supplies the golden apples that keep them all young.  They are dressed in black here, as they have been since they began rapidly aging in Freia's absence.  When Freia is returned to them shortly, it will immediately improve their condition and they and their costumes will become both brighter and, in some cases, larger.   (A photo of Freia after her return, with an appearance by the aforementioned giants, is in the extended portion of this post.)

You may ask, "What is that on Wotan's head, a bishop's mitre or a parrot cage?"  Actually, that is his head, or a framework mask representing his head.  Wotan has only one eye, having sacrificed the other before the opening chords in order to win wisdom and Fricka.  His mask-head also has only one eye, as does the head of the much larger version of Wotan in which the singer is sometimes encased.  Masks and puppetry are a large part of Achim Freyer's stagecraft, much as they were for Julie Taymor in Los Angeles Opera's Grendel.  The gods are portrayed by only one singer each, but there are sometimes multiple representations of each character on stage simultaneously.

In addition to those centuries-old theatrical tools, Freyer uses the most contemporary technology: the entire production is staged behind a scrim, which serves as a screen on which high definition video effects are projected.  Perhaps the most effective use of video comes near the conclusion when the gods walk over their rainbow bridge to Walhall: the rainbow's spectrum is projected on the scrim to create the illusion that the entire stage space has been suffused with mist, tangible light, and color.  Next slide, please. 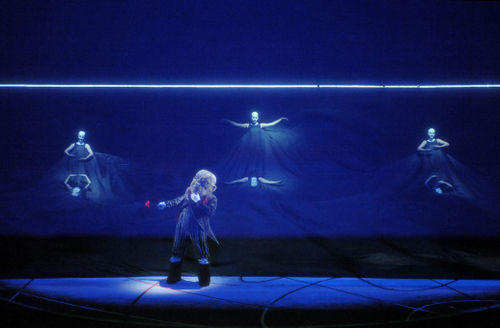 Here, we return to the opening scene, in which the dwarf [Nibelung] Alberich is attempting in vain to win the affections at least one the three Rhinemaidens in the depths of their river.  The watery ambience is a combination of stage lighting and a blue video tinting of the scrim, with the Maidens partially obscured by rippling cloth being shaken by hands in the wings.  The upright Maidens are the three singers performing the parts, with their inverted "reflections" provided by three of the dozen or so dancer-mimes who round out the Company.  Not yet revealed here is the Rhinegold itself, which is represented by very bright handheld lights -- all right, flashlights -- underneath the fabric "river," which allows the gold to move magically about like a phosphorescent school of fish.  Forswearing love in favor of the gold's promise of ultimate power, Alberich clambers beneath the fabric himself and emerges with a large glowing Ring-colored lump, soon to be forged into the large glowing Ring we have already seen.

One more photo, featuring a character not yet discussed: the sly trickster fire god, Loge. 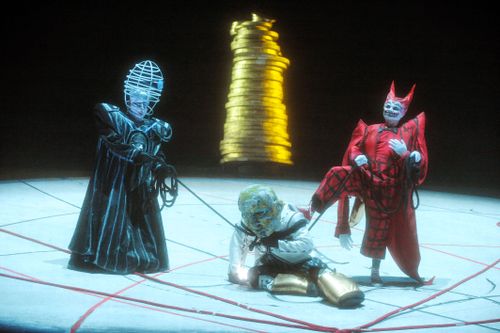 Loge is referred to but never actually appears in the remaining three parts of the Ring, although there is at least one photo from design rehearsals suggesting he will have a non-singing manifestation when the time comes to surround Brunnhilde with magic fire in Die Walkure.  (If so, he will probably recur at the conclusion of Episode 4: Gotterdammerung, when Literally Everything goes up in flames.)

The character is so engagingly written that a well-performed Loge -- which Los Angeles emphatically has in the person of Arnold Bezuyen --  often steals the show in Rheingold.  As designed by Freyer and sung by Bezuyen, Loge is flame, devil and fast-talking lawyer-salesman all in one plaid zoot-suited package.  (Wotan only entered into the Freia-swapping contract with the giants on advice of counsel: Loge assured him there would be a way out of the deal later.)  Loge here has at least four arms and one hand seems always at his breast, because you know you can trust him, eh?

While Bezuyen's Loge received the most enthusiastic applause for any of the singers, the loudest ovation of all was reserved for conductor James Conlon and the orchestra.  (The musicians were hidden beneath the stage throughout and never seen; for the curtain call, a camera panned across the pit and the orchestra was projected on to the scrim to receive the crowd's huzzahs.)  I am not qualified to judge where Conlon and the Los Angeles players fall in the pecking order of properly Wagnerian playing, but I can say that the musical elements of this production were as compelling and effective as one could reasonably ask.  As he demonstrated in last season's remounting of the David Hockney Tristan, Maestro Conlon loves his Wagner, and his desire to do well by the composer shines through.

In summary, then: Freyer's approach to the Ring is by no means literal, but is genuinely honorable in its intention to present Wagner at Freyer's expense and not vice versa.  It is absolutely not boring and no matter how off kilter its surfaces may appear it is no betrayal of the work.  Beyond Bezuyen's terrific Loge, and Graham Clark's splendidly put upon Mime, the singers are entirely sufficient but not stunning.  I suspect that Vitalij Kowaljow's Wotan and Michelle De Young's Fricka will both be more compelling as those characters' complexities play out in Walkure next month and in the complete cycles next year.  The orchestra under James Conlon is better than sufficient and also likely only to get better.  Los Angeles can rightly claim that it has an authentic Ring to it.

A.C. Douglas' Sounds & Fury serves as a one-stop depositary for other's reviews of the L.A. Ring, to which I can add Fine Arts LA's report, which went up at about the same time as my own.

Post title derived in part from Anna Russell's much beloved explanations of the Ring: