An LA Times Story With a Familiar Ring To It 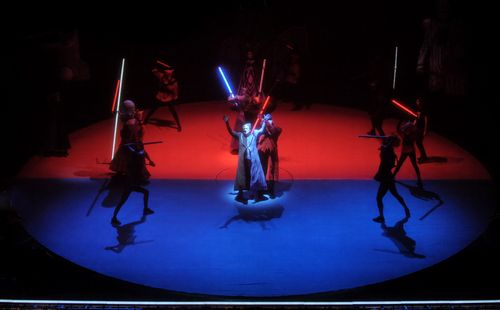 Christopher Smith of the Los Angeles Times went to see Los Angeles Opera's Walküre the other evening, and lays claim to an Important Insight into its director-designer's methods:

I was equally eager to see director Achim Freyer's staging and designs, which have led critics, bloggers and impassioned local Wagnerians to whip themselves up to near-hysteria.

An incomplete list of comparison points for the design of the opera mentioned online include 'Star Wars,' a carnival, 'Wheel of Fortune,' the circus (both the regular and Cirque varieties), puppet shows and 'The Twilight Zone.'

But the opera was less than 10 minutes old when I realized it was I who had discovered the true, secret coda [sic] powering Freyer's vision. A post-performance trip to the Internet confirmed this revelation, which is clear, indisputable and undeniable, and which you can see above [in Smith's post].

If you click through to discover Smith's Revelation, you may wonder along with me whether his "trip to the Internet" might have included this revelatory, if unacknowledged, blog post.

Photo: Placido Domingo, as Siegmund, is stabbed in the back; it runs in the family. Photo by Monika Rittershaus via Los Angeles Opera.

Seems to me YOU WIN!

Smith isn't the only one rising on your coat tails. La Cieca pulled out the same thing agter your original post as well