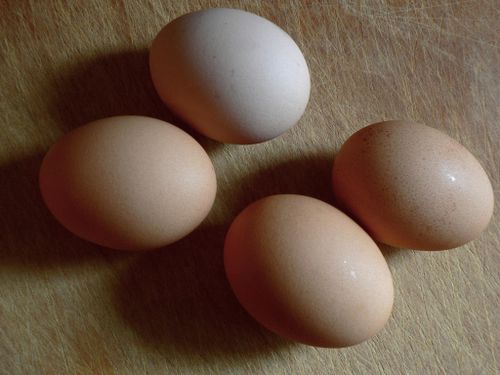 Easter means, inter alia, eggs.  As a reader service, here are some suggestions for preparing eggs in a variety of styles and textures, with and without their shells.

You have heard, perhaps, of Scotch eggs, reputed to have been invented not by Scots but by the wily London merchants at Fortnum & Mason.  A Scotch egg is a hard-boiled egg encased in a layer of pork sausage, breaded, deep fried and eaten cold, calculated to reinforce every unfortunate opinion Dr. Johnson ever uttered concerning the Scots.  But how, you may ask, does one properly hard boil those eggs in the first place?  For that, we must turn further north than Scotland and look into Norwegian eggs or, more accurately, the University of Oslo's "Kunsten å koke et egg" ("The Art of Cooking an Egg") which explains, in Norwegian, how to achieve exemplary results when boiling one's eggs.  If you don't read Norwegian but are able to convert sizes and temperatures to metric terms, the site provides a clever Flash-driven tool, shown below, to determine precisely how long to boil your particular egg to achieve perfection: Whatever you may think of Scotch eggs, there is one anglicized Scot who knows a thing or two about the culinary arts, famously hot-tempered chef-restaurateur Gordon Ramsay.  Here, in his more charming mode, Chef Ramsay demonstrates how to prepare perfect scrambled eggs:

I had rather assumed that he simply glared at them and they scrambled themselves.  Viewers of the US version of Hell's Kitchen can only shudder when Chef Ramsay compares scrambling eggs to making risotto.

The cooking of eggs for a full English breakfast requires the steady and attentive hand of a live chef, and should not be entrusted to unreliable, or mechanized, kitchen staff: