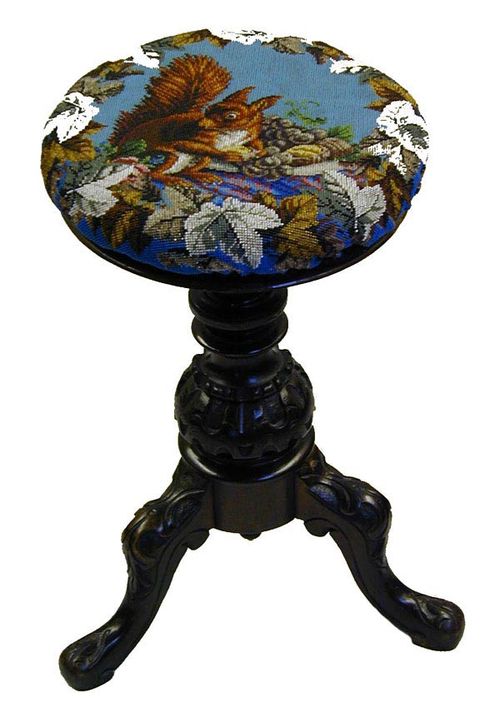 Time once again for the fool in the forest Easter Squirrel, the sixth in our recurring series.  This year, we turn from purely pleasurable paintings of squirrels to the more practical, and pianistic, purposes to which our perky pals can be put.

As decoration for an early Victorian piano stool, par example.  This squirrel-emblazoned stool, of English manufacture circa 1850, is in the collection of the Bowes Museum, located in the market town of Barnard Castle, County Durham, in the northeast of England.

While the beadwork nut gatherer on the seat is clearly a proper English red squirrel, the institution in which this squirrel is housed has a suspicious Francophile quality to it.  The Museum was founded and built by a successful English businessman, John Bowes, with his wife Joséphine.  Mr. Bowes met the future Mrs. Bowes in Paris in 1847, where the lady was an actress, Joséphine Coffin-Chevallier.  They were wed in 1852.  Mrs. Bowes was an amateur painter and lover of the arts, and she persuaded her spouse to embark on a project to bring the benefits of the arts to the presumptively unenlightened folk of County Durham.  To that end, the two traveled and collected widely, and oversaw the design and construction of the Museum building, modeled on the style of a French chateau and claimed to be the first major British building constructed using metric rather than imperial measures.  Sinister, indeed.

The prize of the Bowes collection is a wondrous 18th century automaton, The Silver Swan.  Mark Twain mentions having seen it, at the 1867 International Exposition in Paris, in Chapter XIII of The Innocents Abroad:

I watched a silver swan, which had a living grace about his movements and a living intelligence in his eyes -- watched him swimming about as comfortably and as unconcernedly as if he had been born in a morass instead of a jeweler's shop -- watched him seize a silver fish from under the water and hold up his head and go through all the customary and elaborate motions of swallowing it -- but the moment it disappeared down his throat some tattooed South Sea Islanders approached and I yielded to their attractions.

The Swan is currently undergoing extensive conservation, as well as being studied to better understand its workings and perhaps to figure out exactly who constructed it.  Some glimpses of the Swan in action can be seen in this informative video on the conservation project:

And here is one of the Swan's complete daily performances, shot by a visitor to the Museum over the heads of numerous other visitors to the Museum:

From a squirrel to a swan, and on, and so on: a happy Easter to you all.

For completists, here are links to prior years' Easter Squirrel posts: