Die Walküre, the second installment in Los Angeles Opera's Achim Freyer-directed production of Wagner's Der Ring des Nibelungen, opens tonight, and the company is finally, slowly, releasing a selection of production photos in to the wild. Tim Mangan has samples on the OC Register Arts Blog. I know where more are hiding, but I am selfishly saving them up for later. I will of course report further once I have actually seen it, but for the moment it's time to have a little fun at the expense of one of herrdirektor Freyer's design choices.

This production runs through April 25, to return in May and June 2010, when LA Opera performs the entire Ring cycle. It features, for all but the final two performances of this run -- the last of which, alas, is the one I must wait for -- Placido Domingo in the role of Siegmund. Christopher Ventris takes the role on April 22 and 25. Here is a photo of Domingo's Siegmund, in the company of Linda Watson's Brünnhilde and, lying on the ground, Anja Kampe as Siegmund's twin sister, and lover, Sieglinde: The Sieg-twins -- who will complete a Sieg-trifecta when Sieglinde bears Siegmund's son Siegfried -- are the children of the god Wotan and a mortal mother. Freyer has elected to depict their mixed heritage and divided nature by splitting their appearances in to two sides, one light and one dark. Here is a somewhat clearer view of the pair as the twins celebrate Siegmund's extraction of the glowing blue sword Nothung, previously concealed by Wotan for Siegmund to discover in the tree that grows conveniently in Sieglinde's front parlor:

Certain of my readers will already have figured out where I am going with this. Yes, I am worried about this seemingly happy couple. Theirs is a relationship that cannot end well. It is as plain as the pointy hair on one side of their heads. Siegmund, you see, is white on the left side and dark on the right; Sieglinde is white on the right side and dark on the left, and any follower of vintage, original series Star Trek can tell you that this is a combination that cannot be sustained: 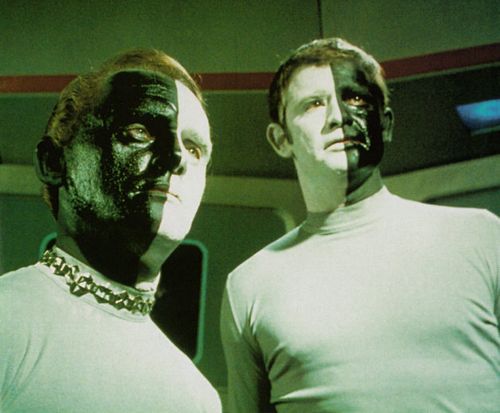 More on Walküre later. April is a triple-opera month for me. Next up: Antonio Vivaldi's Motezuma tomorrow (Long Beach Opera, albeit performing in Santa Monica), with Walter Braunfels' The Birds on April 18 (LAO).