The Mathematic Circus of the Modern Night

First, "Clignotants" ["Blinkers"], shot in and around the brickbound streets of Bordeaux.  Beyond the music, which I am digging quite completely for weeks now, I am particularly fond of the illuminated cadeusis that crops up at 5:39 and that gets its close up right around 7:11 in this clip:

Next, the piece that was my own first discovery of les plaisirs Ghysien.  itsnotyouitsme is the performing combination of NYC composer/ violinist Caleb Burhans and composer/guitarist Grey McMurray, and their debut EP release Walled Gardens

is well worth your while.  This is Florent Ghys' one man version of the highlight of that collection, "we are malleable, even though they seem to own us."  As I have commented at Vimeo, this version may actually excel the excellent original.  Just watching it play out is pure pleasure:

Our American Memorial Day is not a day dedicated to Memory generally, but to the particular memory of those who have died in the armed service of the nation.  To honor the military dead with a piece inspired by a dedicated pacifist is not the most obvious gesture, but pacifism recoils from war precisely because those very dead are the end product of every war, won or lost, just or otherwise.

So, for this Memorial Day, I offer up Arvo Pärt's Cantus in Memoriam Benjamin Britten, here performed by the self-conducted Boston chamber ensemble A Far Cry:

Messing About in Boats
with Death and All His Friends 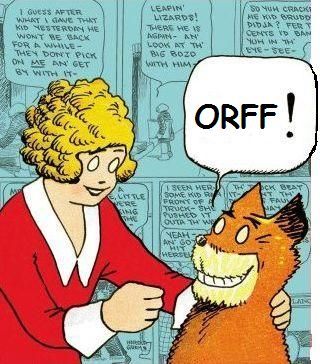 Modern's a still-birth that was born after it died in 1939 --
Or was it '45? --
And we've been attending the longest saddest funeral in history,
Without even knowing.

Last July, I enthused enthusiastically over the announcement of Long Beach Opera's 30th Anniversary season.  On Sunday afternoon, that season came to an end with the performance of a double bill of one-act operas in the former #5 boiler room (now a 3-story atrium/exhibit hall) aboard the Queen Mary.  My high hopes for LBO have by and large been fulfilled -- as I reported previously here and here  -- and this concluding program, while arguably the weakest of the three, was still satisfying in the "interesting work interestingly staged" way one hopes for with Long Beach Opera.

The two works on offer have in common only that each is an opera and that each was written in 1943.  Beyond that, their origins stand as mirror image versions of musical life under the Third Reich.

I. The Emperor of Atlantis

Viktor Ullmann composed The Emperor of Atlantis in the ghetto/ concentration camp at Terezin, or Theresienstadt.  Many of those imprisoned at Terezin came from the vigorous Jewish cultural community in and around Prague, a community in which Ullmann had achieved significant success and in which his librettist, the 25-year old playwright and artist Peter Kien, was a rising star.  The SS administrators permitted a varied and active musical and theatrical life within the camp, but only for the cynical purpose of being able to hold Terezin up to the world (and to Red Cross inspectors) as an exemplar of the "humanity" with which the Reich was treating the transported Jewish populations.  The unsavory truth was never far below the surface.  The original production of Emperor of Atlantis was abruptly banned when SS officers witnessed a dress rehearsal and caught on at last to the work's patently subversive message.  Virtually all of those involved in that production, including Ullmann and Kien, were transferred to Auschwitz in October 1944, where most either died or were killed within days. 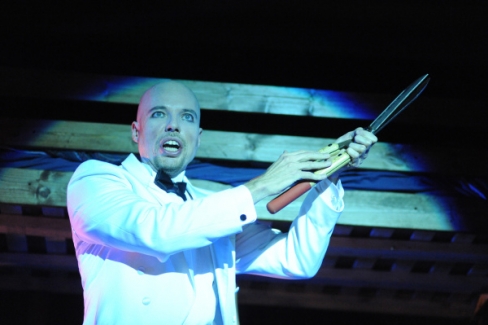 No surprise, then, that Emperor of Atlantis is all about death.  The titular Emperor decrees worldwide, total war -- literally a war of all against all -- and commands every citizen be armed and instructed to go forth and kill whoever he or she may find.  Death himself is so incensed by this that he withdraws from the world, refusing to permit anyone to die.  As he points out, Death is not the cause of suffering and pain, but the one who ends suffering and pain.  (There's no talk of an afterlife in Ullmann's Atlantis.) The situation becomes untenable in the end and the Emperor and Death strike a bargain: Death will return on condition that the Emperor be the first recipient of "the new Death."

The logic behind conductor/director Andreas Mitisek's approach to Atlantis was less than clear.  The performers, in period dress, straggled in with luggage as if for a sea voyage.  The set consisted of two sets of bunks reminiscent either of steerage or of the dormitories of Terezin.  Death was in evening wear, the Drummer in underwear.  There was a good deal of declaiming when characters weren't miming killing themselves or others. Kien and Ullmann's opera is declamatory in much the same way as Brecht & Weill's collaborations, and the work itself ultimately carried the day.  The cast drew mainly on Long Beach veterans from this and earlier seasons. Standouts included Peabody Southwell as the Drummer and Dean Elzinga (Hagen in the LBO micro-Ring) as an earnest and irritable Death.  Ms. Southwell, a fine singer and a gifted singing actor, is my nominee for Long Beach Opera MVP this year, having appeared impressively in all three of the season's productions.  I hope we will be seeing and hearing her again soon.

II. The Clever One

The Nazi regime's relations with Carl ["Carmina Rosanna Buranadana"] Orff were as cordial as its dealings with Ullmann were hostile.  Although never apparently an active member of the party, Orff accepted its praise and support, much as Richard Strauss did.  Orff was far less concerned with ideology than he was with advancing the career, reputation and well being of Carl Orff.  (Alex Ross provides a good thumbnail sketch of the Strauss-Orff problem in the larger context of the war and the Holocaust here.) 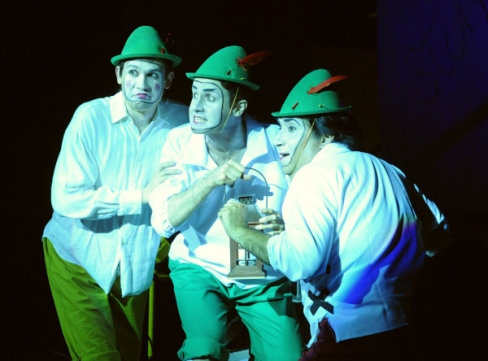 Orff's The Clever One shows no signs of having been composed in the middle of a world war.  It is a bumptious and delightful folk tale from Grimm, in which a clever king is out-clevered by a peasant's daughter not once, but twice.  Rogues and vagabonds scheme to defraud one another, characters are tossed in and out of jail, but justice and true love ultimately prevail.  The insistent rhythms for which Orff is so well known abound, and the jokes are genuinely funny.  If Philip Glass had a sense of humor in his music, he would likely produce something resembling The Clever One.  (Which raises the larger question: why is there so little contemporary comic opera?  It's all gloom, doom and Engagement with the Burning Issues of the Day all the time.  Britten could do comedy, but what major composer has done it successfully since, or shown interest in even trying?  And no, The Fly doesn't count.  There's a difference between comic opera and a bad joke.)

Long Beach Opera's perpetual budget constraints became a virtue in The Clever One, with a set consisting mostly of three large rolls of white paper suspended above the stage.  Drawn on, written upon, cut open to make doors and windows, used for shadow projections, they provided all that was needed in the way of scenery.

The cast brought infectious enthusiasm and a lyric zaniness to the proceedings.  Particularly welcome was the return of LBO veteran Suzan Hanson as the titular Clever Woman, bringing wit and a welcome grace to the smartest character in the room.  Roberto Gomez, who has made a specialty of royalty this season as Montezuma in April and as Ullmann's Emperor on this occasion, charmed as the slightly vain King, clever but not quite so clever as he had thought.  Undeservedly obscure -- Andreas Mitisek reported prior to the performance that it has been mounted previously in Los Angeles only once, by a visiting company from San Francisco in 1956 -- The Clever One provided a properly happy ending to one of the most satisfying Long Beach Opera seasons yet.  I am already itching with anticipation for whatever the company announces for its next season.

In 2005, the BBC produced a documentary musical memorial to the victims of the Holocaust, filmed at the sites of the horrors.  The program included this segment, filmed at Auschwitz, in which Gerald Finley -- currently most associated with the eponymous role of J. Robert Oppenheimer in John Adams' Doctor Atomic -- sings the Emperor's final aria, submitting himself as first recipient of the return of Death to the world, leading to the final chorale, set to a repurposed version of Luther's Ein' feste Burg ist unser Gott.

Long Beach Opera photos by Keith Ian Polakoff, via the OC Register.  "Carmina Burannie" cobbled together by the blogger.