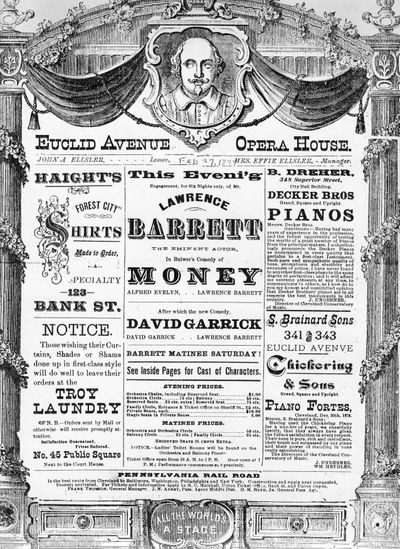 The Cereal List is a new, NYC-based blog, rather insider-y (i.e., there are plenty of references to New Amsterdam Records thus far), and dedicated to the proposition that

in the form of juicy, salacious, occasionally outright fictitious gossip.  The current banner atop the site is also a treat: a splendidly insouciant double portrait of Philip Glass and Leonard Cohen.

The Cereal List takes its name not only in acknowledgment of those pesky Serialists with whose lingering tradition any serious classicist must deal in one way or another, but also in tribute to the video artifact below, an advertisement of which I had not been reminded for a very long time. This is perhaps the finest use of opera in a commercial, ever.  It is also a priceless memento of the lost Golden Age of Mother-In-Law jokes.  Oh, the pathos of it all!

Researching further, I discovered that this was not the only operatic Rice Krispies spot.  Apparently, it is but one of three created in 1969 by the Mad Men (Chicagoans, actually) at the Leo Burnett agency.  Of the other two, I have found only one online, and I can't say as I can recall ever having seen it before.  It is remarkable for achieving what Belasco and Puccini could not: a happy ending to Madama Butterfly.

The right utensil conquers all, even when love alone cannot.

The sweet power of music is not to be gainsaid.  Indeed, it has been shown again and again that opera, in the hands of the right ad man, can reconcile almost any difference:

"It Goes Without Saying" 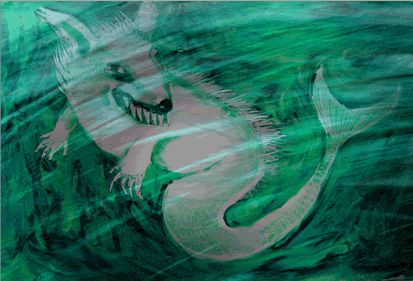 The title of yesterday's post ["It Went Without Saying"] reminds me that I have been meaning for the longest time to post the video below.

Animated by Iceland's Una Lorenzen using hair, window spray, and paper cut-outs -- Have I ever mentioned my childhood pet hermit crab?  No? It's probably for the best -- the film accompanies an edited version of "It Goes Without Saying" by composer, arranger, blogger, and international cultural whirlwind Nico Muhly.  The full piece is about twice as long as this excerpt and appears on Muhly's first release, from 2006, Speaks Volumes

The version of this video previously available on YouTube is filled with irritating digital artifacts, but this more recent upload to Vimeo has avoided that pitfall.  A much cleaner and clearer Quicktime version can be downloaded via the Bedroom Community label site.

The creature at the top of this post comes from Ms. Lorenzen's video for "Evolution of Waters," a song from Bedroom Community mastermind Valgeir Sigurðsson's very fine Ekvílibríum

, featuring a typically otherworldly vocal turn by Bonnie "Prince" Billy (whose own The Letting Go

, for all you seamless-web discerners, was produced by Sigurðsson and features highly effective string arrangements by Muhly).  As I quite like that video, it too will be posted here for your natatorial pleasure:

It Went Without Saying 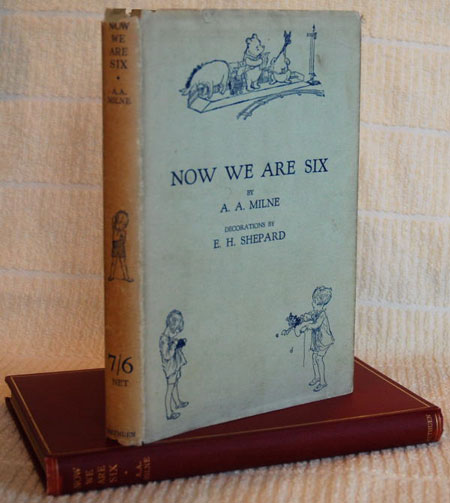 Somehow, it slipped my mind and escaped my notice and slid by all unbeknownst that this weblog reached its Sixth Anniversary some six weeks ago, on July 2, 2009.

Looking back over old posts to confirm the correct date and the proper age to report here, I rediscovered that I was already punning on our 44th President nearly five years ago, when he was but a very junior Senator-elect.  Google evidence suggests I was the first to come up with that particular pun, for what it's worth.

You can tell that that post is an old one because two out of three of the hyperlinks in it are dead, a Web-based memento mori of sorts:

We are such stuff
As dreams are made on, and our little life
Is rounded with a 404 Not Found error.

I may be a lover, but I ain't no dancer.  Leastwise, I am no dancer when it comes to formalized/organized movement any more complex than a box step, and even that has been known to test my limits from time to time.  Other members of my household are happily not so terpsichoreally challenged as I.  The best I can claim for myself is that in the non-formalized, wriggle and jiggle school of dancing, I can hold my own with St. Vitus -- "rapid, irregular, and aimless involuntary movements of the arms and legs, trunk, and facial muscles".  And even I can manage quite well as a spectator of other people dancing.

Which brings us to Fox's So You Think You Can Dance , Season 5 of which ended just last week.  My lady wife began watching the show enthusiastically a couple of years ago and ultimately turned me into a fan as well.  Ordinarily, it is not the sort of thing I would mention here, but this season's final round of competition included an unexpected dollop of one of my favorite things: Minimalism!

Below, the final two women in the competition, Kayla Radomski (blond) and eventual champion Jeanine Mason (not blond), perform a piece choreographed by Emmy winner Mia Michaels set to an excerpt from the fourth and final section of The Four Sections

, a 1987 composition by minimalist eminence and 2009 Pulitzer winner Steve Reich:


A higher quality, non-embeddable version of this performance is (currently) viewable here.

I have to say that neither of these very fine dancers shows at her respective best in this number -- the synchronization seems a bit off and there is some obvious non-cooperation by Jeanine's costume at the conclusion -- but it was nonetheless nifty to hear a Seriously Serious Composer such as Reich being used in a context in which pop 'n' hip-hop (or Carmina Burana) are far more common.

.  His website features a free MP3 recording of a longish excerpt from the world premiere performance in 1976.  (Click on the "multimedia" link to reach it.)

Continuing the "minimalism in unexpected places" theme, Reich's influence is inescapable in the arrangement of "Island, IS," a track prereleased this week from the forthcoming album by Bon Iver side project Volcano Choir. Plink plink plink, pulse pulse pulse, repeat.

Illustration: from the score of Steve Reich's seminal Piano Phase (1967), via ESTWeb.  Last year at this time, I highlighted a tour de force performance of that same work.

The Archangel loved heights.  Standing on the summit of the tower that crowned his church, wings upspread, sword uplifted, the devil crawling beneath, and the cock, symbol of eternal vigilance, perched on his mailed foot, Saint Michael held a place of his own in heaven and on earth which seems, in the eleventh century, to leave hardly room for the Virgin of the Crypt at Chartres, still less for the Beau Christ of the thirteenth century at Amiens.  The Archangel stands for Church and State, and both militant.  He is the conqueror of Satan, the mightiest of all created spirits, the nearest to God.  His place was where the danger was greatest; therefore you find him here.  For the same reason he was, while the pagan danger lasted, the patron saint of France.  So the Normans, when they were converted to Christianity, put themselves under his powerful protection.  So he stood for centuries on his Mount in Peril of the Sea, watching across the tremor of the immense ocean,-immensi tremor oceani,-as Louis XI, inspired for once to poetry, inscribed on the collar of the Order of Saint Michael which he created.  So soldiers, nobles, and monarchs went on pilgrimage to his shrine; so the common people followed, and still follow, like ourselves. 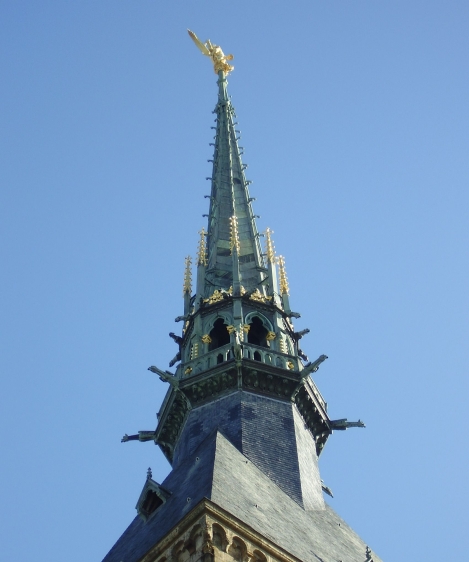 Henry Adams' way with a paragraph leaves me cowering in my unworthiness.  Nonetheless, I take him as patron, and the Archangel Michael as symbol, for this edition of The Angels' Share, my recurring collection of Web tidbits drawn largely from my Google Reader "share" page. 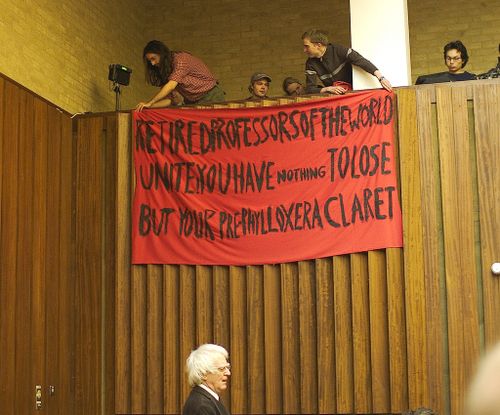 The upper photo, of the Archangel atop the spire of Mont-St.-Michel, comes to us via Wikimedia Commons.

This vintage postcard image is drawn from the collection of the Czech artist Tavik Frantisek Šimon (1877-1942): 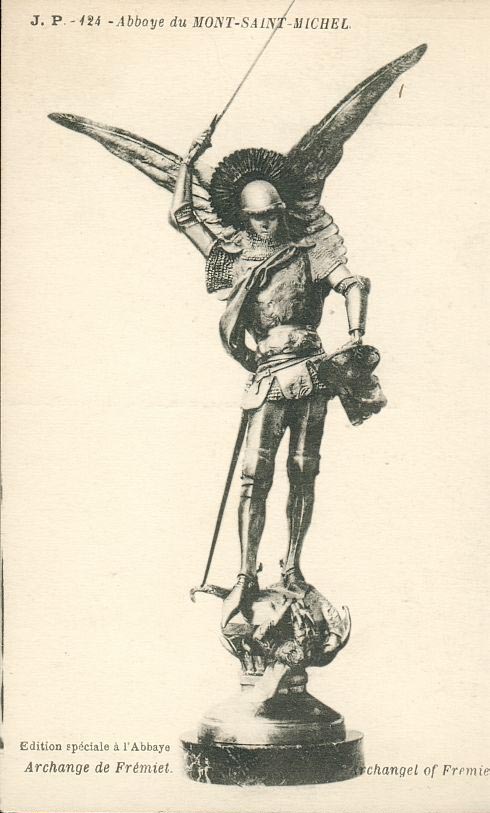 And two interesting views of the Archangel undergoing refurbishment can be seen at the site of The Coubertin Foundation.