"Books Invite All: They Constrain None" 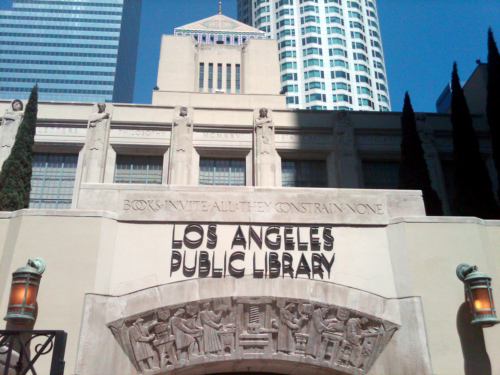 I did a fair deal of walking about between courtrooms and meetings in downtown Los Angeles yesterday.  On my way from the vicinity of 7th and Figueroa to the Federal Courthouse, my path brought me to the lower rear entrance of the Main Library, where I snapped this photo.  My main target was the inscription above the door.  Here is a closer view: 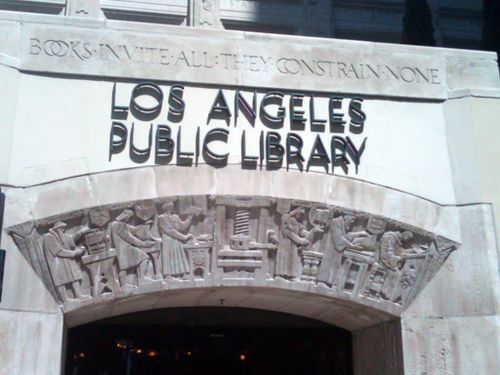 A cursory search suggests that this is not a quotation from elsewhere, but original with whoever was responsible for selecting the language to be inscribed on the Library building.  (An attractive poster is available, featuring a watercolor of the building rather than the physical inscription itself.)

It is a fine sounding sentiment but it is not entirely true, is it?

We can grant to a book an overarching authority, as when we declare that it is not truly or merely the work of our fellow mortals but instead originates from some higher source, a source of such power and infallibility that its dictates as contained in the book must be adhered to at all times.  We can declare the book to be, in effect, the literal last word on any subject.  Those who willingly submit themselves to the book's authority may feel themselves freed, even empowered, by their submission.  When the willingly submissive conclude that the ultimate authority of the book obliges others to submit as well, constraint or worse necessarily follows.

Literalist fundamentalism of any stripe turns our Library inscription on its head.  The linked instances above both involve Islam, but examples can equally well be found in any other rigorously Book-based belief system. Religion holds no monopoly here: the Terror of the French Revolution can arguably  be traced to overzealous, but strictly secular, interpretation of Rousseau and the cruelties of "godless Communism" have been built on careful exegesis of Marx or Mao.  Used in this fashion a book may invite us in, but only to bind us firmly to the less than comfy chair.

Photos of Los Angeles Public Library by the author.