Tamerlano:
You're Bajazet, Bajazet All the Way 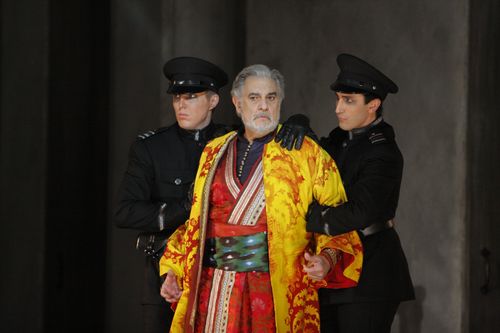 As USC and UCLA had at one another in the Coliseum on Saturday afternoon, a different sort of rivalry played itself out in front of a full house in the Dorothy Chandler Pavilion in Los Angeles Opera's mounting of Handel's Tamerlano.  The central battle of wills in this case is between the conqueror Tamerlane (or Tamburlaine or Timur Lenk or Timur the Lame or what have you) and the conquered emperor of the Turks, Bajazet (or Bayazid or what have you).

Historically, Tamerlane defeated and captured Bajazet at the Battle of Ankara in 1402, and their post-conquest confrontations have supplied plenty of grist to the dramatic mill.  Christopher Marlowe, for example, has the triumphant Tamburlaine keep Bajazet in a cage, rolling him out for the entertainment of guests.  Bajazet takes it poorly, cursing his enemy at every opportunity.  Tamburlaine's seemingly unstoppable accumulation of additions to his empire eventually drives Bajazet to such fits of rage and despair that he literally knocks his own brains out on the bars of his cage.

Before Handel took it up, Vivaldi composed an opera on the subject, and both Vivaldi's and Handel's plots, in proper Italian opera fashion, turn on an elaborate love triangle in which Tamerlane, already planning marriage to Irene, Princess of Trebizond, decides he would rather marry Bajazet's daughter Asteria, who is in love with the Greek prince Andronico, who is allied with Tamerlane and tasked by him with persuading Asteria to the marriage.  Bajazet hovers miserably throughout, raging in his defeat and horrified that his daughter might be conjoined with his archenemy.  It ends badly for him. 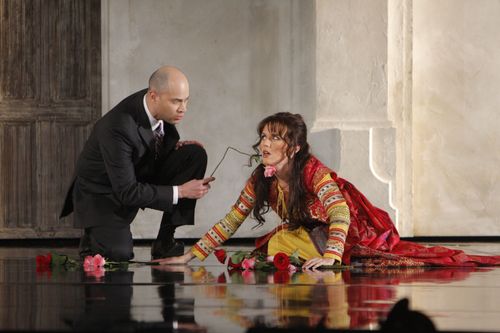 The role of Bajazet in Handel's opera is considered one of the first important dramatic tenor roles, and the rationale for the current production is Placido Domingo's decision to add the part to his repertoire. (The pre-performance lecturer claimed this bring Domingo's total role count to 126, though I am not sure whether that includes his recent first foray in to the baritone realm as Verdi's Simon Boccanegra.)  On the musical side, we can be pleased that Domingo has been indulged: Tamerlano turns out to be a very good bit of Baroque opera and in Los Angeles it was very well played (under the direction of William Lacey) and very well sung.

I have not seen all that much of Domingo, and most of that has been his runs at Wagner: Parsifal and, most recently, Siegmund in Die Walküre.  He remains a compelling figure on stage, and a rather better actor in this part than in some others.  In his hands, Bajazet's Act 3 suicide -- after which Tamerlano takes the last minute or so of the opera to decide that he has changed his mind and everyone else gets to live -- is a terrifically effective scene.  The other roles in this production are in good hands, particularly Patricia Bardon in the trouser role of Andronico and Jennifer Holloway in the too-small part of Irene. 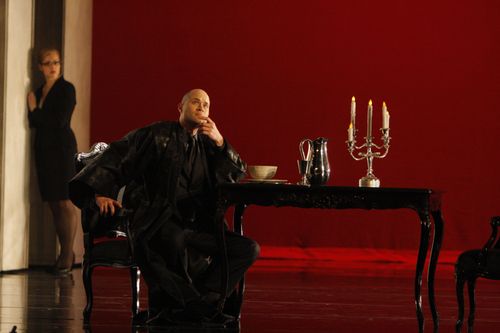 The production itself is a bit dunderheaded.  As the photos show, most of the cast is in modern dress, and the action takes place in a generic police-state atmosphere.  Ho hum, how very contemporary.  Only Bajazet sports princely raiment, and in context it makes him appear to be just another crazy old man wandering about the Presidential Palace in his favorite bathrobe.

The role of Tamerlano suffers most in context.  Written for a castrato, and here sung splendidly by countertenor Bejun Mehta, Tamerlano already has to overcome the oddity, to contemporary ears, of a powerful male character sounding like a mezzo soprano.  Mehta is further hampered by being asked to portray Tamerlano as a sort of decadently flighty-flippant sociopath.  He ends up, through no fault of his own, as a sort of Bond villain on helium, or Dr. Evil with perfect pitch.

This year's other local Baroque-in-modern-dress production -- Long Beach Opera's run at Vivaldi's Motezuma -- was wildly ridiculous, but it had the courage of its wild ridiculousness and, to my mind, succeeded overall because of that choice.  Tamerlano is almost as wildly ridiculous, in fits and starts, but intends at all times to be taken seriously.  It succeeds despite itself, on the strength of the performances on stage and in the pit, but for pure enjoyment Motezuma gets the nod from me.

One last performance of Tamerlano remains, on Tuesday, December 1.

Incidentally, by way of meaningless coincidence: the last street I lived on in West Bloomfield, Michigan, before my family moved to California in the mid-1970's was . . . Tamerlane Drive.

Hale, Merry, and Full of Thanks

Oh my goodness, America, and the World: it's another Thanksgiving Day!

And here in the Forest that means two things: Presidential turkey pardons and Fairport Convention.  (Various exemplars of this recurrent annual rut in which I am enrutted are linked here.)

Yesterday, President Obama took his first run at the annual tradition of Pardoning the Turkey.  Notwithstanding the pleas of PETA and The Atlantic, the President again dispatched the lucky birds to Disneyland. Those who are keeping score can add this rather trivial instance to their burgeoning Obama is just like Bush indices.

The photos of this year's Pardon are disappointing on the whole.  Mostly they resemble this one, in which we see the President demonstrating the turkey levitation skills he acquired under Master Yoda's tutelage on Dagobah.  (The President holds a genuine Dagobahamiawaiianesian birth certificate, you know, with oak leaf cluster.  Ask anyone!)

Feast.  Or feast not.  There is no try.  Futile, resistance is. 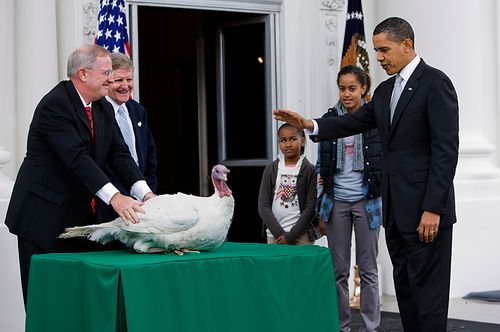 This President is obviously new at this ritual, as evidenced by his staff Trying Much Too Hard.  In the "preview" video below, we see the power of the vaunted White House media operation to take a slim joke (at best) and to drive it without mercy into the ground, such that no actual humor remains.   What else does one expect from Government work?

All right, that's done.  Now, on to Fairport Convention.

I have repeatedly taken Thanksgiving as the excuse to link one or another version of "Now Be Thankful," which is simply a lovely song. Below, the band in performance ca. 1970, with helicopters.  Yes, I know I posted this already back in 2006.  Do I repeat myself?  Very well, I repeat myself.  It's what Americans do!  Especially bloggers.

If all that's too British for you, I'll round things out with a Properly and Inescapably American Song of Thanks.

The Veteran in a New Field 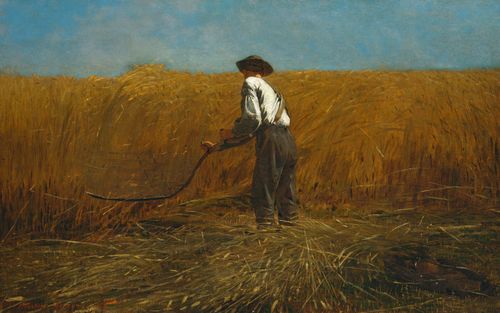 May all Soldiers someday be Veterans.

On our weekend gallivant into the wine country of Paso Robles, my fellow boondogglers and I paid a call to L'Aventure, where Stephan Asseo produces some of the very finest wines now emerging from California. (Oh, if only they weren't priced in proportion to their quality . . . .)

The winery/tasting room building now sports a mural by French artist Erwin Dazelle, in the graffiti-influenced street art style so beloved of contemporary sophisticates such as C-Monster (whose many photos of such things can be seen here). 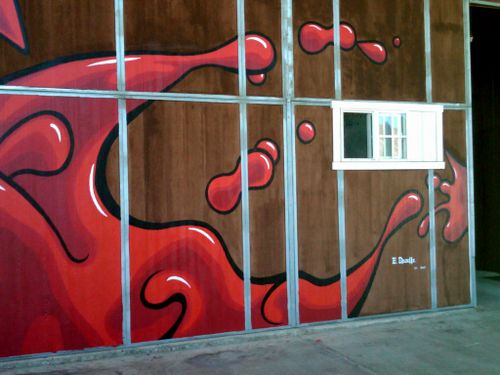 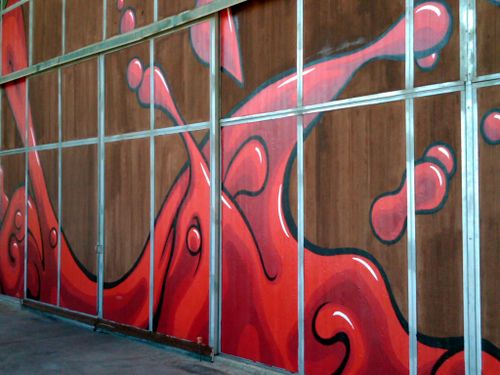 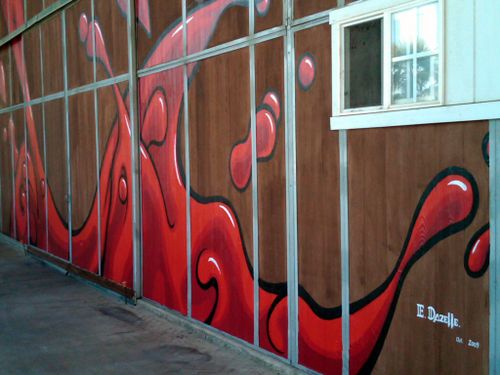 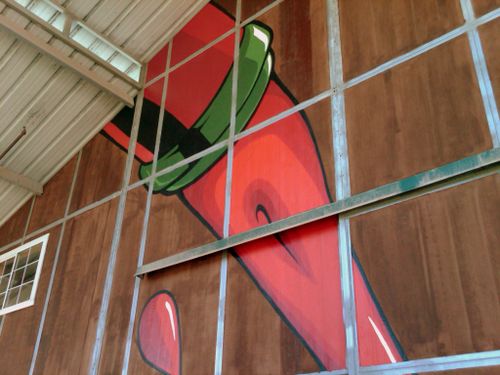 Posted at 10:27 AM in Architecture, Art and Museums, Food and Drink | Permalink | Comments (0)