Home Archives Profile Subscribe
Drive-In Saturday:
Eat, Crow!
The President Appeals to the Bass
(and to the French)

Schweik While the Irony's Hot 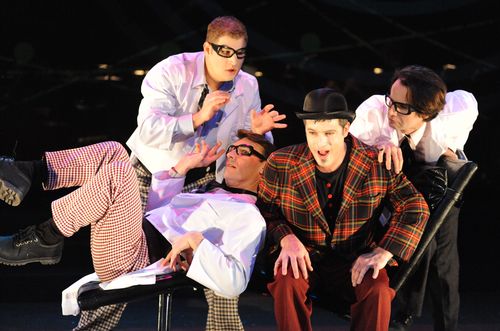 The cold equations of arts finance dictate that even a large, comparatively well-funded opera company can only mount any given production for a small number of performances.  "Engagement extended by popular demand" is not a sign commonly seen around the opera house.

Long Beach Opera is not one of those large, well-funded companies.  In consequence, LBO's new production of Robert Kurka's The Good Soldier Schweik runs for only two performances -- and you've already missed the first one unless you were in Long Beach last night.  It would be a mistake to miss the second.

Schweik is based on Jaroslav Hašek's 1923 novel

, chronicling the adventures of the titular Josef Schweik (Švejk in the original Czech) during the First World War.  As the novel begins, Schweik lives in Prague and makes a living selling dogs with forged pedigrees.  We learn he previously served in the Army, but was discharged as "feeble minded."  On page 1, he hears of the assassination of Archduke Franz Ferdinand in Sarajevo. He spends the remaining 700+ pages of the unfinished novel -- Hašek died of tuberculosis in 1923 with only four of the intended six volumes completed -- getting to the front, with innumerable side trips to jails, mental institutions, field hospitals, fashionable homes, taverns, trains, and so on.

Havoc follows in Schweik's wake.  Whether through innocence, idiocy, or inertia, Schweik tends to do as he's told in a zealously literal sense, with absurd and embarrassing results.  He is some unholy combination of Chaplin, Mr. Bean, Chance the gardener, Candide and Sancho Panza, albeit without the self-knowledge of any of those characters.  Figures of power and authority tend to be the most discomfited by Schweik, and the novel is generally accepted as the first great 20th Century antiwar satire, and an acknowledged influence on later authors such as Heller, Vonnegut and Pynchon.

Schweik is also one of those characters who are as much associated with an illustrator as with their author.  Josef Lada's illustrations are as definitive of Schweik, and as well known in Europe, as John Tenniel's of Alice. 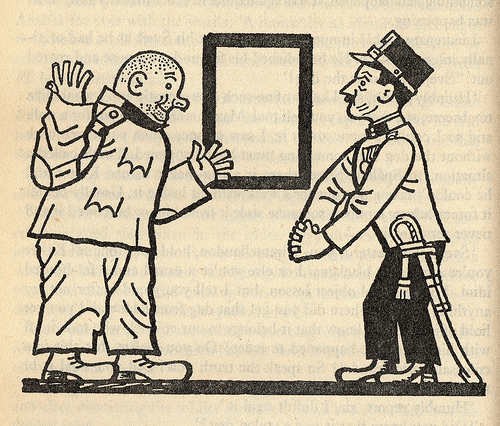 Robert Kurka, a Czech American who presumably absorbed Schweik with his mother's milk, wrote his opera in the mid-1950's.  The libretto is credited to Lewis Allen (born Abel Meeropol), whose other claims to fame include having written "Strange Fruit" for Billie Holiday and becoming the adoptive father of the children of Julius and Ethel Rosenberg following their execution for espionage.  His Man of the Left credentials are in good order.  The text tends to trade in rough hewn colloquial couplets, of the sort favored by Brecht.

Like the novel, the opera was not quite complete when Kurka died of leukemia, at age 35, just before its scheduled 1958 premier with New York City Opera.  A complete piano score existed, mostly orchestrated, but the final orchestration had to be reconstructed for the premier from Kurka's detailed notes.  The orchestra is strictly winds, brass and percussion, with no strings.  The score is clearly influenced by Weill and Stravinsky and possibly Bernstein, among others, with strains of jazz, blues, Czech folk music and more thrown in as needed.  It is dissonant and contemporary, but without abandoning melodicism, and while you may not be able to remember any "tunes" as you leave the theater, it works quite effectively moment by moment. 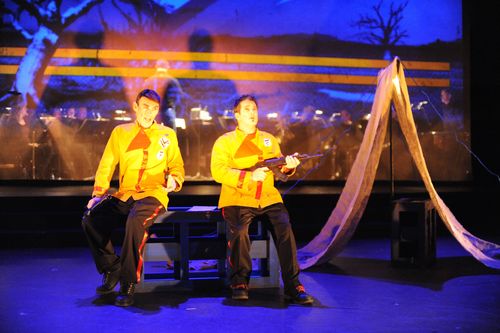 The Los Angeles Times' preview of Long Beach Opera's production suggested a circus atmosphere, but that's not quite right.  Genial agitprop cabaret is more like it.  Singers and ensemble act, dance, move scenery, and generally do whatever it takes to keep the performance moving along through a rapid fire two and a half hours.  The plot is episodic and sudden shifts in tone are the rule.  While farce is the dominant mode genuine danger is never entirely absent, as when we are reminded early on that the Hapsburgs' secret police were no joke or when Schweik and company encounter the maimed, starving soldiers returning from the front.

The Long Beach cast is uniformly committed, energetic, and engaging, with all but Matthew DeBattista (as Schweik) filling multiple roles, sometimes within the space of a single scene.  DeBattista does not resemble Lada's Schweik -- he is more of a three way combination of Chaplin with Laurel and Hardy -- but he strikes all the right notes with the character, which is to say he takes everything in stride with equanimity -- whether deranged psychiatrists, doctors whose cure for everything is three enemas daily, irate generals, or his superiors' inconvenient mistresses -- and that it is impossible to tell whether Schweik is or is not conscious of all the trouble he causes for those around him.  DeBattista is new to Long Beach Opera, and a welcome addition to the company's tradition of savvy singing actors.  (This is Long Beach: we do not "park and bark" here.)

Also new to LBO is Welsh baritone Jeremy Huw Williams,whose roles include the philandering Lieutenant Lukasch, who wins Schweik as his orderly.  From a priest.  In a crooked card game.  Williams brings a long-suffering dignity to the lieutenant, whose circumstances grow worse each time Schweik approaches with another "Beg to report, sir . . . ."

Several standout performers from prior seasons return, including LBO fixture Suzan Hanson (as Schweik's landlady, Lukasch's needy mistress, a nasty nurse and more), Jesse Merlin (a crazed Freudian, an even nastier nurse, and more), Benito Galindo (sundry victimized persons), Alex Richardson (another crazed Freudian, a priest of doubtful probity, and more), and Peabody Southwell (victimized persons, female division, and a Madeline Kahnesque turn as Baroness von Botzenheim, who shows that she Supports Our Troops by bringing her front to the front to hug them goodbye). 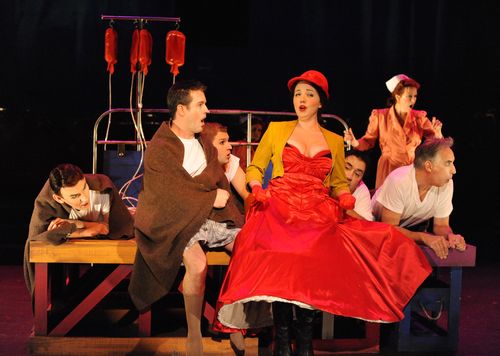 Because his book was unfinished, there's no knowing what fate Hašek had in store for Schweik in the end.  Kurka and Allen elect to have him simply wander off, putting his gun gently down and going left on patrol when his companion goes right.  It is, in its way, the only willful act Schweik commits in the entire opera, and it leads to a final swell in the orchestra that promises a nice, satisfying major chord resolution but delivers a dissonant squawk.  It is a right choice, true to Schweik and his world.  The real satisfaction sets in immediately after, with the realization that Long Beach Opera has again done that thing it does: finding an interesting work that seems to interest no one else and mounting, against the odds, a smart and appealing production.  It may not be grand opera, but it's pretty darned fine opera.

One performance remains: Saturday, January 30 at 4:00 p.m. in Barnum Hall, Santa Monica.  Tickets here.  Did I mention you should go?