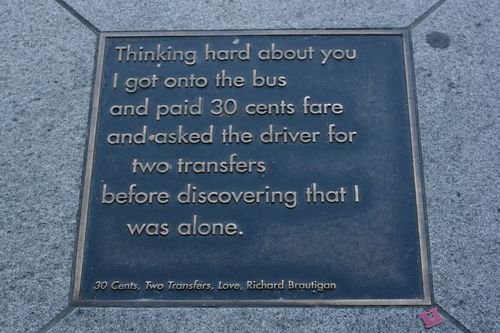 Yashar Saremi
points out that yesterday would have been the 75th birthday of Richard Brautigan, poet and novelist likely still best known as the author of Trout Fishing in America

Here, via the remarkably comprehensive Richard Brautigan Bibliography and Archive site, is a recording of Brautigan reading a chapter from TFiA, "The Hunchback Trout":

The water sound in the background is reportedly a stereo recording by Brautigan of the particular Montana trout stream that inspired that chapter.

Here, a very short film by Huckleberry Delsignore, built on Brautigan's reading of his poem, "Gee, You're So Beautiful It's Starting to Rain" from The Pill versus the Springhill Mine Disaster:

And here, Heather Kahn of the Rhode Island School of Design, with a little help from Django Reinhardt, provides a Gilliamesque animated Richard Brautigan reciting his "Xerox Candy Bar":