I never said all actors are cattle.  What I said was all actors should be treated like cattle. 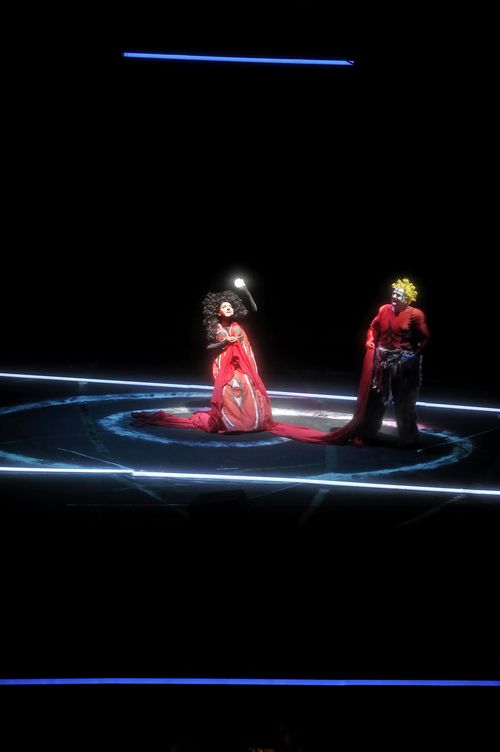 If you want respect, give them Art.  If you want to make the front page, give 'em gossip.

This morning's Los Angeles Times Page One features this juicy piece in which two of the principal singers in Los Angeles Opera's new Ring cycle give vent to their displeasure:

'I'm not going to pull any punches here, and I want to tell it like it is. This entire production has been a trying and difficult time,' Treleaven said. 'The character development that I bring to the part is almost expunged by this clown-like makeup,' he said, adding that he has sustained two minor injuries on the angled stage.

Watson called the set 'the most dangerous stage I've been on in my entire career.…Your whole neck is tipped wrong. It's very painful to do it for hours.'

The soprano said that at one point, she became so frustrated with the production's lack of character development that she told Freyer to 'buy one of my CDs and put it on instead of me.'

And it just goes on from there.

Not to downplay either the challenges that are undeniably posed by the physical requirements of Achim Freyer's production or the priority that should be given to performers' safety in any production, but Ms. Watson's and Mr. Treleaven's real complaint here seems ultimately to be: "This production is not sufficiently about me."

They're right: it isn't.  It isn't really about Achim Freyer or his directorial "vision" either.  To Freyer's credit his production is, for all its eccentricities, very much about the Ring as Wagner wrote it.  The layering of symbols, the expressionist/expressionless masks, the outré costuming, the doubling and tripling of characters, all of it serves as an elaborate mechanism for "getting at what Wagner was getting at."  Figuring it all out is a challenge for the audience, but the necessary effort and attention pays off and, paradoxically, out from all the clutter emerges a remarkable clarity.

Nor is this a production that has no place for "character development," if by that we mean what is usually meant by the term, rather than using it as a synonym for artistic self-regard.  A number of other performers -- who may have their own complaints, but who have had the tact not to spill them to the press -- have turned in performances of both musical and dramatic subtlety.  Vitalij Kowaljow's Wotan is one prominent instance, but perhaps the best example is that of Eric Halfvarson, the only principal singer to appear in all four dramas of the cycle (two Fafners, a Hunding, and a terrific Hagan).

I have no idea what Achim Freyer really thinks about actors and singers, but the Hitchcock quote above is a relevant one.  Just as the best Hitchcock films are perfect clockwork mechanisms in which the actors are just another bit of the escapement, Freyer's Ring is a contraption in which every element, whether musical, scenic, or human, is coordinated toward the end goal.  This is a gesamtkunstwerk we are talking about after all.

Out West Arts has some similar thoughts on the Times article.

And while we're on the subject of contraptions, take a look at this preview of Robert Lepage's upcoming new production of the Ring for the Metropolitan Opera.  If you thought Freyer's raked stage was challenging, just wait until it gets cross-pollinated with a Tilt-a-Whirl:

UPDATE [051510]:  A.C Douglas comments at Sounds & Fury.  I have a final look back at Freyer's Ring in general, and his Gotterdammerung in particular, in the works, which will likely further address some of ACD's points of interest.