Bialystock and Bloomsday
(Nighttown is the Right Town) 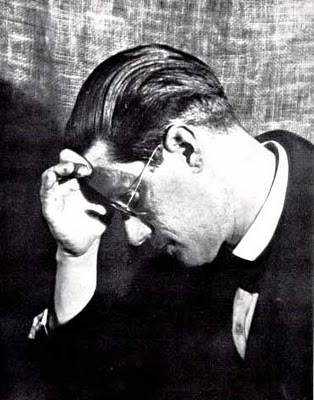 Bloomsday is again upon us, honoring that real-yet-fictive day, June 16, 1904, on which Mister Leopold Bloom and Mister Stephen Dedalus made their joint and several legendary peregrinations round and about Dublin, its vicinity and its vicissitudes, all as memorialized by Mister James Joyce in his non-iPad-compliant misterwork, Ulysses

Bloomsday is now sufficiently well established that it comes with its own Full Colour Brochure.  Many maps and walking tours are attendant to the occasion. 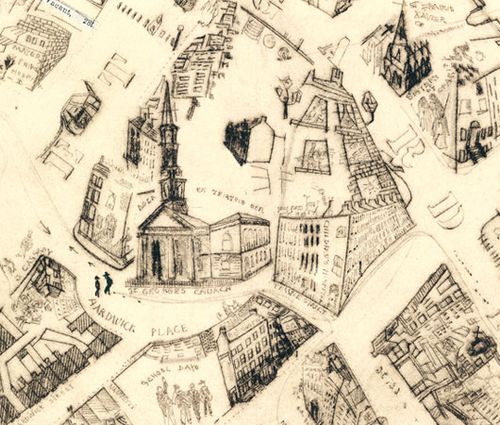 The above illustration is a detail from "Eccles Street," a part of In Medias Res by artist David Lilburn, "a suite of seven intaglio drypoint prints which together form a map of a large part of Dublin and its environs which include the areas of the city that feature prominently in Ulysses."  The area covered by this particular print includes Nighttown, "reputedly the largest red-light district in the British Empire and the location for Bella Cohan’s brothel in the ‘Circe’ episode [Episode 15 in Ulysses], in the south east."

Circe, you will recall, is the sorceress encountered by Odysseus/Ulysses and his men on the island of Aeaea (pronounced "eye-yi-yi").  By the exercise of feminine wiles and magical powers she transforms Odysseus's men in to beasts, a fate Odysseus himself escapes thanks to a combination of awesome manliness and a timely warning from the god Hermes.  (Given that she was a daughter of the son, the Aeaean sorceress's full name was likely "Circe du Soleil".)

Joyce's Circuitous sequence is presented in the form of a drama, with dialogue and stage directions, in which Bloom enters the red-light district seeking to follow Dedalus.  Bloom experiences a series of encounters and hallucinations, from which he eventually emerges to find Dedalus involved on the wrong end of a fistfight.  Surrealism abounds throughout the segment, with abundant sexual imagery and imaginings, as is only to be expected in a chapter largely set in a brothel.

As Joyce had already cast the incident in dramatic terms, it is hardly surprising that an enterprising playwright would adapt the episode as a standalone work for the stage.  It is here we find the hitherto unsuspected connection between Joyce's Dublin and the Great White Way.  Let us consult the New York Public Library Literature Companion, in which at page 523 we learn:

In 1958, Marjorie Barkentin’s Ulysses in Nighttown, an adaptation of the book’s “Nighttown” sequence, ran for six months off-Broadway.  Under Burgess Meredith’s direction, the cast included Zero Mostel as Leopold Bloom as well as Carroll O’Connor, Beatrice Arthur, Anne Meara, and John Astin.  A Broadway revival in 1974, again starring Mostel and directed by Meredith, was less successful.

Fans of Mel Brooks and of Joyce may have wondered if it was mere coincidence that the mousy accountant in the film The Producers (1968) is named Leo Bloom.  Brooks’s 2001 Broadway musical adaptation of his film makes the reference explicit: according to the show’s program, the second scene (in which Leo first meets Max Bialystock) is set on June 16, the day on which the action of Joyce’s novel takes place, known as Bloomsday (Leo even asks [while wondering if he’ll ever get a shot at big time showbiz], ‘When is it gonna be Bloomsday?’).

That 1958 production of Ulysses in Nighttown had some serious theatrical bona fides, I must say: a great generation of actors was working nightly in New York during that era, and this show contained a particular concentration of them.  Below, a pair of stills from that original production, via Wired New York.  In the upper photo, Bea Arthur and Zero Mostel, ten years prior to his immortal turn as the aforementioned Max Bialystock.  In the lower photo, Carroll O'Connor, Anne Meara (Jerry Ben Stiller's mom, kids!), and Lucille Patton. 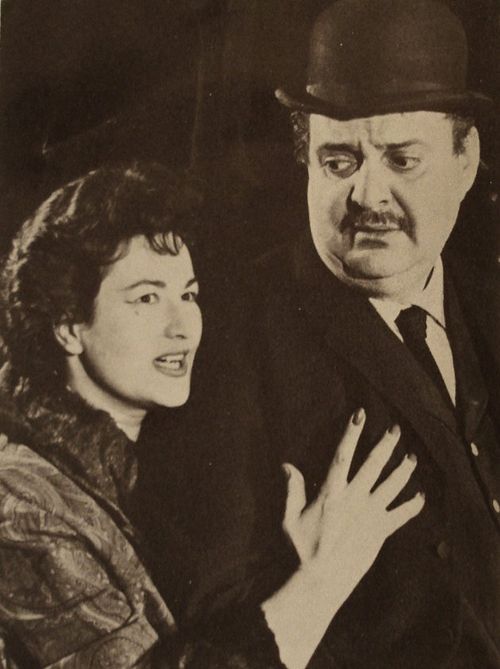 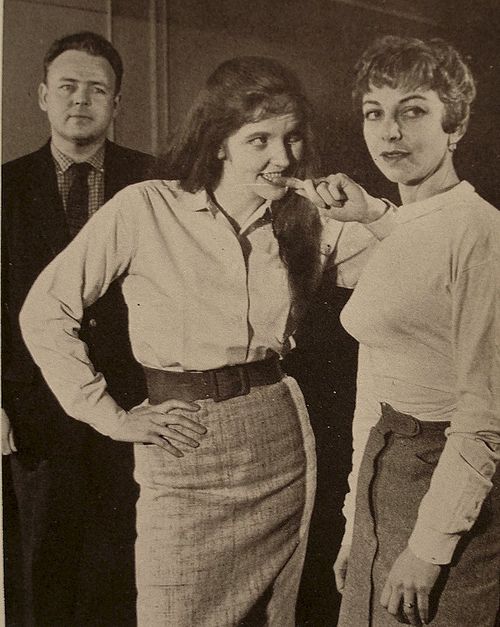 And so, a happy Bloomsday to all.

As you file toward the exits -- in to the Sensual World, as it were -- we conclude our tour of Nighttown with a relevant musical interlude from my favorite Irish rock band, Horslips, which claims to conceal about its person the traditional jig, "Bill Harte's Favourite."

Incidental Intelligence: I've not been able to turn up a full cast list for the 1958 Ulysses in Nighttown, to determine who played whom.  However, I have discovered that the 1974 revival featured Tommy Lee Jones, of all people, as Stephen Dedalus (with a pre-M*A*S*H, pre-Disney David Ogden Stiers as Buck Mulligan, which sounds about right to me).  After the 1958 production of U in N, Bea Arthur next worked with Zero Mostel in 1964 as the original Yente the Matchmaker opposite his original Tevye in the original Broadway premiere production of Fiddler on the [original] Roof.  Sounds crazy, no?