Poem: The Walrus and the Petrol Man

THE WALRUS AND THE PETROL MAN

[being a loose adaptation, for our time,
of "The Walrus and the Carpenter" by the Rev. C. L. Dodgson,
to whom all honor be given and to whom no offense is meant

The sun shone down upon the sheen,
He shone his shining light
On twinkling petrochemicals,
Their spectra sparkling bright,
And this seems odd, because that oil
Was really black as night.

The moon declined to show her face
Though stars were overhead,
Deterred by toxic fumes that rose
And bubbled from the bed,
Or wafted from the surface where
Dispersants had been spread.

The Gulf’s green waters rolled ashore
On bayou, beach and bay,
And brought along the weeds and waste
They’d picked up on the way,
As well as dead and dying things,
Destruction and decay. 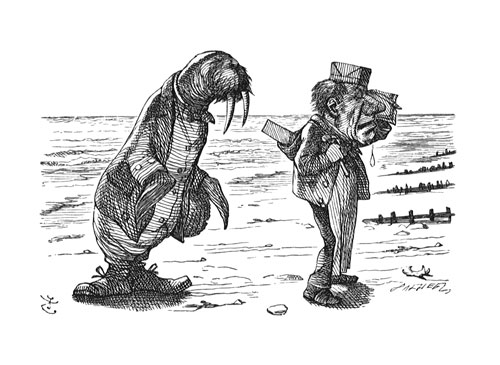 The Walrus and the Petrol Man
Had just stepped from the bar
And started strolling down the beach,
Consid’ring from afar
Just what it was that might be done
To clear the place of tar.

“If seven maids with seven mops
Swept it for half a year,
Do you suppose” the Walrus said,
“That they could get it clear?”
“I doubt it,” said the Petrol Man,
And shed a bitter tear.

“I’d like to have our lives back, sir,”
The Petrol Man complained.
"These locals are small people, sir,”
The Walrus he explained,
“Perhaps, if we consulted them,
Their wrath might be contained?

“A Town Hall meeting’s just the thing.
That’s sure to gain their trust.
It works for politicians, sir,
It ought to work for us.”
The Petrol Man, with furrowed brow,
Said, “All right, if we must.”

“Come Oysters, get up from your beds,
Come Mussels from your shoals,”
The Walrus said invitingly,
“And as the water rolls,
The Petrol Man and I will share
Our worst case cleanup goals.”

The local creatures gathered round
To hear what they might hear.
The Oysters clustered near the front,
Their faces tense with fear.
The Walrus stood. He cleared his throat.
His words were calm and clear:

“The time has come,” the Walrus said,
“A remedy’s at hand:
It’s booms, and berms, and sieves, and scoops,
And whopping bags of sand,
And sponges, and detergents
Of a cheap generic brand.”

“Now hold it there,” the Oysters cried,
“That hardly seems an answer!
What of our jobs? And habitat?
And tourism? And cancer?”
The Petrol Man just shook his head:
“There’s much more to the plan, sir:

“Some golf balls and some shredded tires
Is what we chiefly need!
Some robots! Shears and diamond saws!
A nonstop online feed!”
“With these things, yes,” the Walrus said,
“We can’t help but succeed!”

“We’ve chatted up the President,
And several admirals, too,”
Said Petrol Man, “and they’re convinced
There’s nothing else to do.”
“But what of compensation?” cried
The Oysters, turning blue.

The Petrol Man looked heavenward
And stood in uffish thought,
Then sighed and said, “O Oysters,
Has our caucus been for naught?
Is money all you think about?
You say you can be bought?”

“I hear your doubts,” the Walrus said,
“They cut me to the quick!
You think I’m talking for my health?
You think this is some trick?”
By now the rising tide of goo
Was many inches thick.

"I weep for you," the Walrus said:
"I deeply sympathize.
But accidents will happen, eh?
That’s not a big surprise.
You need us more than we need you:
To cross us isn’t wise.”

The Petrol Man said, “There you are:
We’ve made our plans succinct.
What say you, friends?” He mopped his brow,
And wiped a tear and blinked.
But answer came there none because
Them critters were extinct.

In the ongoing investigation of the BP Deep Horizon oil spill in the Gulf of Mexico, it came to light that the company's environmental response plan included sections dealing with the preservation of walruses.  How walruses came to be included when they are not native to the Gulf of Mexico is something of a mystery.  Perhaps BP staff simply cut-and-pasted a section from an Arctic response plan, or perhaps as fans of Lost they knew that a subtropical climate is no obstacle to surprise encounters with denizens of the Frozen North.

Among the many living things threatened by the spill, oysters and oystermen have figured prominently.

Walruses, oysters, tragedy along the strand . . . I could only think of "The Walrus and the Carpenter" from Through the Looking-Glass, and so set to crafting a contemporary revision of that poem.

I have kept the stanza and rhyme scheme intact, and something of the overall structure of the original -- the prologue in the heavens, the calling of the oysters, the set speeches, the descent in to silence.  Several lines, and nearly the entire fifth stanza, have been imported unchanged. Discrete references to current events and to other poems have been included, though I could not fit in any "mermaids singing each to each."

My method of composition was to create a document with the original poem, stanza by stanza, in one column and my revision in the other.  If you've nothing better to do, you can see the "comparative text" version here [PDF].