Drive-In Saturday: Ernst Enough For Us

I made my first visit to the Art Institute of Chicago on a blazingly humid July day some twenty-plus years ago. The Institute is possessed of an admirably effective air conditioning system.  It is also possessed of one of the finest collections on the planet, and few stretches of time have had such an impact on my own mental life as have the four or five hours I spent inside the Institute that day.

It was a case of one grand discovery after another: known images seen in proper size and context for the first time (Seurat, the room full of Monet haystacks, the parade of 20th century greats), fresh/new appreciations of entire periods (mmmm, more Medieval altar pieces please), and unexpected new discoveries (Joseph Cornell boxes!  Rossetti's Beata Beatrix!).

Somewhere in the middle of it all, not the high point of the day but nonetheless memorable, I had my first extended run in with the collages of Max Ernst. 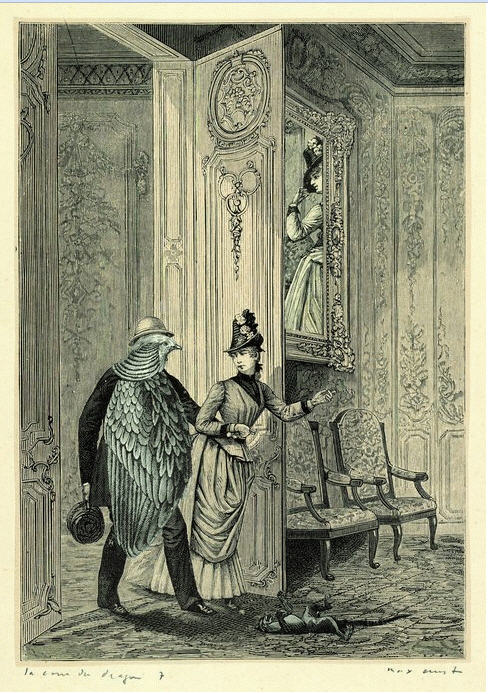 Ernst was more or less Present at the Creation of the Dada and Surrealist movements.  In the 1920s and 1930s, he began creating surreal collages from bits and pieces of illustrations from 19th century novels and encyclopedias.  (A before and after illustration of Ernst's process can be found in this essay from the Musee D'Orsay.)  The results were collected and reproduced in a series of novels-in-pictures, culminating in Une Semaine De Bonte (A Week of Kindness)

This video collects the Semaine collages in sequence, accompanied by the appropriately fantastical music of Krzysztof Penderecki.

Ernst's collages have been enormously influential, combining as they do the staid appearance of Victoriana with the trappings of dream and hysteria.  Donald Barthelme combined Ernstian illustration with his typically gnomic text in a number of stories.  (Scroll down in this article for a pair of exemplars.)  The entire Steampunk genre owes Ernst an unacknowledged debt.  What Ernst did with razors and glue, anyone can (and seemingly everyone does) now do with Photoshop.

Below are two recent music videos in which the aura of the Semaine is on full display.  The first, for "Flush" by Loser, is animated by Tom Werber and draws on illustrations not by Ernst, but by Ernst emulator Dan Hillier.  The song's not all that, but the video comes with ample quantities of tentacles and guest appearances by a heavily armed Queen Victoria and Prince Albert, which adds a certain Terry Gilliam quality to the proceedings:

More purely Ernstian is our next offering, a video by Stefan Nadelman for "I Say Fever" by Ramona Falls.  (Ramona Falls is a project of Brent Knopf of the band Menomena.  Previously, I embedded Ramona Falls's other video, "Russia," here.)

"I Say Fever" transports the Ernst aura from the mean streets of Paris to the American frontier.  The requisite sexual hysteria, lopping of heads, and displays of hidden animal natures have all made the long journey with no loss of potency.

Apropos of nothing: Is it just me, or is that Richard Wagner lounging at left below?  Whoever it is, I predict that it does not end well for him or for his saloon companions.