This is the first weekend of the annual Pageant of the Masters in Laguna Beach, California.  First staged in 1933, the Pageant is an institution unique, I think, to Southern California: a nighttime spectacle in which performers stand very very still pretending to be more or less Famous Works of Art.  The official Pageant trailer gives some idea of the elaborate, volunteer-driven process:

As with the Tournament of Roses parade to its north in Pasadena, the Pageant of the Masters adopts a new theme each year.  I am annually disappointed when the Tournament of Roses selects another of its resolutely upbeat themes.  Must we always begin the year with "Joyful Childhood," or "Candy-Coated Memories," or "Entertainment is Nifty"? Just once, of a New Year's morning, I would like to see a flower-bedecked flotilla depicting something a bit more bracing: "Man's Fate", perhaps, or "Guilt and Revenge."

With the full range of World Art History to draw upon, the Pageant of the Masters can at least glance in the general direction of the Dark and Somewhat Difficult from time to time.  As seen in the trailer above, the Pageant has incorporated Modern and Contemporary art, including Picasso's Demoiselles D'Avignon.  Still, the Pageant like the Tournament tends to accentuate the positive in selecting its themes.  This year's theme is "Eat, Drink and Be Merry," and the nearest the selected works get to the dark side of those pursuits is in a sequence of three images drawn from the Great Depression and the public art projects of the WPA.

In the Pageant of the Masters each work of art is translated from its original medium -- paint, marble, fabric, gold -- into that most curious genre, the tableau vivant, the "living picture" in which the inert are replaced by the vivid doing their best to appear to be inert.  Let us pause now to think some random thoughts about les tableaux vivants. 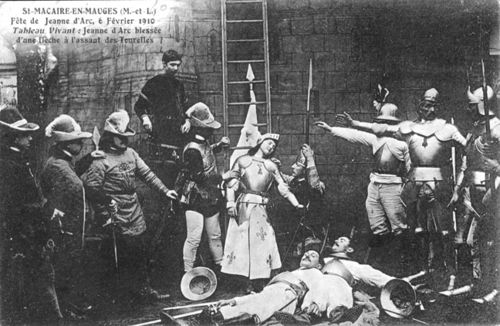 As with Magritte's pipe-that-isn't, this is merely a picture of a tableau vivant.  An actual tableau vivant requires actual people pretending not to be such, depicting scenes that are not actually occurring before you -- or occurring at all, since they are standing still.  A film or photo of such a tableau is at least two moves removed from reality.  Writing about or describing tableaux vivants in words takes us even further away, wandering the forest of signs or, at the very least, lost in the metaphysical weeds.  Cf., on tableaux in literature, the blog entry linked in the photo credit at the end of this post.

If a tableau vivant involves people pretending to be arts and crafts, I suppose the opposite would be arts and crafts pretending to be, or becoming, people.  The sculpture Galatea -- of whom the painting by Jean-Léon Gérôme is currently on display at the Getty -- is a famous example, as is Pinocchio.  Medusa, in the Heroic Age of Greece, turned her beholders into tableaux, albeit not precisely vivants.  It's complicated once you start pondering the variations.

Regardless of theme, the Pageant of the Masters always ends with an enactment of the Last Supper of Leonardo da Vinci.  The one exception to the rule, apparently, was a year themed around the work of Salvador Dali, in which Dali's version of the Supper provided the final tableau.

While Leonardo's Supper is presented in Laguna Beach with all due reverence for the work and its subject, it has also been favored by certain film directors as a target or vehicle for more satirical or subversive tableaux.  Luis Buñuel infamously restaged it with beggars and thieves in the climax of Viridiana, earning himself official Vatican condemnation as a blasphemer.  Only slightly less well known: Robert Altman incorporated the image in to M*A*S*H, during the farewell meal prior to the intended suicide of the company dentist, Capt. Walter "Painless" Waldowski.  That scene also features the film's theme song, Johnny Mandel's "Suicide is Painless."  Perhaps because of his associations with blasphemy, suicide and particularly tableaux vivants, Painless is one of the few principal characters in the film who did not later appear in the long-running television version of M*A*S*H.

In the music video below -- "70 Million" by Hold Your Horses! -- the Last Supper is the jumping off point for a witty series of PotM-style tableaux of famous paintings:

Now I will confess it: in the more than three decades I have lived in Southern California, I have never attended the Pageant of the Masters and I do not expect that I ever will.  My principal excuse for bringing up the Pageant at all was as a roundabout way to drop some non sequiturs on tableaux vivants, and as an excuse to share that video, which tickles me more than somewhat.

Photo (top): "La Séduction Intéressée", one of six tableaux vivants created by Antonin Artaud to illustrate incidents in The Monk

by Matthew Lewis.  Via A Journey Round My Skull.

Photo (lower): A tableau depicting Jeanne d'Arc, found on the blog At the Lighthouse accompanying quite an interesting post on "The Tableau Vivant in Literature".