As with so many other good things, I have come late to the writings of H. L. Mencken.  I have long known of him by reputation, of course, and have often relished his acid-drenched remarks when quoted by others.  I have been known to refer to the "booboisie", or to quote/misquote Mencken's definition of Puritanism, but I had not ever read him in any depth.

I am remedying that omission now, reading through the Library of America's new 2-volume edition of  Prejudices: The Complete Series

.  The six series of Prejudices, published from 1919 to 1927, collected Mencken's essays on the full range of political, literary and cultural issues of the day. As his title suggest, Mencken was one for taking a stand as his own and stating it without equivocation, for the benefit of whoever was equipped to take it in and assess it.   His contempt for those who were not so equipped was on full display in the Prejudices, as was his loathing for all those who would impose their own sentimental prejudices on others by force.  Mencken had no place for overweening self-importance in the powerful, even as he had no particular place for the thought-free "boobs" and rubes who were most frequently the targets of the powerful.

My favorite discovery thus far is that one of the better known Menckenisms turns out to have been inspired by, of all people, Ezra Pound.  It comes from an essay in the First Series of Prejudices, "The New Poetry Movement," and uses the wonderful word "abysmal" in it best sense, meaning "low and bad" but "deep to the point of bottomlessness":

Ezra Pound? . . .  His knowledge is abysmal; he has it readily on tap; moreover, he has a fine ear, and has written many an excellent verse.  But now all the glow and gusto of the bard has been transformed into the rage of the pamphleteer: he drops the lute for the bayonet.  One sympathizes with him in his choler. The stupidity he combats is actually almost unbearable.  Every normal man must be tempted, at times, to spit on his hands, hoist the black flag, and begin slitting throats.  But this business, alas, is fatal to the placid moods and fine other-worldliness of the poet.  Pound gives a thrilling show, but -- . . . .

Fine as that passage is, what I wanted to post here runs more to the political than the poetical. 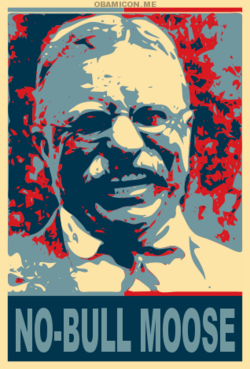 When former President Theodore Roosevelt died in 1919, Mencken published not an obituary but the forensically titled essay, "Roosevelt: An Autopsy."  While largely admiring of Roosevelt -- particularly as compared to then-President Woodrow Wilson for whom Mencken reserved a particularly virulent strain of disgust -- the "Autopsy" is insistent on Roosevelt's character as a brilliant, activist, virile figure, a born manipulator of the masses, but working not for the masses but for benevolent rule over the masses, and with the ultimate controlling Prussian instincts of a Bismarck.

It is a complex and sophisticated argument, and I recommend reading it in full.  The passage that leapt at me is this one, from which I quote at length:

[At] bottom he was against them [the Progressives], and not only in the matter of their specific sure cures, but also in the larger matter of their childish faith in the wisdom and virtue of the plain people.  Roosevelt, for all his fluent mastery of democratic counter-words, democratic gestures and all the rest of the armamentarium of the mob-master, had no such faith in his heart of hearts.  He didn't believe in democracy; he believed simply in government.  His remedy for all the great pangs and longings of existence was not a dispersion of authority, but a hard concentration of authority.  He was not in favor of unlimited experiment; he was in favor of a rigid control from above, a despotism of inspired prophets and policemen.  He was not for democracy as his followers understood democracy, and as it actually is and must be; he was for a paternalism of the true Bismarckian pattern . . . -- a paternalism concerning itself with all things, from the regulation of coal-mining and meat-packing to the regulation of spelling and marital rights. . . .  All the fundamental objects of Liberalism -- free speech, unhampered enterprise, the least possible governmental interference -- were abhorrent to him. . . .  When he tackled the trusts the thing that he had in his mind's eye was not the restoration of competition but the subordination of all private trusts to one great national trust, with himself at its head.  And when he attacked the courts it was not because they put their own prejudice before the law but because they refused to put his prejudices before the law.

In all his career no one ever heard him make an argument for the rights of the citizen; his eloquence was always expended in expounding the duties of the citizen. . . .  The duties of the citizen, as he understood them, related not only to acts, but also to thoughts. There was, in his mind, a simple body of primary doctrine, and dissent from it was the foulest of crimes. . . .

Leaping forward to the present day, and putting aside the more obvious differences between the two figures, of whom are we reminded by that passage, and particularly by the final sentence?  As you may have already guessed, it is the man currently putting the "bully" in the bully pulpit . . . . 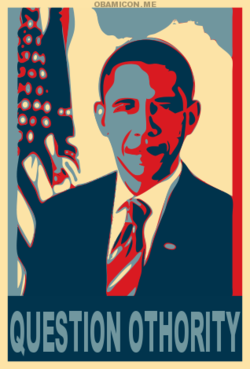 Illustrations by the blogger, with an able assist from Obamicon.me.com.